Welcome Foolish Mortals, to the third and final installation of the Haunted Mansion tombstones. Our tour begins here, with a bit more about the history of how the Haunted Mansion came to be. Kindly step all the way in please and make room for everyone. There’s no turning back now!

Although the concept of a haunted mansion was developed by Walt long before, Disneyland opened in 1955 without one. After an expansion within three years of opening DL, a new land called New Orleans Square was added and provided the perfect spot for what is now the Haunted Mansion. Unfortunately, before the vision would come to fruition, Walt passed away of lung cancer. With the passing of Walt, there was again some controversy about the details; to be or not to be scary. That was the question. In the end, it was Marc Davis and Claude Coats who combined their ideas, so a mix of both spooky and silly can be found on the ride.

As explained in the last article, Ken Anderson was tasked by Walt Disney to devise the story behind the Haunted Mansion. Anderson envisioned different stories for the mansion that include tales of a ghostly sea captain who killed his wife and then hanged himself. A mansion, home to an unfortunate family with a ghostly wake and lots of ghouls and spooks. It was Imagineers Rolly Crump and Yale Gracey who translated Anderson’s stories and turned them into the Haunted Mansion. The Haunted Mansion at Disneyland opened in 1969. The mansion at Disney World is an original attraction since the park opened in 1971. 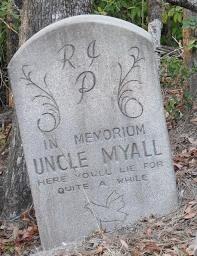 In Memorium Uncle Myall, Here you’ll lie for quite a while

Chuck Myall was an art director who worked on the overall development of Walt Disney World to include the Haunted Mansion and It’s A Small World. He also worked on projects in Disneyland to include Sleeping Beauty Castle, Pirates of the Caribbean, and the monorail. 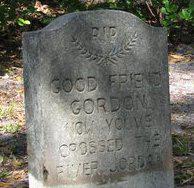 An audio designer and audio-animatronics expert, Gordon Williams worked on many of the classic attractions and created most of the sound effects for Haunted Mansion. 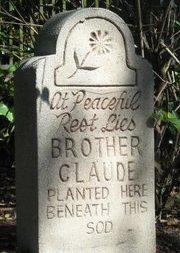 Claude Coats started at Disney as a background artist for Walt’s animated films. As a show designer, he helped bring both Disneyland and Disney World to life and is responsible for designing the interior environments of the Haunted Mansion.

Joining WED (Walter Elias Disney Enterprises – what it was called before Imagineers) after the opening of Disneyland, Bob Sewell ran the Model Shop until his retirement in 1981.

He died in the fall, It’s a fact notwithstanding, But the judges admired his form on the landing

Collin Campbell was an Imagineer who helped on many Disney projects and helped CEO Michael Eisner visualize what MGM (now Hollywood Studios) would look like. Unfortunately, he passed away just one day after his tombstone was erected.

Here lies a man named Martin. The lights went out on this old Spartan

Joining Disney in 1953, Bill Martin was a set designer and art director. He was key in the planning of both Disneyland and Disney World and became the Vice President of Design at WED Enterprises in 1971 and was responsible for the design of the Utilidors and the river boats. 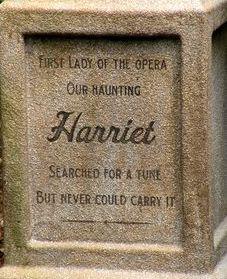 First lady of the opera, our haunting Harriet. Searched for a tune, but could never carry it

Harriet Burns was the 1st woman hired by Walt Disney Imagineering for a creative role instead of an office role. She started painting sets and props for the Mickey Mouse Club show and was involved in the design of the actual clubhouse.

Spectrecom, Speak with the nearly departed. Patented by R.H. Goff

Ralph Harper Goff, better known as Harper, started his career at Warner Brothers as a set designer. In 1951, he met Walt Disney while both were trying to buy the same model train and started working for Disney shortly thereafter. He continued to work at Disney until his death in 1993. 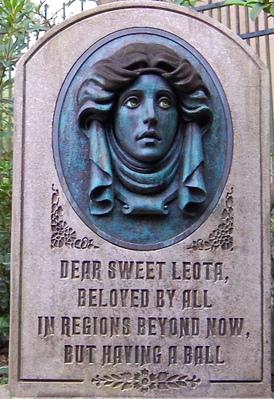 Dear sweet Leota, beloved by all. In regions beyond now, having a ball

Named after Leota Toombs, a WED artist who joined Disney in 1940 in the Ink & Paint Department, this is by far the coolest of all headstones. Leota’s head was used to test the séance room crystal ball, and Imagineers liked it so much that they kept it in the final version. Both the headstone and Madame Leota were done in her honor.

We have reached an unfortunate end. We hope you found this little tour delightfully interesting as we carried you into the boundless realm of the supernatural. Oh! There is a little matter I forgot to mention. Beware of hitchhiking ghosts! 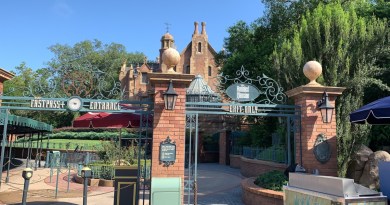 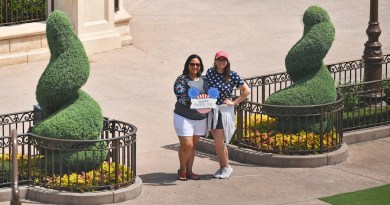 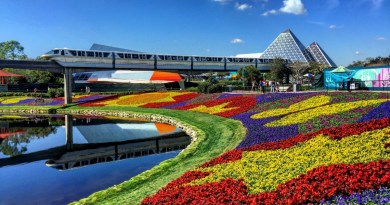 July 13, 2020July 13, 2020 Michele 1
The Main Street Mouse
%d bloggers like this:
We use cookies to ensure that we give you the best experience on our website. If you continue to use this site we will assume that you are happy with it.AcceptPrivacy Policy