From the Oh My Disney Blog 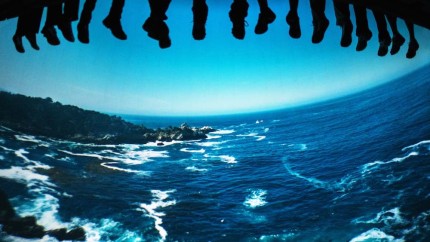 It used to be, when visitors to Disney California Adventure theme park would veer off of Buena Vista Street, headed for Soarin’ Over California, they were greeted with a rather industrial-looking slab of concrete. This was one of DCA’s inaugural lands: Condor Flats, a tribute to the kind of cutting edge aviation projects that would regularly take place along vast stretches of California nothingness. Bold colors of yellow and red dotted the concrete and some kind of experimental jet engine hung precipitously overhead, blowing cool mist onto visitors who would wander underneath. It was impressive in its theming but wasn’t very friendly. Which explains why the land has been completely overhauled and re-themed as Grizzly Peak Airfield. It’s lovely and gorgeous and, yes, totally friendly.

When you turn into the newly themed area, a small wooden sign with the familiar Grizzly Peak logo greets you (the sign captions that you’ll be entering a “Land of Scenic Wonders”). This is modest storytelling on an intimate, personal scale, and with Grizzly Peak Airfield it’s more about the small detail than the grandly redesigned. An icon near the bathroom warns visitors to “Respect Our Park, Do Not Feed the Bears;” a billboard offers that the naturalistic pleasures of the area are “Yours to Enjoy.” An authentic-looking watchtower, perfect for spotting forest fires, has replaced that dangling rocket and much of the signage for the area’s signature attraction, Soarin’ Over California, has been either downscaled or removed completely. The restaurant and gift shop and bathrooms have been made over to fit in with the new environment. And there are trees; lots and lots of trees. It’s lush and inviting and, should you want to slow down and actually relax, a perfect place to cool your jets (pun intended).

Soarin’, too, has been given a facelift: it’s now digitally projected, using cutting-edge laser technology and looks and sounds better than it ever has. (Purists will undoubtedly cry foul at the loss of the original film negative, but gone are problems like a giant dust bunny popping up in the corner of the frame or a wayward hair towering as high as a coastal pine.) Also, Jerry Goldsmith’s score has never sounded better. If you haven’t been on Soarin’ Over California or only ever visited the EPCOT version of the attraction, now is a great time to take another flight.

We got to chat with Ray Spencer, a Executive Creative Director at Walt Disney Imagineering and the man who oversaw the area’s conversion from uninviting industrial space to lush national park.

What precipitated this changeover from Condor Flats to Grizzly Airfield?
I had the honor of being the Creative Director of Buena Vista Street when that was built and early on up at WDI we were thinking about how to help the place making of California Adventure and really create a place that has the immersion and time-and-place at Disneyland, especially on Main Street. A lot of that has to do with guest comfort and feeling like you’re home or feeling like you’re in a place that’s safe. Grizzly Peak Airfield was born of that and a couple of other issues. One of them is that Condor Flats was a high desert airfield. That was the armature that the story was built off of. So we had very flat surfaces; it was sort of an Edwards Air Force Base Test facility sort of place. There were no trees, flat surfaces, with iron and steel all over the place. Everything’s painted tan; I always say that it’s a hot-and-cold. It’s hot in temperature but cold emotionally, because those sorts of industrial things don’t give people the warm fuzzies. Because people were just blowing through there. It had all the elements of the land (it had a restaurant, restrooms, and Soarin’) but compressed into that little place with the Grand Californian hotel as a backdrop, it was sort of a non sequitur there. You couldn’t ignore the fact that this craftsman-style hotel with all of the trappings of a Yosemite Lodge was butted up against this desert environment. It just made a lot of sense to bring Grizzly Peak into that area that was formerly Condor Flats and create an environment where there are trees, there’s shade, the colors of the land is more National Park. And the idea is that, even if it’s 100 degrees outside, we wanted to cool people down and create a place where people can hangout and decompress. That was the genesis of the development of Condor Flats into Grizzly Peak airfield.

When did you start thinking about this switchover?
These conversations started long ago. I was reminded that somebody saw a sketch of mine dated 2006. We’ve been thinking about these things for a long time. So when the opportunity came around for the Diamond Anniversary and Soarin’ getting its new projection and screens. It seemed like a really good time to make that change. We had the opportunity and the financial desire to do that.

What about the other areas of the land? Has the restaurant changed? Has the gift shop changed?
I’ll go through them one-by-one. Our land is now in the time period of the late ‘50s, early ‘60s. This is the heyday of postwar suburbia and people taking road trips to national parks in their station wagons. You’ll find a rambler station wagon full of period luggage and things pulled off the side of the road there. We’ll start with the restaurant. It was formerly known as Taste Pilot’s Grill. Its new name is Smokejumpers Grill, which is named after the brave people that parachute out of firefighting airplanes and land in remote, mountainous terrain and fight these forest fires. So we wanted to pay tribute to them by naming our restaurant after them. The backstory of the restaurant is it’s an old hanger that has been taken over by a loving couple. It’s a place where locals meet, where the smokejumpers gather and can swap stories and have a hamburger. It’s a friendly place. It’s a place where roadside travelers can stop in and have a meal. We’ve got this background music in there that I call Bakersfield country; it’s sort of a twangy steel guitar thing. It has that homespun, home-y feel. It was an important thing for us to do because the earlier version of the restaurant looked very sterile on the outside and on the inside it was very industrial, with safety colors of red and yellow. We really wanted to change that paradigm. We added a new façade and porch overhang and brought it to a much more human and friendly scale. That restaurant is the introduction to the land, and that being the first thing you see we wanted to set the style up front and let people know where we’re going with this. When you see the land, there are a lot of browns and greens. There is no mystery to what environment you’re going in.

What about the other aspects of the land?
Well moving into the land into what used to be called Fly and Buy, the little merchandise shop there. It was styled after a kind of motor pool garage, with a little bit of aircraft maintenance. We have now renamed that Humphrey’s Service and Supplies. It has now taken on the characteristics of a roadside country store or general store. This is the place where, if you were on a road trip to the sierras, once you entered in the park you’d find your map, your camping supplies, the basic needs for your trip. This is where we parked this rambler station wagon. We have an audio track coming from the rambler that has music that back in the day your parents would have listened to. It’s classic easy listening stuff from the late ‘50s, early ‘60s. From a nostalgic point of view it creates a fresh, neat, fun timeline. You’ll see the new graphics out there and, we’re creating in partnership with Coca-Cola, we’ve created an activation area out there called Refreshment Point. It’s a fun little roadside place; it’s warmer, it’s friendlier. At night we have festoon lights draping the facility.

What else is new in this area?
Well we’ve got the fire watchtower, which is sort of the icon of the new land, in the sense that it’s a focal point. What used to be a big rocket motor that misted in the land has been replaced by our fire watchtower. It’s called the Mount Muir lookout and if you look up to the tower there, you’ll see little binoculars and a red phone and some of the things that lookouts would use to keep an eye on the mountains and underneath you see props and interesting display cases that tell the story of good fires, which are beneficial and a little bit about conservation. We’ve got a nice Bambi poster to prevent forest fires from back in that time period. We’ve got a little bit of Disney history in there without being preachy. You probably would have found it in these places naturally without us going over-the-top with it. Walt Disney with the True-Life Adventures way back when was conscious of the environment and was inspired by the sierras and inspired by these different places. We feel that that inspiration is something that we carry forward into the future as well. We’re hoping this area will help us do that.

And the area seems to now have a closer relationship with the hotel.
Yes, the integration with the Grand Californian is complete. Because if you stand at the entrance to the land off of Carthay Circle and look down the rundown, you’ll see the Grand Californian and all of our refreshed buildings in the foreground and it seems like one continuous, animated land. For that, seeing it revealed this morning, it looks very close to the concept art I did but I could never imagine it would manifest itself so completely.

TMSM Avenger has 3447 posts and counting. See all posts by TMSM Avenger

6 Tips To Decorate Your Home Like Disneyland This Holiday

Watch it LIVE! Disney Cruise Line to Unveil New Cruises in 2020 This Thursday