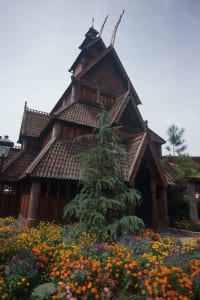 When EPCOT opened in 1982 it brought us what was referred to as a “Permanent World’s Fair” dedicated to the celebration of human achievement and technological innovation. But it also brought us the World Showcase, which gives us glimpses into the cultures of 11 different countries. The Showcase originally opened with 9 countries: Mexico, China, Germany, Italy, The American Adventure, Japan, France, United Kingdom and Canada. Two more were added years later with the Morocco opening in 1984 and Norway being the last to open in 1988.

There were 3 other pavilions advertised in EPCOT Center books and other various materials, but they were never built. These were the Spain pavilion, Israel and Equatorial Africa. In this month’s newsletter we’re going to talk about the last pavilion built (and my personal favorite) Norway. When there were plans being arranged for a new pavilion in EPCOT, a group of Norwegian investors came up with the $30 million needed to fund the project. In June of 1988 Prince Harald formally opened the pavilion.

The ceremony was broadcast in Norway in one of the longest live satellite transmissions the country had ever experienced. It was a dream and seemed almost too unrealistic until the group of private investors had it built. There were original plans to establish a Nordic pavilion that represented the countries of Norway, Sweden and Denmark when the Norwegian company Selmer-Sande and Kloster began work on the pavilion. When negotiations with Sweden and Denmark fell through it was decided that it was going to be a 100% Norway pavilion. On May 29, 1986 Minister Kurt Mosbakk laid the foundation while architect Birger Lambertz-Nilsen was responsible for the exteriors, and Ulla S. Hjort had the responsibility for the design of the interiors. The first years of operation were good years for the pavilion.

Norway was the second most popular pavilion in the World Showcase with 4.5 million visitors, but in 1992 sentiments began to change. The investors that contributed two-thirds of the entire production of the pavilion backed out due to disappointing sales and sold their entire stakes to the Disney Company. As a result the Norwegian government decided to give $200,000 each year to EPCOT in a five-year period. It was renewed for another 5 years in 1997, but in 2002 Norway decided not to renew the contract, despite recommendations from the embassy in D.C. to keep the contract. Knut Vollebaek, Norway’s ambassador to the U.S. said “that is not to say that the Norwegian government disapproved of the pavilion. There were just some forces in Oslo that felt it wasn’t necessary to continue with the support.” He added that he is a great supporter of the Pavilion and that it was so popular with Disney guests that they decided to keep it running even without official support. When the Norway pavilion was being built, the 58,000 square feet Nordic pavilion was designed to look like a coastal village. Bergan, Oslo, Alesund and the Setesdal Valley were used as the inspiration. Being that the sea has played an important role in Norwegian history the designers felt it was important to give it a coastal look.

As you approach the Norway pavilion, one of the first things to catch your eye is probably the Stave Church. It was based upon the Gol Stave Church in Norway. In front of the church you’ll notice a wooden statue of a man. It is Olaf II who was the King and Patron Saint of Norway. He brought Christianity to the people of Norway and with woodworking skills helped the people of Norway build Stave Churches throughout.

When you enter the Stave Church you’ll see a likeness of King Olaf II dressed in traditional Viking clothing. Also inside is a map that showcases exploration routes that the Vikings took throughout Greenland and Newfoundland. Another case has a display model of the Oseberg. The Oseberg is a Viking ship that was discovered in 1904 in a burial mound. This is the same ship featured in the opening scene of the “Spirit of Norway” film, which is shown after exiting the Maelstrom attraction.

The restaurant Akershus Royal Banquet Hall is named after the Akershus Fortress in Norway. The Fortress is also the backdrop of the Norway pavilion. Akershus Fortress in Norway is now used for offices by the Norwegian Ministry and contains the Norwegian Resistance Museum, but originally it was used to guard the city of Oslo. If you look across the walls of the pavilion you’ll see that there are gun turrets located in the wall and atop the structure. The restaurant is a princess character dining experience that showcases Belle, Jasmine, Aurora, Snow White, Mulan, and Mary Poppins. It hasn’t always been a character meal. It originally showcased a more Norwegian flare in food. We ate there once and it was a buffet experience. There was a cold bar that had fish and other food of the sea along with hot food that was brought out to you by the cast member and as you cleared your plate they would bring out some more. But when the princesses took over this dining experience ceased to exist any longer.

So after you eat with the princesses then it’s time to head over to the Maelstrom. This fun and exciting boat ride takes you through some of Norway’s history and folklore. As you walk through the queue line you’ll see Norwegian flags along the way, along with a map showcasing Viking exploration routes. Across from the loading area you’ll see a huge mural. The mural shows Norwegian history and the modern times of the country. Once you board the ride the Norse god Odin tells you that:

“You are not the first to pass this way, nor shall you be the last. Those who seek the spirit of Norway face peril and adventure. But often find beauty and charm. We have always lived with the sea, so look first to the spirit of the seafarer.”

Along the way you’ll see scenes of the Viking women waiting for the men to return and some men unloading supplies for a village. Then you arrive into the troll section. Trolls are part of Norse and Scandinavian mythology. After you encounter the three-headed troll and he sends you away, the boat drifts backwards where we encounter polar bears and more trolls. The boat then drifts towards the edge of a waterfall that overlooks the pavilion and then drops forwards for a 28-foot plunge into Norway oblivion. Not really oblivion but a stormy scene with a big off shore oil rig. The ride continues for a short distance until it reaches port. After departing the ride you’ll enter a theatre. More times than not people bypass the “Spirit of Norway” film, I’m guilty of it and so are a lot of people. Although it is a little dated, the film is pretty good. Being 20 plus years old the film no longer shows the modern nation that the original sponsors wanted to showcase.

After departing the film, what’s the next thing you enter you may ask? Well that would be a gift shop! What? You don’t say. Yes, you’ll then enter the Puffin’s Roost. There is a clothing section that usually has a good bit of jackets by Helly Hanson and other brands. You can also get children’s toys or a book or two. But whatever you do don’t forget to get your picture made with the big troll in the room. There is also a kid cot section in here for those of you who have little ones (or big ones) who like to do this free activity. Also in the gift shop you can pick up a piece or two of fine jewelry or a new fragrance by Geir Ness.

After you have bought a winter jacket, a Viking helmet and sword, sprayed yourself with the perfume testers so you smell good the rest of the day and taken your photo with an ugly troll (not your spouse), head over to Kringla Bakeri go Kafe. Here they serve pastries, sandwiches, and other baked goodies. Behind the bakery you’ll spot a statue of Grete Waitz, she was a Norwegian marathoner that won nine New York Marathons, won a silver medal in the 1984 Summer Olympics and won a gold in the 1983 World Championships in Athletics in Helsinki. She passed away in April of 2011 at 57. That is about it for the Norwegian Pavilion, there are many other things to discover here if you take the time and explore.

March 18, 2016March 18, 2016 Michele 0
Do NOT follow this link or you will be banned from the site!
We use cookies to ensure that we give you the best experience on our website. If you continue to use this site we will assume that you are happy with it.AcceptPrivacy Policy