You are driving into the parking lot and you can see just above the tree line the……… castle*, ball, tree, and hat. They are the third big thing we see when walking in to a park, of course, after security and the turnstiles.

“Wooooow” That is the first word out of most children’s mouths when they see, what some claim to be, the most photographed building in the world. This mammoth building was designed by Herbert Ryman, who also designed another iconic landmark on the east coast. Wanna guess what it is? It took 18 months to build Cinderella Castle and stands at 190ft tall. You may think why not make it 200ft tall a nice round number? Well at that nice round number, in the state of Florida Disney would have had to put an air traffic light. Disney decided that wouldn’t work. All the ducks and ducklings you see in the moat have 3.37 million gallons to swim in.

Now lets look up, there are 27 towers, they are numbered 1-29, numbers 13 and 17 were never built because in the configuration they would never be seen.  The clock in on #10, the tallest is #20, and the third one with the gold roof is #23. Also there is something else you will never see in the air above the castle or anywhere in the Magic Kingdom, airplanes. On Feb. 17, 2009 the FAA set the rules that all aircraft must fly 3,000 feet up and 3 nautical miles (3.5 miles) around the castle. Law enforcement and the WDW Cessna are exceptions. A side note the Cessna used to take off and land were the Little Mermaid rooms at the Art of Animation currently are, this is still considered an official landing location.

This big brick building actually has not one brick in it, the skin is carved gypsum plaster, the same material used in medical casts and 600 tons of steel, to give a perspective the average car has .9 tons (1,800 lbs). To help the steel there is a 10in thick wall of concrete wall, all this is for just one thing, hurricanes. The building can withstand 110 mph winds, or a strong category 2 hurricane. And contrary to popular belief it can’t be moved, it can only be torn down and that would take the better part of three months. 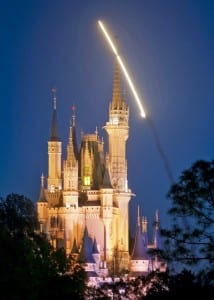 This is one of my favorite pictures, the glowing beam is actually the after-burn of the Space Shuttle Discovery taking off from Cape Canaveral.

If you enjoy playing golf and are 1.2 miles tall than I have the perfect ball for you. The ball as most call it is a puzzle, within a box, inside a circle. I will be completely honest and say I can’t explain the architecture of the ball. I can give you some facts though. It is 18 stories and 165 feet around, but even that changes by a couple inches in the heat and in the cold. There are 11,520 squares but don’t try to count them several are hidden by the legs, signs, and Spaceship Earth. Speaking of legs, there are 6 and they each go 160 feet underground, so you need a really good golf swing to get that thing off the ground.

Here is where the architecture, done by Ray Bradbury, of the ball catches me up but I can give you the basics. The project took 26 months to complete. There are two components to the ball, first the show, which stands separate from the shell, and second the shell which has two layers. The inner layer is a cover for the show parts and the outer is for drainage, and protection for the overall structure. The outer panels are made from two aluminium sheets bonded to a non-aluminium core. The rain falls in to the gaps and is fed into the World Showcase Lagoon.

This is the ride component and the inner shell. 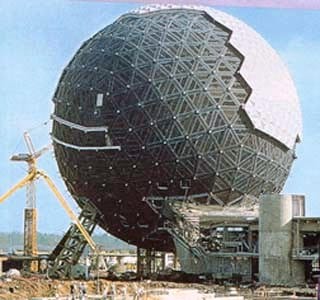 This is the inner shell completed and the outer shell.

The numbers associated with the tree are staggering, but Disney is good at that. The 320+ creatures were designed by 20 different artists. The 103,000, 1 inch leaves spread out over the 165 feet diameter canopy. The artists had to work with such speed most animals were carved in just a couple hours due to the cement drying quickly in the Florida heat.

As will everything at Disney there is a backstory, official or unofficial, in the back roads of Florida nothing would grow but a tiny ant planted a seed and made a wish so the tree grew to protect all the animals of the world. Other ideas considered were Noah’s Ark, but that would have too many religious connotations, and a three story carousel, the top for animals of the air, middle for land animals, and bottom for sea creatures. 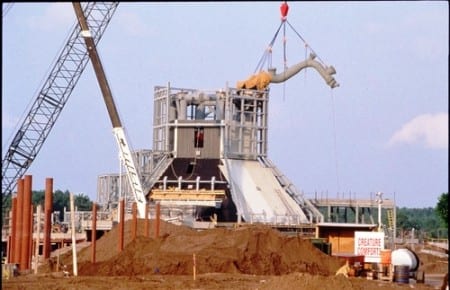 The upside down oil platform getting its first branch.

What is 122 feet tall, 156 tons, and can hold 444,744 gallons of water? The same hat Mickey Mouse got in trouble with in the Sorcerer’s Apprentice. Mickey would have to be 350 feet tall and wear a size 605 7/8 for it to fit him. There is a concrete foundation to protect it from; yea you guessed it, hurricanes. The paint job is done with chameleon paint so as you move the color changes. The ears are made of a new fiberglass material called light ribbon. This is the only icon to not have an attraction in it.

So lets add a little rumors to the mix. The hat was the last icon to be built but why was it last? There are two theories, first Disney wanted the icon for Hollywood Studios to be in the center as you enter like all the others, well the Earfull Tower (which is completely empty by the way) is behind Animation Courtyard. Second the thing people were treating as the icon was not Disney at all, the Great Movie Ride. So it was decided that there needed to be a more Disney icon and there was not better than the hat. As you can see in the picture below the Earfull Tower is not completely gone, here is a sign from the TTC.

*Yes I know you can’t see the castle from the TTC but hey I am trying to tell a story.

2 thoughts on “Four Icons for Four Parks ~ By Dianna Standen”

March 24, 2015April 9, 2020 Scott 0
The Main Street Mouse
%d bloggers like this:
We use cookies to ensure that we give you the best experience on our website. If you continue to use this site we will assume that you are happy with it.AcceptPrivacy Policy