There are loads of changes going on at Walt Disney World and that is to be expected when the founder says “It’s something that will never be finished. Something that I can keep developing…and adding to” and “Disneyland will never be completed. It will continue to grow as long as there is imagination left in the world.”

Several times in the last couple months my husband and I have talked about how Disney’s Hollywood Studios (DHS from here on) needs a major update or renovation.

Below is a current map of DHS.

Just for fun here is a map from when the park first opened.

So below is what I would do with DHS, assuming unlimited money and resources. I want to make very clear this is my ideas; NONE of this is official or even officially a rumor. This is what I would want to see happen.

The shaded orange area would become Pixar related with a title like Pixarland, though that sounds too cheesy. I also like Pixar Place and World of Pixar. Since it runs like a street, so Pixar Ave, Ln, Blvd, or St would work as well.

The shaded white area would become Star Wars World. This part would be easier, since part of it is already done. I will admit I know very little about the Star Wars universe, so I am sure this could be a more detailed longer list.

Other notes: I think the Streets of America could be expanded to Streets of the World, or add more streets, like New Orleans and Miami. I don’t think the Backlot Tour should close completely, but just shortened. I would like the storage room and walkthrough costume room moved to the Animation Courtyard or closer to the Great Movie Ride or even use it as a queue. I would also like the see a pathway connecting the Rockin’ Roller Coaster courtyard to the back of Animation Courtyard; I think this would help the traffic flow up and down Sunset Blvd better. I see it acting as an outer rim on a wheel.

What do you think? What do you want to see stay, go or be added? Leave your comments in the comments.

Oh and one more old map: 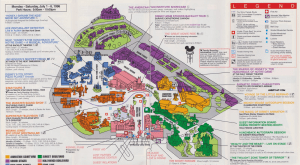 Mickey’s ONCE UPON A CHRISTMASTIME Parade 2014 Multi Angle PANDAVISION

November 8, 2014April 13, 2020 Michele 0
The Main Street Mouse
%d bloggers like this:
We use cookies to ensure that we give you the best experience on our website. If you continue to use this site we will assume that you are happy with it.AcceptPrivacy Policy