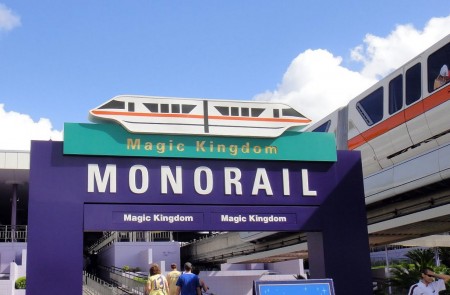 “The Highway in the Sky”
By: Dianna Standen

“Please stand clear of the doors: Por favor mantengase alejado de las puertas”, how many times have you heard that line? If you are like me you could repeat it in your sleep. Well I am here to give you a little behind the scenes look at the highway in the sky. I’ll start with Mary Poppins; yes Mary Poppins as in the movie with Dame Julie Andrews. All the profits from the movie paid for the monorail system.

First a few numbers. The total track in 14.7 miles long among the 3 tracks, the trip to Epcot is 4 miles. The express monorail runs clockwise in on the outside track, in the clockwise direction runs the resort monorail on the inside line. The 26” wide tracks hold the almost 9’ wide cars. With an 11 ½’ foot tall inner roof even the big kids can stand up straight. The whole system can move 7,000 guests per direction per hours, in layman’s terms, a heck of a lot. There has been rumor that Disney’s Hollywood Studios and Disney’s Animal Kingdom would be added to the monorail system. As much as guests have said they would love it there is no plan to make this expansion in the future.

We all see the different color trams and they are the colors to tell them apart. Numbers or letters would be too hard to see from a distance and with color the whole monorail can be identified from a longer distance away. The twelve colors are: peach, teal, red, coral, orange, gold, yellow, lime, green, blue, silver, and black. Now the green and the lime and the pink and the coral and the blue and the teal look really similar so the lime, coral, and teal have deltas painted on each car to distinguish them. Another new addition are the skins added to certain monorails, so far we have seen; Tron on the coral,  The Avengers on the red, Iron Man on the black, and Monster University on the teal.

Everyone is worried about safety, and riding on one beam dozens of feet in the air I will admit makes me a little weary. Between 1989 and 1991 the monorail were upgraded from Mark IV to Mark VI. The Mark VI has upgrades in both comfort for passengers and safety for everyone. The guest noticed the new larger cars and a whole extra car added, also the A/C was upgraded. The drivers have better communication, control, and monitoring.

Each of those columns holding the track up do a lot more than keeping the ‘highway in the sky’ in the sky. They are a hold point, basically a red light every 500’ – 1000’. Two cars have to be at least 2 hold points apart, but 3 are preferred. If they are less than two the brakes on the monorail kick in and all forward propulsion is stopped and will not let the monorail move until there is a safe distance. This safety system is called the MAPO (referring to MAry POppins). There are also three ways to evacuate any monorail and there are also three work tractors that run on diesel, in case power is out. This is only a fraction of all the safety features the monorail and drivers have to keep guests safe.

I will not sugar coat it there has been one serious accident involving monorails. It was about 2am while one monorail heading into the shop and one being approved to go into a station when the other was not out of the way. One drive was killed and the other went to the hospital, the only passengers were one family. OSHA and other safety boards investigated the accident and the whole system before the monorail system reopened. The two monorails, purple and pink, were retired and the teal was created of the salvageable cars and cabs. To bring the fleet back 12 monorails peach was added with two new cabs and cars repaired from the purple and pink. Due to this accident guests are no longer allowed to ride in the front cab.

Cars have garages, ships have shipyards, and trains have stations, the monorails have a shop also. The shop can hold 10 monorails at a time (but remember there are 12 monorails); the other two can ‘sleep’ at any of the stations. A monorail will not stay out for two nights in a row because there is an inspection done nightly . If the weather is freezing or at any extreme the two out will stay in the Contemporary Resort since it is the only enclosed station.

*This information is only for Walt Disney World in Orlando, FL.