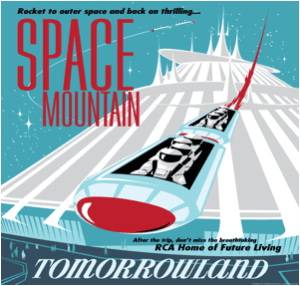 This is the eighth and final of my articles are about the E-Ticket rides. For those of us too young to remember, the E-Ticket was the most coveted ticket in the ticket book a guest would buy. E-Tickets were for the biggest and best rides in the park. In June 1982 the ‘ticket’ system was replaced with the current system.

E-Ticket: Keep Your Hands Inside the Car

Frank was an adrenaline junkie, you put a roller coaster in front of him and he had to ride it. His favorites included Big Thunder Mountain, Matterhorn, Dinosaur, Expedition Everest, Aerosmith’s Rockin Roller Coaster, but of course the classic Space Mountain. This is Florida’s oldest operating coaster, opening in 15 January 1975. With no upside down loops and only going 29 mph, many wonder how it can stay so popular.

Space Mountain has been well maintained over the years. In 1989 all the cars underwent a large renovation. In August 2010, 60 new speakers were added, the rail was replaced and the cars got a fresh coat of paint. In the years in between the ride was kept up-to-date. As the jokes go around the ride does break down a lot, for so many reasons.  There are two tracks Alpha and Omega, and contrary to popular belief the tracks are not exactly the same. Alpha on the left is 10ft longer, this helps with loading and unloading.

{This is another attraction I have a special place in my heart for. If you read the last article you know I was a cast member for a little while. As part of a job well done, after a week of training we get a couple hours in the park with no guests, that includes Space Mountain……….with the lights on. That was exhilarating and terrifying at the same time. As everyone knows the Alpha and Omega tracks cross above and below at several points, that is where it gets scary, if you are like me and put your hands up it appears that your hands will hit the rail above. You can convince your brain that your hand won’t hit, and they won’t hit, but your natural reaction will tell you that you will hit your hands. It took me several months to be able to ride it with my hands up and I am still a little scared to do it today.}

Frank loved the ride and secretly hoped one day that he would get to ride it with the lights on.

~~Thank you very much for taking the time to read my articles. Keep an eye out for future articles about such things as; AAs, tips, transportation, show/parades, Disney’s Nine Old Men, and the Cruise Line.

March 8, 2017March 8, 2017 Michele 6
Do NOT follow this link or you will be banned from the site!
We use cookies to ensure that we give you the best experience on our website. If you continue to use this site we will assume that you are happy with it.AcceptPrivacy Policy