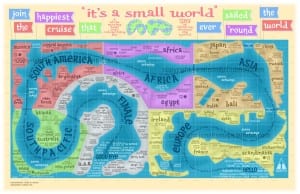 This is the sixth of my articles are about the E-Ticket rides. For those of us too young to remember, the E-Ticket was the most coveted ticket in the ticket book a guest would buy. E-Tickets were for the biggest and best rides in the park. In June 1982 the ‘ticket’ system was replaced with the current system.

E-Tickets: Oh That Song is Stuck in my Head

As Peggy neared the entrance of the brightly painted building, she heard that song. She knew the moment she heard it that it would be stuck in her head for days. That song was written by the Sherman Brothers. It was originally written for the UNICEF booth at the 1964 World’s Fair under the original title Children of the World. This is the same song heard at all five parks around the world.

Mary Blair is the designer of the whimsical world, Peggy loved so much. Mary also designed the mosaic inside the Contemporary. To help promote the message of unity all 289 audio-animatronics have the same face shape, the color is what makes each unique.

“The Happiest Cruise That Ever Sailed the Seven Seas”, the slogan for the Walt Disney World version, went under a major renovation from May 2004 – May 2005. All 500,000 gallons were emptied so the whole ride could get a major update, new paint, new AAs, new costumes, new audio, new queue and repainted boats.

Peggy did love the song, she knew it in all five languages; English, French, Japanese, Spanish, Swedish. Even after the 1,085 foot long boat ride was over Peggy would sing the song just to drive her siblings crazy.

Next: Nothing to See Here with Edward, Peggy’s grandfather

March 5, 2015April 16, 2020 Michele 0
The Main Street Mouse
%d bloggers like this:
We use cookies to ensure that we give you the best experience on our website. If you continue to use this site we will assume that you are happy with it.AcceptPrivacy Policy