An all-new “Eternals” promo just dropped and it’s confirmed some super news: the fact that Superman exists in the Marvel Cinematic Universe!

Marvel’s “Eternals” is only a month away from its release in theaters and as Disney begins increasing its promotion of the film a new commercial recently released acknowledging the existence of one of the most iconic DC characters of all time. However, from what we’ve gathered so far, he probably won’t actually appear in the film.

In the new commercial, we get a breakdown of the main characters in the Eternals group. Upon coming to the part of Ikaris (Richard Madden), a scene is played showing Ikaris and his partner Sersi (Gemma Chan) trying to reunite with their old teammate Phastos (Brian Tyree Henry). In the film, Phastos lives a more human life, living in the suburbs with his family. In the scene included in the commercial, Phastos’ son Jack recognizes Ikaris from a TV broadcast of the Eternals at battle and compares him to the caped superhero.

“Dad, that’s Superman with the cape and you were shooting laser beams out of your eyes!”

The line is just a joke and not in anyway revealing an upcoming crossover between these Marvel and DC characters.

The film recently had its premiere in Hollywood and has already been met with outstanding reviews. The movie has been referred to as a “shocking masterpiece,” and its director Chloe Zhao has received much praise.

Erik Davis, who works for film sites Fandango and Rotten Tomatoes, said the film is “spectacularly weird” and “rich,” writing, “It’s honestly refreshing. There’s a bittersweetness to the film that you feel in its sunset shots – a definite Chloé Zhao touch. It is soulful & thoughtful.”

Will you be heading to theaters November 5 to see “Eternals” when it premieres in theaters? Let us know in the comments! 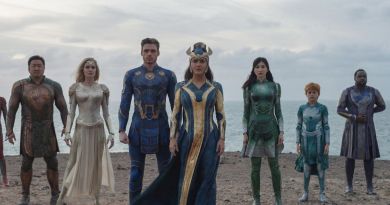 ‘Eternals’ Is Streaming on Disney+ for Free for Users Starting Tonight!

October 4, 2021October 4, 2021 Michele 0
The Main Street Mouse
%d bloggers like this:
We use cookies to ensure that we give you the best experience on our website. If you continue to use this site we will assume that you are happy with it.AcceptPrivacy Policy