Left or right? The question we often ask ourselves when we begin our way to the World Showcase. To the right, we have the United States northern neighbor Canada and to the left, we have our southern neighbor Mexico. Which way do you choose? Me, I often like to make my way around the promenade clockwise beginning with Mexico. I just love the look of the 36-foot high pyramid that greets you as you cross into World Showcase. 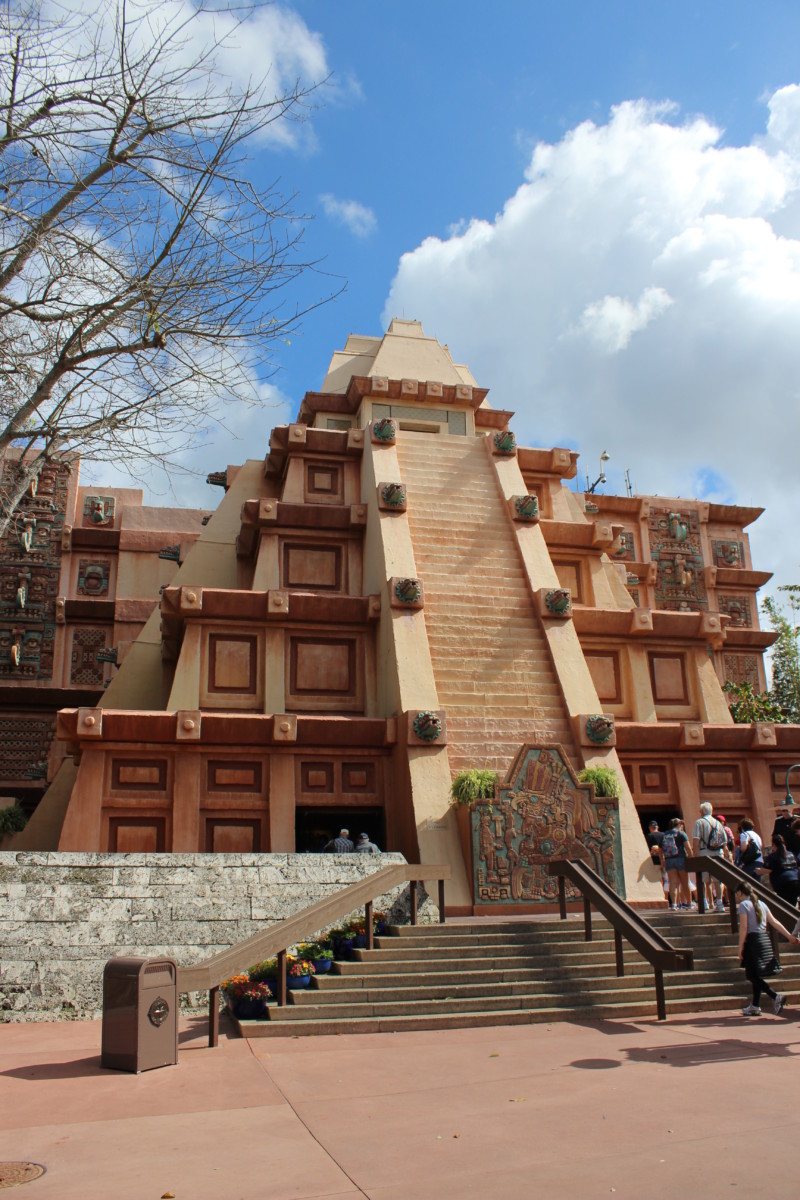 Along with Canada, France, China, Italy, Japan, Germany, the U.K. and U.S.A., Mexico was an opening day country. Collin Campbell who was a theme park conceptual artist supervised the design of the Mexico pavilion. It was the only pavilion with a ride and this became immediately apparent with guests. More rides had been proposed during the planning phase but unfortunately had to be eliminated due to cost restraints. Even the Mexico ride had to be shortened to budget.

A composite of Mesoamerican motifs dating back to the 3rd century, the pyramid leads into an 85,000-sqaure foot pavilion. The serpent heads leading up the staircase represent Quetzalcoatl, the god of intelligence and self-reflection. The serpent heads also protect the high priest at the top of the structure, which in reality is the control booth for Illuminations. At the base of the pyramid’s steps, you will find a carving of the Mayan King Bird-Jaguar. These types of carvings were used in funerals and as territory markers.

Once inside the pyramid, you’ll enter a room that is styled after a Mayan Ceremonial Hall. Here you can find the Mexico Folk Art Gallery, which contains various displays of Mexican arts and crafts. The very popular Animalés Fantásticos: Spirits in Wood can also be found here. This exhibit honors the Oaxacan wood carvers who believe that when they carve a wooden figure, they unleash the spirit of the being that is being carved from each piece of wood. All of the figurines are hand carved of wood from a copal tree that is found in the hills of the Oaxacan Valley of Southern Mexico. The figures can be grouped into 8 categories that teach you about the daily life and civilization of Oaxacan cultures. They are:

The Sun Stone leads the way into the Plaza de los Amigos or the Plaza of Friends. Made to look like an open-air market in the nighttime, here you can find the Fuente de la Vida or the fountain of life. While you walk around take your time to shop at some of the various carts and kiosks. If pieces of crystal are your thing, go into La Princesa de Cristal and see what’s new inside. This whole area is really neat to browse through and take pictures wearing sombreros or possibly a picture with Donald Duck. Outside the pavilion are a few other shopping kiosks like the El Ranchito Del Norte, which offers various t-shirts, and the Ring Carvers where you can purchase a unique ring that bears your initials. 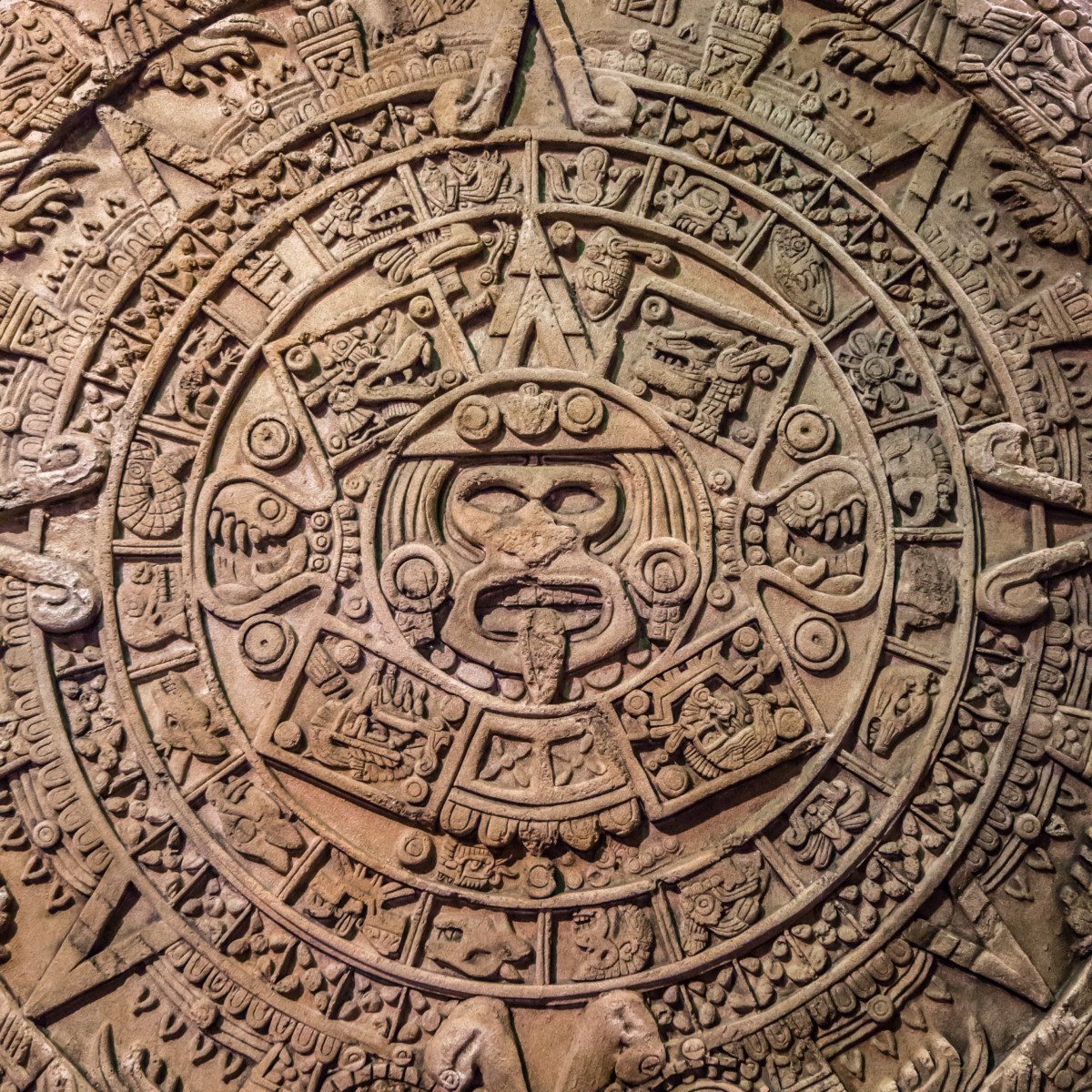 If eating and drinking is your goal then the Mexico pavilion is hard to beat. Located inside is the San Angel Inn Restuarante. Here you can dine in the dimly lit pavilion and overlook the El Rio del Tiempo (The River of Time). Sit back and relax and enjoy traditional fares like Enchiladas or Tacos. Also inside the pavilion is La Cava del Tequila, which is a tequila bar that offers over 200 different varieties. They also have cocktails, beer, and wine. Outside and across the way from the pavilion is another sit-down restaurant, La Hacienda de San Angel. This dining experience is also on the waterfront and offers authentic Mexican cuisine and in addition to margaritas. Another option is the counter service spot, La Cantina de San Angel, you can grab a taco, a churro or….a margarita.

If the timing is right, walk over to the right of the pavilion and say Hola to everyone’s favorite duck, Donald and get a quick photo and autograph. Then be on the lookout for the local band Mariachi Cobre. This mariachi band plays the traditional music of Jalisco, Mexico.

On opening day there was only one ride throughout the World Showcase and that was El Rio del Tiempo. It was an 8-minute boat ride that brought guests through the three cultures of Mexico. These were the pre-Columbian, the Spanish-Colonial and modern Mexico. Three scenes were presented on big screens. As guests floated by each screen representations of dances were viewed. The first scene was “Nature and Science” and this scene paid tribute to the ancients’ and their understanding of man’s association with the universe. The second screen was known as “Mathematics and Astronomy”. This scene dealt with the Mayans and their understanding of the concept behind the number zero. And the last scene was known as “Quetzalcoatl and Tezcatlipoca” which represented the eternal battle of good and evil.

Passing through the archway visitors came into the “Festival of Children”. This scene is very reminiscent of “It’s a Small World” with child-like doll animatronics showcasing Mexican dancing and music. The “Day of the Dead” scene pays tribute to memories of the deceased. The next scene revealed several screens with locals trying to sell the passersby’s goods as the boats drifted by. The boat then came into an open room with fiber optic fireworks and the ride’s theme song playing throughout. The legendary X. Atencio wrote the song that played until coming to the end of the ride. 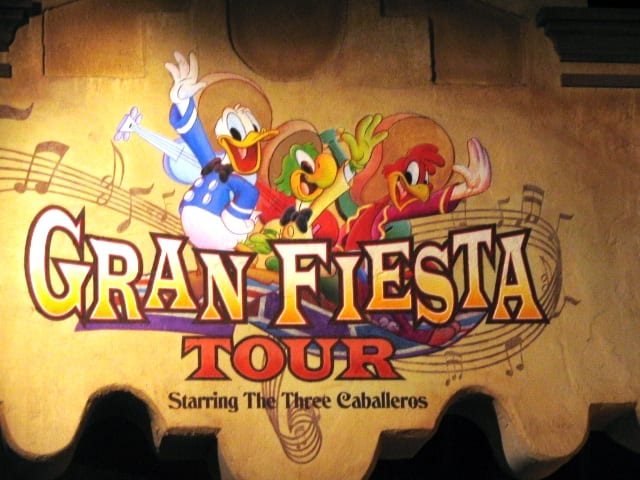 In 2007 the ride experienced an overhaul. The ride had begun to lag in attendance so Disney decided to add a few characters to the attraction. The boat ride reopened as the “Gran Fiesta Tour Starring the Three Caballeros”. The attraction would now star Donald Duck, José Carioca and Panchito Pistoles from the 1944 animated feature The Three Caballeros and the 1942 movie Saludos Amigos. Much of the internal ride structure remained the same. Now during the ride, we help Panchito and José look for Donald and make it to Mexico City in time for the concert they are to perform. New scenes involving the search for Donald replaced all of the films that were shown on the screens in the previous version of the attraction.

Get a Great Deal on The Main Street Monthly this Weekend! #mothersday