There’s no denying it. Captain America: Civil War, opening this Friday in theaters nationwide, is the most epic Marvel movie yet. And this is really saying something. Because it’s not the spectacle that makes Captain America: Civil War so thunderously awesome (although that is a part of it—and I’ll talk about that in a minute), but it’s the emotional undercurrents of the movie that leave the biggest impact. This isn’t only the most epic Marvel movie yet, it’s also the most emotionally acute.

From the beginning, Captain America: Civil War sets up the fact that this is a movie that turns in on itself at every juncture. This isn’t about fighting space aliens or sentient robots, it’s a movie about the internal struggles, not just of superheroes but, of mortal men as well. Yes, the titular civil war divides your favorite costumed heroes against one another, but it’s nothing compared to the struggle being waged within.

The movie opens with a gut-punching action sequence set in Lagos, Nigeria. It’s here that Captain America’s newly assembled Avengers, among them Scarlet Witch (Elizabeth Olsen), Falcon (Anthony Mackie), and Black Widow (Scarlett Johansson), race to stop Crossbones (Frank Grillo), a former S.H.I.E.L.D. agent-turned-villain (towards the end of Captain America: The Winter Soldier). It’s here that, during the fight, some civilian lives are lost, putting into context the other big, calamitous battles Earth’s Mightiest Heroes have been involved in.

Steve Rogers, aka Captain America (Chris Evans), is torn, but an equally anguished Tony Stark, aka Iron Man (Robert Downey, Jr.), thinks he has a solution: the Sokovia Accords (named after the fictional European nation ravaged at the end of Avengers: Age of Ultron), which would make the Avengers’ brash style of derring-do a government sanctioned affair. Stark pushes for it, especially after another terrorist attack leaves a prominent world leader dead, while Rogers thinks it’s a bad idea. Lines are drawn. The Civil War has begun.

And what a war it is. 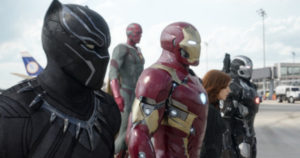 Soon, superheroes are aligning themselves with either cause. If you’ve seen a poster for the film, you know how this shakes down, but it bears repeating: The Vision (Paul Bettany), War Machine (Don Cheadle), and Black Widow join Iron Man, with some assistance from a vengeance-hungry Black Panther (Chadwick Boseman) and a newly recruited Spider-Man (Tom Holland, more on him in a minute). On the other side of the aisle, Winter Soldier (Sebastian Stan), Falcon, Scarlet Witch, Ant-Man (Paul Rudd), and Hawkeye (Jeremy Renner) join Captain America.

Even with Thor and Hulk out of the picture, this is already the most character-rich Marvel movie ever. But what makes Captain America: Civil War such a glorious feat, is how deftly it handles all of these characters. There isn’t a single character that feels like they’ve been shortchanged, or undervalued. Each hero has a very specific role to play, and each character is different at the end of the movie than at the beginning. It’s a truly transformative experience.

When the characters finally do clash … whew. The less you know about the actual battle before you see it, the better, but it’s a 17-minute melee that was filmed using cutting-edge IMAX cameras, so if you see it the movie on an IMAX screen (and, you really should), then the entire aspect screen will be taken up with superhero-battling mayhem. This isn’t just the centerpiece for Captain America: Civil War; this may be the centerpiece for the entire Marvel Cinematic Universe thus far. It really does feel like the culmination of every movie up until this point, every insecurity, slight, or hidden resentment, aired out in one of the most imaginatively choreographed sequences in the history of comic book movies. Joe and Anthony Russo, who directedCaptain America: Civil War, called that sequence the “splash panel” when I talked to them at the junket and later at the premiere. A splash panel in a comic book is a giant frame, sometimes utilizing both pages, showcasing a giant action moment. This fight sequence certainly constitutes that. 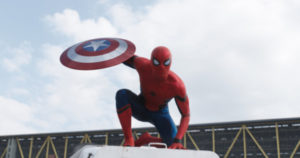 Again: details will be spared, but this is the greatest big screen Spider-Man ever. Tom Holland totally inhabits the character, who is equal parts nerdy and ambitious and—for the first time—just as much of a motor-mouth as he is in comic books. He’s in the movie for longer than you’d expect him to be, and his introduction was met with thunderous applause from the audience when I saw the movie with about a month ago. This sets the bar pretty high for Spider-Man: Homecoming, the new movie with Holland as Peter Parker, out next summer (it also features Downey, Jr., reprising his Iron Man role).

But the giant kerfuffle isn’t what makes Captain America: Civil War so epic. It’s that immediately after this sequence, the stakes go back to being incredibly personal. As the movie goes along, through its gut-wrenching third act, it gets tighter, more contained, more personal, and yes, more epic. Because there are the epics that emphasize grandiosity at the expense of character or heart and then there are the epics that really take you on a full and complete emotional journey, where you understand previously established characters in deeper, more profound ways. That’s the kind of epic Captain America: Civil War is—it’s a huge movie, for sure, full of the wonderment and thrills you expect from a Marvel movie. But it also feels bigger and more consequential in ways that are entirely emotional. It’s the rare epic that cares more about its characters than its exploding scenery.

How Well Do You Know… Disney Ghosts?

All in the Details: Behind the Haunted Mansion’s Tombstones

October 24, 2018April 16, 2020 Guest Blog 0
The Main Street Mouse
%d bloggers like this:
We use cookies to ensure that we give you the best experience on our website. If you continue to use this site we will assume that you are happy with it.AcceptPrivacy Policy