When Shanghai Disneyland was unveiled a few weeks back, we were bowled over. This is going to be a really unique park, one that embraces Chinese cultural heritage while also pushing things forward both technologically and on a storytelling level. And of course, we wanted to learn more about the Shanghai Disney Resort, so we headed to the official website and discovered lots of new details about various aspects of the resort, relating to everything from ride vehicles to highly themed restaurants (and everything in between). These additional details, of course, have us even more excited.

So let’s go through the lands once again and see what else is in store, come the spring of 2016! 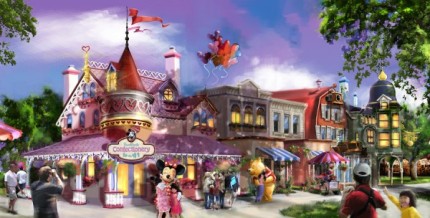 This land, just inside the entrance to Shanghai Disneyland, is the premiere corridor for the entire park. It’s cheerful, bright, and fun, with an emphasis on the classic Disney characters that audiences around the world know and love. As we said before, the Avenue M Arcade will feature the largest selection of gifts and accessories in the park, but what we didn’t know then was that everything about it is themed to the max, including the checkout area, which is centered around Scrooge McDuck. There are new details about the Mickey & Pals Market Café, which we know is designed like an open-air market where guests can choose a table in one of four themed dining rooms (Mickey’s Galley, Tony’s from Lady and the Tramp, Daisy’s Café, and the Three Caballeros). But that’s not the only place to grab a bite. There is also Remy’s Patisserie, a French-inspired bakery based on characters from Brad Bird’s brilliant Ratatouille (be sure to look closely, at the tiny scaffolds and ladders that line the walls, as proof that Remy is hard at work). And don’t forget about the Sweethearts Confectionary, a sweet shop representing the childhood home of Minnie Mouse. Mickey Avenue definitely sounds like the most mouth-watering land.

As we pointed out in our earlier post, this is the most interesting “land” and the most traditionally Chinese, as this is the place where guests can stop and appreciate the “wonders of nature and joy of imagination.” We already mentioned that this is the place where guests can ride the Fantasia Carousel and Dumbo the Flying Elephant, wander around seven uniquely themed gardens, and experience both the Ignite the Dream nighttime spectacular and Mickey’s Storybook Express, a daytime parade that will feature the longest route in a Disney park. This section of the park also features the Wandering Moon Teahouse, a teahouse that honors the restless creative spirit of China’s wandering poets; this quick-serve location will feature Chinese dishes and recreate authentic Chinese architecture. 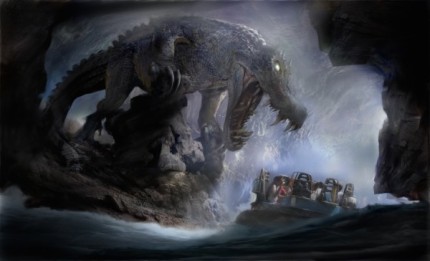 We ran down all of the major points of this land, like the new variation on the Soarin’ attraction and the Roaring Rapids raft ride. But the site does offer some more details, like how the giant monster in Roaring Rapids (seen above) is named Q’araq and the inclusion of the Tribal Table, a festive restaurant that promises guests a “sensory dining experience.” This means that sights, sounds, and smells will permeate the restaurant, modeled after an ancient gathering house in the Arbori village (adorned in murals, artifacts and illustrations). Everything about Adventure Isle will be adventurous and unexpected. 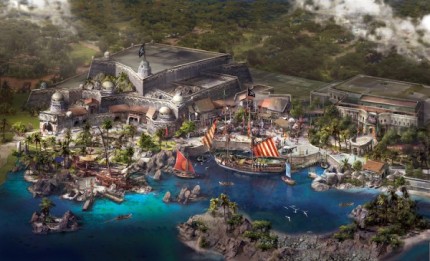 The first pirate-themed land at a Disney park, which will feature Pirates of the Caribbean: Battle for the Sunken Treasure, a new take on the classic boat ride, as well as Eye of the Storm: Captain Jack’s Stunt Spectacular, a live stage show at the El Teatro Fandango. There will also be Explorer Canoes, which will allow guests to take to the water, as well as Shipwreck Shore, a water play area located onboard the remains of a shipwrecked French galleon and the surrounding beach. Treasure Cove is also home to one of the largest restaurants in all of Shanghai Disneyland, Barbossa’s Bounty. It’s a lively “grog shop,” this specializes in spicy barbeque (the pirate chefs show off in a demonstration kitchen), and guests can dine in a themed dining room of their choosing or inside the Pirates of the Caribbean attraction (a la the Blue Bayou at Disneyland). The official site also makes mention of the Pirates of the Caribbean: Battle for the Sunken Treasure’s high tech ride system (premiering in Shanghai). According to the site, the boats are “able to spin, move and react smartly to their position, triggering action and synchronized music as they travel through breathtaking scenes and lively battles.” And with that, we purchase our plane tickets to Shanghai!

Most of what we learned about Tomorrowland was about the TRON Lightcycle Run, the thrilling, roller coaster-type attraction themed to Disney’s beloved sci-fi classic. And while a Buzz Lightyear ride and Jet Pack attraction were teased, there is now more concrete detail and it is super exciting. Buzz Lightyear Planet Rescue is the next iteration of the popular Buzz Lightyear Astro Blaster/Space Ranger Spin system, but with an “immersive, new storyline combined with a new, interactive targeting system.” This attraction also features new ride vehicles (called Space Cruisers), animated targets, LED screens, and real time feedback from the targeting system. (We’ll start practicing now.) The Jet Packs attraction also has a more detailed rundown. As the site says, guests will be “strapped into individual Jet Packs, with legs dangling.” At the center of this attraction is some kind of “energy sphere,” which spins faster and faster as the ride progresses. What’s so neat about this one is how interactive it is, as guests can control how high their jetpack goes and how dramatic the pitch of their vehicles is. Also in this land is Star Wars Launch Bay, which is a kind of meet-and-greet mixed with a museum, promising immersion into a “state-of-the-art cinematic experience.” The Marvel Universe is a similar experience, with a chance to meet the famous superheroes, as well as being briefed on a “multimedia mission,” while you can also learn to draw some of the characters. Rounding out the land is the Stitch Encounter, with guests engaging in unrehearsed banter with your favorite cuddly alien and the Stargazer Grill, located at the upper concourse of Tomorrowland. Not only will it be the largest restaurant in the theme park, offering spectacular views of the rest of Shanghai Disneyland, but the design will be incredible, with a curved ceiling and glass orbs of twinkling light. We can’t wait for Tomorrow(land). 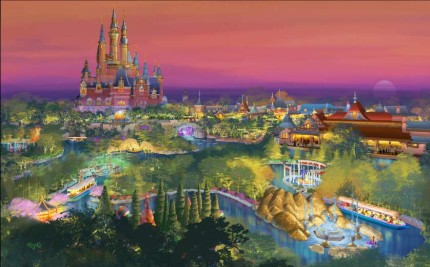 This is it: the largest land in the park and home to classic favorites like Peter Pan’s Flight (featuring a brand new “inverted-coaster ride system”) and the Seven Dwarfs Mine Train, as well as the Voyage to the Crystal Grotto (an excursion through the waters of Fantasyland, complete with colorful fountains, wonderful music and a spin underneath the Enchanted Storybook Castle) and Hunny Pot Spin, a Winnie the Pooh-themed attraction where guests board whirling honey pots. There will also be an Alice in Wonderland-themed maze (the first attraction at a Disney park themed to the Tim Burton version of the story), featuring delightful surprises around every corner, and “Frozen: A Sing-Along Celebration,” located at the Evergreen Playhouse. Maybe most excitingly forTangled fans is the Tangled Tree Tavern, inspired by the Snuggly Duckling from the recent animated classic. We’ve got a dream … to go to this restaurant.

If there was anything that could get you more excited about the opening of Shanghai Disneyland (and the entire Shanghai Disney Resort), then this should do it. These new details offer an even more specific view of what the park will be when it opens in the spring of 2016. This is going to be a park that pushes the boundaries of technology and storytelling, offering a brand new Disney experience while staying true to Chinese heritage.

Scott has 3487 posts and counting. See all posts by Scott

Watch the Ride Through of Pirates of the Caribbean, Shanghai Disneyland

Spider-Man Is Back In The Marvel Cinematic Universe!!!

June 29, 2014April 16, 2020 Scott 0
Do NOT follow this link or you will be banned from the site!
We use cookies to ensure that we give you the best experience on our website. If you continue to use this site we will assume that you are happy with it.AcceptPrivacy Policy