You may have noticed that I am not Addie. Not to worry, Addie will be back next week. But I will be joining her as a runDisney contributor, as my life for the next 18 months will be more or less totally consumed by runDisney training and events, but that endeavor will be the topic of a future article.

Today I will be your guide through last weekend’s farewell run of the Expedition Everest Challenge. 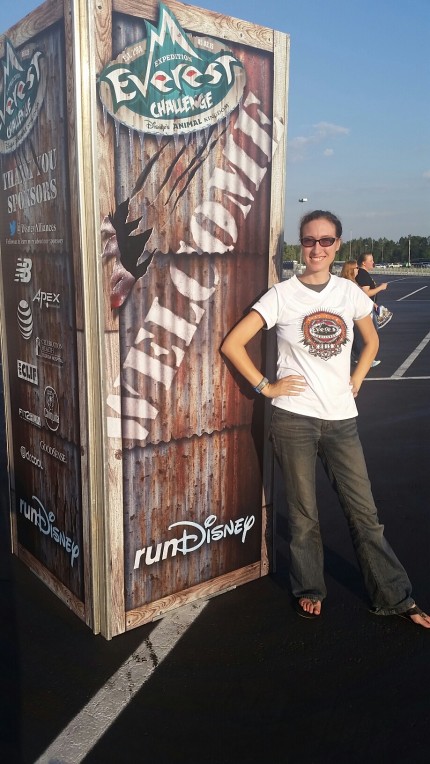 Expedition Everest Challenge was a unique experience, and unlike any other runDisney event in almost every way.

The Expo
Unlike other runDisney events, Everest didn’t really have a proper expo (although I gathered from runners who have done this event in years past that it has pretty much always been this way). It was just a few tents set up in the Butterfly section of the Animal Kingdom parking lot. The major sponsors (Fit2Run, New Balance, Good Sense) all had tents or tables, and there was a trailer set up where they were selling the “I Did It” shirts and a very limited selection of merchandise (RunDisney Hats, the race Pin, and lanyards).
The shirts sold out pretty quickly, by mid-day on race day they were gone. Thankfully we picked up our packets before they had sold out, so I was able to purchase one (and for those of you who are wondering, I was able to use my AP discount on that purchase, however I did not ask at the New Balance tent if I could use it the shoes). Once they sold out they started doing on demand printing on white tee shirts, which in my opinion were not nearly as nice.
Packet pickup up was painless. We had printed off our wavers at the hotel so we were able to walk right up to the booth and get our bibs, however they did have 2 or 3 computers with printers for those who had forgotten their wavers, and there was more of a line for that than there was at the booths. My husband and I ran as a team, so we both had to be there to pick up our packets, even though only one of us would have a timing chip, since we were expected to run and finish together (which created a bit of confusion since I thought we were both going to have timing chips). Once we got our packets and the pin I pre-ordered, we went to the other side of the tent to get our gEAR check bags and race shirts.
Our gEAR bag had a few things in it: a mini CliffBar and a few coupons/fliers for some of the sponsors, and the final race instructions (which I had already read, as they were available online about 30 days before the event).
Once we had gone through all that we had a look at the course map and took a minute to solve the sample clue: 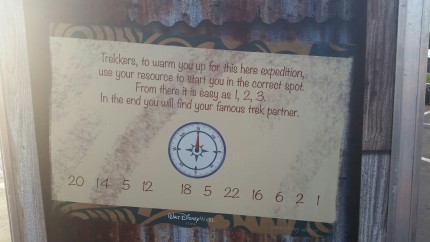 Then headed back to our hotel.

Pre-Race
Unlike most RunDisney Events, the Expedition Everest Challenge was a night race. Because we were staying off property, we decided to arrive just after sunset so we didn’t feel rushed, even though the recommended arrival time was 9pm. I’m glad we made that decision, as it gave us plenty of time to get pre-race pictures and to sign the race wall; plus by about 8:30 the parking lot was a mad house and everyone was rushing to get to where they needed to be while we sat comfortably in our corral waiting for the race to start. If we had stayed in a host resort (which for this race were Pop Century, Caribbean Beach, and AKL) we probably would have arrived a little later than we did, but traffic for runDisney events is notoriously bad, so we decided it was better to be safe than sorry. 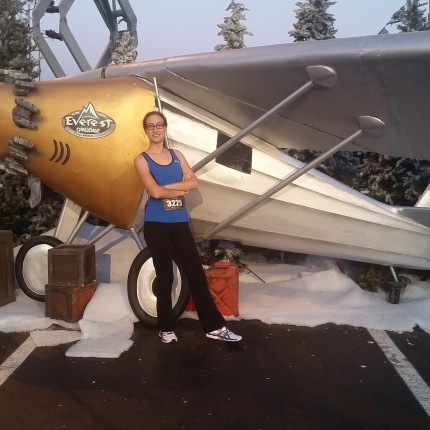 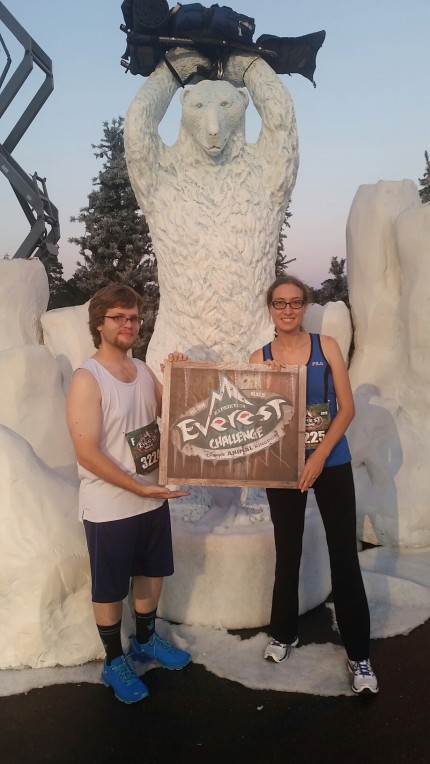 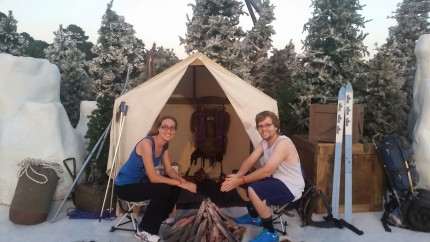 The 5k Obstacle Course
The start of a Disney race is always a treat. Usually there are fireworks to set off every corral (which happens every 10 minutes), but for Everest there was smoke instead. 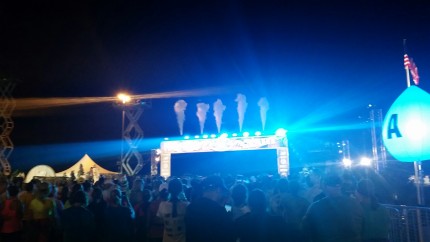 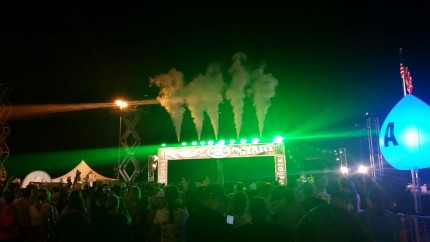 It was pretty cool and fit with the theme, but I was a little disappointed that it wasn’t the fireworks I was expecting.
Then at long last, almost a hour after the first corral set off it was my corral’s time to start. And before I knew it we were off.
The most unique thing about Everest is that it is not just a normal 5k. It is a 5k obstacle course with a scavenger hunt.
The first obstacle was about a half a mile in: Hay Bail Hurdles. They were only 1 bail high, so they were pretty easy to get over, however for those with limited mobility there was the option to go around all the obstacles. The first mile marker was just after we entered the park and just past that was a character stop where runners could get their pictures with Chip and Dale.
Once we got through the entrance we were greeted with a rare but absolutely gorgeous view: The Tree of Life after dark. 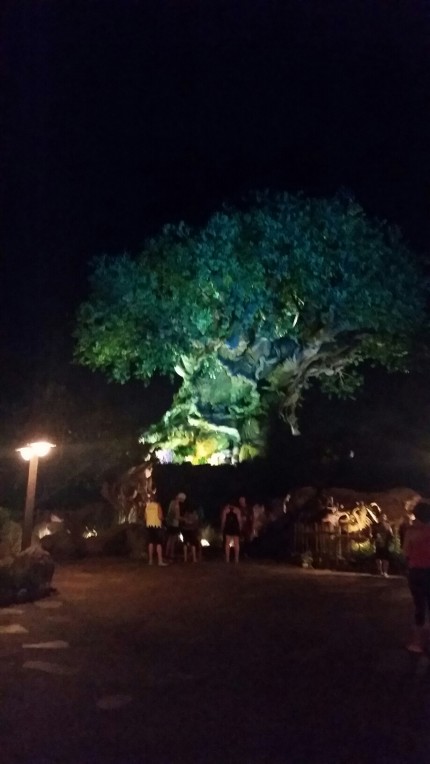 It was absolutely beautiful, but we didn’t have much time to appreciate the view, as we then turned to head towards Harambe Villiage. There we could see one of the stations for the scavenger hunt clues but we were directed to go a different way. We turned and headed towards Anandapur, along the way we passed two more character stops (Timon and King Louie), but I was just in my groove and didn’t want to stop for either of them.
We ran past Expedition Everest and headed backstage.
Just past the mile marker for mile 2 was our second obstacle: army crawling under a net. Then just before mile marker 3 was our final obstacle: a tire run. From there we crossed the 5k finish line.
But we were far from done.

The Scavenger Hunt
Instead of our medals, Powerade and a banana; we were given water, a cool cloth, and our first scavenger hunt clue with a mini sharpie and a key chain flashlight. 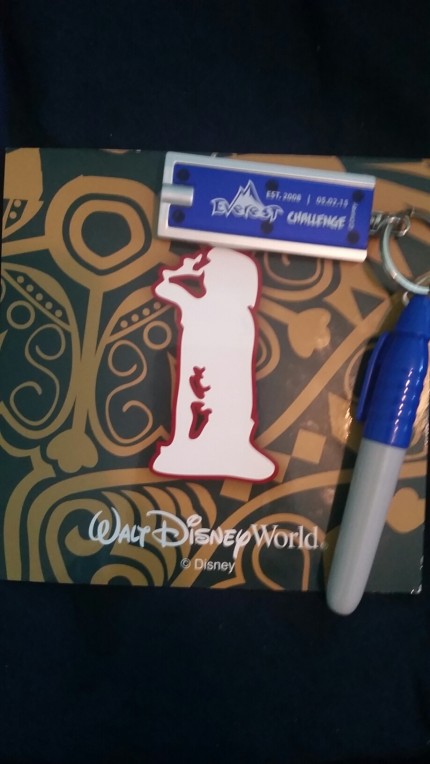 This first clue proved the hardest…but that was because there was a rather large error on the clue. It should have said digital instead of analog. Once one of the clue givers explained that, then it was easier. We gave the answer of “34” and received our next clue.

This clue was pretty easy, but it required knowing that Everest has been run for 7 years, not including this year. Once we got “Carabiner” as the answer we headed to Harambe for clue 3.

This one we got almost instantly. The next clue was also in Harambe so we very quickly gave “Mountaineers” as our answer and received our 4th clue.

I’m ashamed to say that this one stumped us a bit, thankfully we had some friends who were following along with our adventure on facebook who helped us get the answer “Elevation.”
From there it was on to our final clue, which was located in Asia. 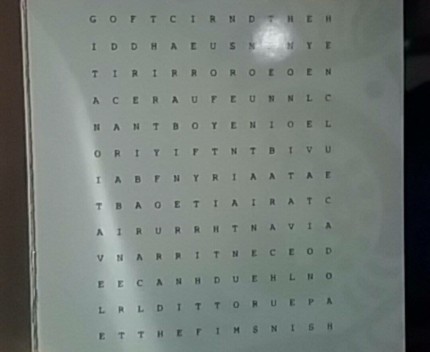 It was time consuming but fairly easy to solve. We had to find the words that were the answers to the previous clues. Once we crossed out those out we were left with “Go find the hidden yeti on a clue card and hold it up at the finish.”
So I turned over all the clue cards, and sure enough there was the Yeti. 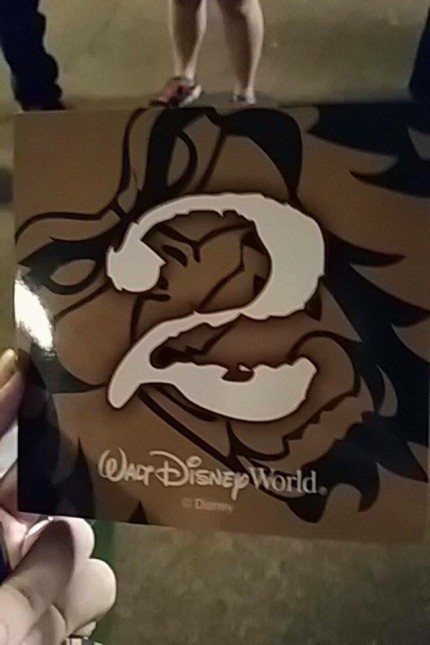 We ran to the finish, held up the card, completed the race. We got our medals, and our bananas and Powerade. The Everest Challenge medals are every bit as unique as the race itself. It may look like a normal, and maybe even boring, race medal. 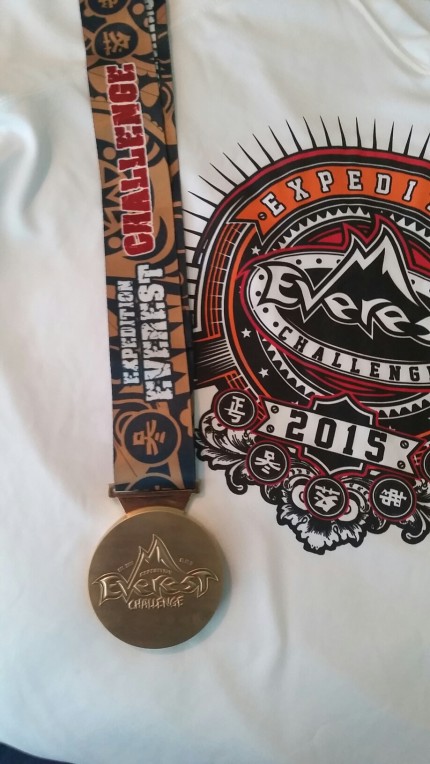 Until you open it to reveal the compass inside. 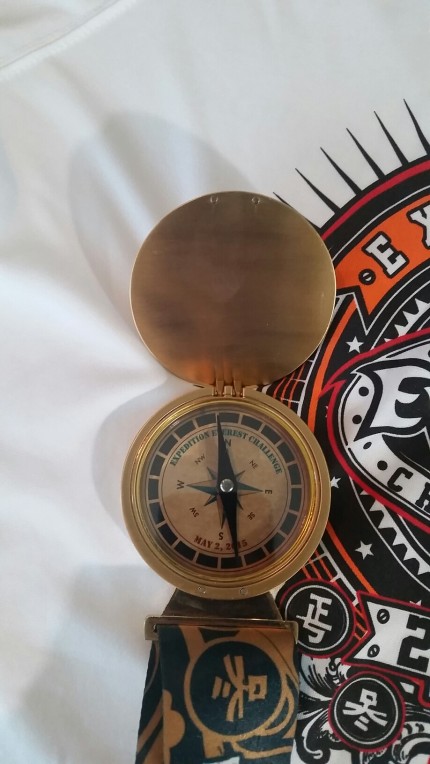 Once we got our medals we picked up our gEAR check bags and changed our of our running clothes. Then we headed to the after party.

The After Party
Dinoland USA and Expedition Everest were open for the runners (tickets were included in the cost of registration) and their guests (who could purchase tickets for the party through the runDisney website) until 2:30 am. At 1 am they had the awards ceremony for the fastest runners in various categories. There was plenty to stay busy with after the race, there was food for purchase, characters to meet, and of course rides to ride. Everest is even more fun to ride after dark as it is during the day.
All told, it was a very fun event and I would highly recommend it, especially to those beginner runners who want to experience a runDisney event but are not quite ready to commit to the longer distances of a 10k or Half Marathon.
Sadly, this was the last time the Expedition Everest Challenge will be held. It was a great race, but I’m sure runDisney has something fantastic in store to replace it.

TMSM is very excited to publish the “Racing Disney” series of  runDisney articles by Addie Clark and Tali McPike. To see the rest of the series please visit www.themainstreetmouse.com/tag/racing-disney/

Scott has 3550 posts and counting. See all posts by Scott 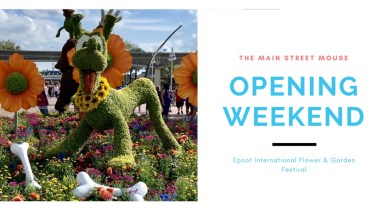 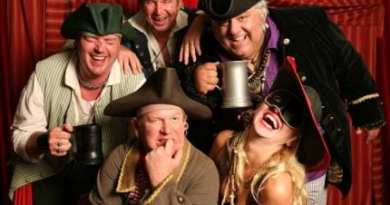 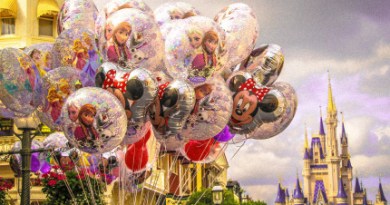 Missing the Magic! Can You Relate?

The Egg-stravaganza Is Returning to Epcot This Spring!

February 14, 2017April 9, 2020 Michele 0
The Main Street Mouse
%d bloggers like this:
We use cookies to ensure that we give you the best experience on our website. If you continue to use this site we will assume that you are happy with it.AcceptPrivacy Policy