I saw this blog by Albin Johnson, and wanted to share. I’ve heard of the 501st Legion, they are an amazing group that does a lot for charity. I had no idea they had a version for the little Star Wars fans.

Ask yourself a question. Why do kids like Star Wars so much? One theory is that it’s filled with so many characters that are larger than life: cool bounty hunters, powerful Sith Lords, noble Jedi warriors. Kids are built to imagine growing up to be something bigger than they are. Back in the ’70s and ’80s, a lot of us were kids and you better believe we got it. And dressing up in Star Wars costumes? We did it old school — moms made our outfits and we wore them proudly!

It occurred to me after 15 years of building a Star Wars costuming fan club that something was missing. We didn’t allow kids as members. Oh, don’t get me wrong, the 501st Legion, Rebel Legion, Mando Mercs, and the other clubs love kids. We all do this for the kids. Nothing thrills us more than to visit a hospital and to see the smiles on children’s faces when we troop. But having kids as part of our group? It wasn’t practical. But it wasn’t impossible.

So by 2008 the 501st was a well-oiled machine and I started posing the question: was it time to finally have a separate costuming group for kids? Their very own cool group to join? I mean why not? The costuming community had evolved to the point where logistics of events and organizing were well in hand. So why not a costuming group with kids as actual card-carrying members?

The response was loud and overwhelmingly skeptical. What about legal issues? Not enough interest. It would endanger the costuming groups that had achieved so much success. In short, it was just too risky. The funny thing was, I’d heard a lot of that same kind of talk about the 501st when I was trying to get it started. Nothing seems like a good idea until you start proving it works, I guess. You just have to give it a go. So we did.

In early 2010 I contacted a handful of veteran costumers and said, “Let’s just do it.” Adrian Basely from the UK was the first on board. A veteran of the 501st, he carved out a test web site, built a database, and brainstormed with me on how to make it all work. James Trainham, Rick Chinn from Australia, and William Tatsch (all veterans of the adult clubs) joined the group and got things rolling. The fruit of our early talks came down to three key objectives: keep it fun, keep it simple, and keep it safe.

Let’s talk about fun. Kids want to feel like they’re part of the story of Star Wars, so where would they fit best in that universe? We were drawn to a recurring theme in Star Wars: the young hero on a journey, growing in skill and wisdom. You had the Jedi Temple, the Kamino training centers, and Luke’s desire to attend the Academy. So a club for kids and young adults could be themed like a training facility for future heroes. What kid could turn that down? So the concept of the Galactic Academy was born.

Next came the part about keeping it simple. Kids would want to see themselves in costume on a web site. That was easy. We rounded up a handful of kids whose parents agreed to be pioneers. Pictures went up on Adrian’s borrowed web space. Any costume got approved, no matter what it looked like. This was about giving kids a place where they felt they belonged, where they could feel pride. So if a picture and a cadet ID number gave them a sense of belonging, then we’d provide it. No one would make them feel bad about costuming standards. It was all about fun (see objective number one above).

Finally, kids need to be safe. The solution was fairly straightforward: parents would be the ones submitting the cadet’s application, no information was required about the child’s identity at all, and contact information was limited to just the parent. Parents even had the option to use a fake name for their child on the website. And if they wanted a mask on in the picture then that was just fine.

So the Galactic Academy was born. But we were still missing something. The Academy needed a sense of identity. One thing I learned while developing the 501st was the attraction of belonging to something storied. Fans loved being part of a unit, “Vader’s Fist!” What would kids want to identify with? And we were talking kids anywhere from newborns all the way up to 17-year-olds. One size did not fit all. Adrian and I agreed — we’d have to have different age groups. And if we did, we’d need visuals to reflect that. We’d need logos the kids could rally to, symbols they could identify with.

To the rescue came good friend and longtime 501st member Giancarlo Bockos from the Italica Garrison in Italy. Giancarlo was a master artist and loved drawing cartoons. I saw him after a trooping event and explained our needs. Overnight he delivered amazing artwork to fit the bill: seven logos, one for the club as a whole and two (one Imperial and one Republic) for each of three age groups. Now kids could feel a connection with their age group and with what side of the Force they were working with. Now we had banners for the kids to fly!

The web site went up and the word went out. Applications came pouring in. Parents reported that their kids were thrilled to finally have their own cadet ID numbers and their own units. Smiling faces posed in their costumes and it was heart-warming to see the enthusiasm. The group was small but it was a beautiful thing and a perfect model of what Star Wars fandom should be. Pure joy.

Just a few months after launching, Celebration V took place in Orlando, Florida. I put the word out for all cadets in attendance to meet up for a group photo. The group that formed was nothing less than inspiring. They gathered around the first ever Galactic Academy banner and traced their hand prints and signed it. It was a stirring moment. In just a few months’ time we had a sizeable group of kids, all of whom were thrilled to stand as a group of their own! 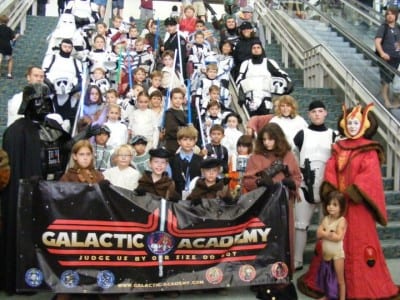 Today the Galactic Academy is topping 800 members strong with cadets in 30 countries and EVERY state in the US. To better organize, we have commissioned units we call Galactic Academy campuses, and so far nine have formed in the following nations: North America and Puerto Rico, Canada, England and Scotland, Ireland, Russia, Hungary, Chile, Australia, and New Zealand. More campuses are in development in Germany, France, Mexico, and Spain. And our over-worked membership volunteers Todd Maxfield-Matsumoto and Kristy Anderson have been processing on average two applications every day (more after convention appearances!). 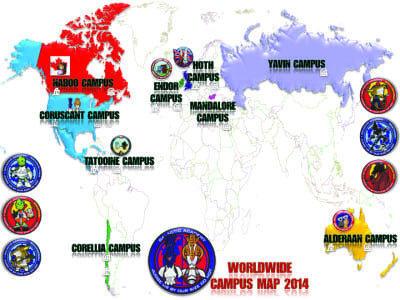 The costuming hasn’t been vanilla, either. We have 73 unique costume types in the database (51 Imperial and 22 Rebel), with 163 Jawas, 140 Jedis, 72 Stormtroopers, 65 Darth Vaders, 2 Princes Leias, and on down the list. Parents are jumping in with all kinds of costuming techniques to help kids become part of the Star Wars universe with inexpensive and creative designs which are being collected into a guide for other families to use.

What’s happening is a revolution on repeat: the wave of discovery and joy we had with the 501st Legion in 1997 is happening all over again for kids. At last they have a role in the fan community. Toy drives, hospital visits, fund-raisers, parades: the kids are doing it themselves! And they’re proud of it.

So if you have kids who watch the 501st, Rebel Legion, or Mando Mercs hard at work, and they turn to you and say “I wanna join that club!” just remember: they don’t have to wait. Star Wars is for kids, young and old, and the future looks bright for our next generation of Sith Lords and Jedi. Hop on over to www.galactic-academy.com and see what’s going on! Or email them HERE— it’s free, it’s fun, and your kids will love you for it.

To paraphrase Yoda: Judge them by their size, do not!

Scott has 3467 posts and counting. See all posts by Scott

Do You Want to Draw a Snowman?