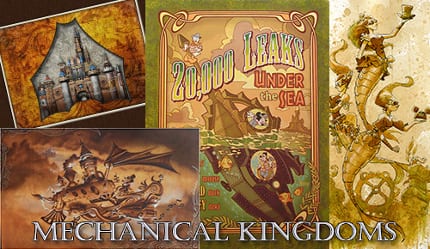 is proud to present

Steam-Driven Visions of a Victorian Future

Steampunk, a subgenre of science fiction loosely built around retro-futuristic visions of a steam-powered society, has been gaining (pardon the pun) steam over the past several years. The movement, which is expressed culturally and stylistically in everything from technology and design to music and fashion, was dubbed steampunk in the late 1980s. Though certainly not part of the steampunk “wave” (at least not consciously), Walt Disney Imagineers have been creating their own visions and versions of retro-futuristic technologies since well before that time, incorporating them into Disney parks and attractions around the world. 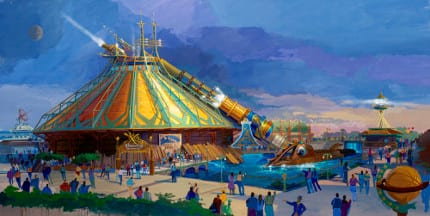 Mechanical Kingdoms, featuring conceptual designs and ideas for an array of inventive vehicles, machines and gadgets, does share some of the same inspirations as steampunk, most prominently a fascination with the extravagantly inventive visions of tomorrow expressed by such Victorian futurists as Jules Verne and H.G. Wells.  So don your petticoats and bustles or your suits and old military storm coats, pull on your brass goggles, dangle your ray gun from your hip and get ready for an adventure that takes us forward into the past, as seen through the eyes of Disney artists and designers.

The Disney Gallery is located in The Disneyland Story presenting Great Moments with Mr. Lincoln in Town Square on Main Street, U.S.A. at Disneyland® park.

Make sure to mark your calendar for a special Steampunk artist signings, as we celebrate the release of artwork and collectibles inspired by turn of the century inventors and writers, as well as artwork inspired by Disney attractions, icons and innovations that have been cultivated from this view of the future from the past. Artist Signings will take place February 22 at the Disneyland® and Walt Disney World® Resort. Prices, sizes and formats will vary. See detailed information and product images below.

Keep a Weather Eye Open Matey! Be the first to check out this Steampunk inspired piece by Walt Disney Imagineer, Jim Crouch, featuring one of the most iconic scenes from the Pirates of the Caribbean attraction.

This Primeval World piece blends the world of Steampunk with some of Disney’s most magical moments as you travel through time in on the Disneyland Railroad.

Feature Animation artist Brian Kesinger has been enthralled with the Steampunk aesthetic ever since working as a layout artist on the animated features Atlantis and Treasure Planet. The timeless interpretations of Lost and Found, as well as A Journey Through Liquid Aether capture every rivet detail, infusing believability into fantastical environments.

Noah has expertly captured in Manning the Machine of a Million Dreams, the unique moment as Mickey Mouse travels through time on his steam-powered contraption, which seems to whistle a happy tune.

Walt Disney Imagineer, Mark Page likes to refer to his art as “Fantastical,” capturing the flavor of Steampunk with elements of ornate detail, fantasy, imagination, optimism and subtle symbolism with an underlying theme of man’s pursuit to imitate or be influenced by design found in nature.  You will find this in all four of his images including, Mickey’s Steam Powered Airship, McDuck’s Steam Powered Time Travel Sedan, Goofy’s Pedal Powered Airship and Donald’s Steam Powered Submarine.

Disney inspired artist Javier Soto has created a hand-finished sculpted relief fabrication of the Nautilus mounted on wood that is sure to delight any 20,000 Leagues Under the Sea and Steampunk collector.

Though these artists will not be making an appearance, the artwork will still be available for purchase.

Disney Design Group artists Costa Alavezos, Alex Maher and Michael Sullivan, among other artists combined efforts to create the quintessential poster representing “The Mechanical Kingdom.”  Also available will be attraction vehicle inspired sculptures with some of Disney’s most beloved characters at the helm.  Tip: Each sculpture includes a light-up feature.

Scott has 3538 posts and counting. See all posts by Scott 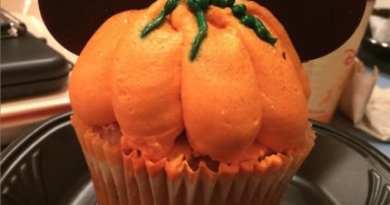 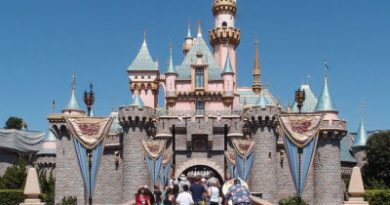 Ten Ways to Kick Up Your Heels at the Disneyland Resort 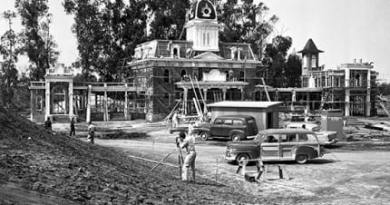 Building the Dream: The Making of Disneyland Park – City Hall

November 8, 2019April 11, 2020 Guest Blog 0
The Main Street Mouse
%d bloggers like this:
We use cookies to ensure that we give you the best experience on our website. If you continue to use this site we will assume that you are happy with it.AcceptPrivacy Policy