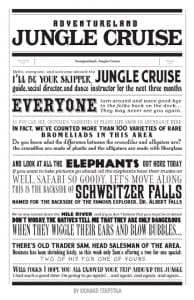 This is the second of my articles are about the E-Ticket rides. For those of us too young to remember, the E-Ticket was the most coveted ticket in the ticket book a guest would buy. E-Tickets were for the biggest and best rides in the park. In June 1982 the ‘ticket’ system was replaced with the current system.

E-Ticket: Cruisin’ Down the Rivers

Being a cool teenager Matt had no desire to listen to the comedic lines delivered since 1991; he was more interested in the background and already knew that before ‘91 the ride was more like a wildlife documentary. When the audio was added so was the queue decorations and Albert Awol’s office, Matt had done his homework. The cruise opened on Oct. 1 with the rest of the Magic Kingdom, and drives a whopping 2.18mph. And that wasn’t all he knew.

Matt knew that the front of the airplane tail you see is actually 4.4 miles away on the Great Movie Ride at Disney’s Hollywood Studios. The original attraction is very different than what we see today. It was supposed to be full of real animals; even after it was switched the ride was supposed to have frogs and you can still hear them but they were removed early on. The waterfall you pass under is just a huge filter for the 1.75 million gallons that flows throughout the attraction.

Matt knew even more about the boats themed after the 1930s boats you see in the movie The African Queen; there are 15 total but only 10 run at a time, holding about 32 people each. All the names are alliterations accept one, Orinoco Ida. He knew only one boat was ever retired, the Kwango Kate in 2000, and only one boat ever sank, Sankuro Sadie in 2004. All the boats run on a track with a wheel attached to the bottom of the boat, so when Sadie started taking on water there was only about 3’ of dyed, water under them. An open drain plug was to blame.

Now on to a little humor: “How many of you are on the Jungle Cruise for the first time? Good! So am I.”

Next: The Wildest Show with Jane, the brother’s mom. 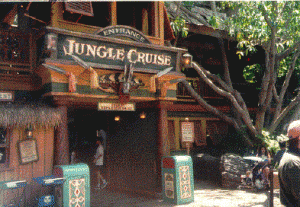 May 6, 2019April 9, 2020 Scott 0
The Main Street Mouse
%d bloggers like this:
We use cookies to ensure that we give you the best experience on our website. If you continue to use this site we will assume that you are happy with it.AcceptPrivacy Policy