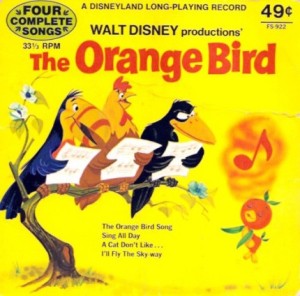 How many of you remember those lyrics by the infamous song writing duo, The Sherman Brothers and sung by the former Miss America contestant Anita Bryant? How many of you remember the Florida Orange Bird? A big bird with an orange for a head, leaves for arms and a green stem sprouting from his head. Some of you are saying “yes I remember The Orange Bird”, some may not remember him and others may think I have lost my mind and do not have a clue what I am talking about. But from opening day of the Magic Kingdom in 1971 until 1983 when he flew the coup, there was a walk around character called The Florida Orange Bird. So sit back, relax and grab yourself a Citrus Swirl from Sunshine Tree Terrace and enjoy this month’s article on the gone but not forgotten Florida Orange Bird.

In 1967 Walt Disney Productions and the Florida Citrus Commission (known as The Florida Citrus Growers within the park) entered into negotiations for a Florida Citrus Commission sponsored attraction. On October 22, 1969 the deed was signed. The FCC would sponsor the 3 million dollar pavilion in Adventureland that included The Tropical Serenade ( a duplicate of Disneyland’s Enchanted Tiki Room), The Sunshine Tree Terrace snack bar and the rest of The Sunshine Pavilion. The following year WED Enterprises created The Florida Orange Bird to serve as the FCC’s official mascot and “the friendly face of Florida sunshine and fresh squeezed orange juice.” This was sort of an unusual move by Disney since most people that visited WDW were coming to see Mickey Mouse and not some bird with an orange for a head that was completely unknown. This was not Disney’s first time using a character that was unassociated with Disney. When Disneyland opened in 1955 there was a walk around for the syrup connoisseur Aunt Jemimah which could be found in front of her restaurant.

The Florida Orange Bird was designed by C Robert Moore who worked on many other Disney projects including the Walt Disney stamp. The Orange Bird would be featured heavily in television ads, print media, and souvenirs. Guest would see billboards on the way to Magic Kingdom, advertising The Orange Bird and once in the park could see him at The Sunshine Tree Terrace. Located between The Enchanted Tiki Room and the walkway to Adventureland, the Sunshine Pavilion housed the Sunshine Tree Terrace. After guests exited the Tropical Serenade,they could stop off here to grab a Citrus Swirl, the predecessor of the Dole Whip. A three dimensional Orange Bird located on the porch had a small screen that projected his happy orange thoughts.

The FCC signed Anita Bryant in 1968 to serve as the official spokesperson. In 1971 with the opening of Magic Kingdom she joined The Orange Bird in publicity photos and commercials. One of the products that resulted in this paring was a full length 45 LP. The record included an illustrated 10 page storybook that told the back story of The Orange Bird. The story on the LP was narrated by Bryant who also sang all the songs on the record. Anita and The Orange Bird stayed together until 1977. The Florida Citrus Commission ended their relationship with the singer and former Miss America contestant after she became very visible and vocal against anti-discrimination legislation in Miami where she lived. She led a boycott of Florida citrus products and had a very vocal and public opposition against homosexuality. The little Orange Bird no longer had a public spokesperson to speak his thoughts and sing his praises.

In 1981 the FCC and Disney signed a new 5 year sponsorship agreement and maintained its formal connection to The Sunshine Tree Terrace and the Tropical Serenade. They later opened a new juice bar in the form of Fantasyland’s Enchanted Grove, replacing the Fantasyland Art Festival. By 1986 the bird had ceased to appear in commercials and was primarily just a licensed character sold on merchandise at souvenir shops and fruit stands throughout the state. The FCC and Disney parted ways that same year.

Well into the 1990’s the birds popularity was quickly fading. He was becoming less associated with the citrus industry and becoming more noticeable as a state of Florida character. His face was now being seen on Florida t-shirts and other merchandise throughout the state. But you can never hold a good orange bird back. In the early 2000″s the bird began to spark a re-interest. His song could be heard on-flight with Song Airlines and around 2004 Tokyo Disney began producing it’s own Orange Bird merchandise. Recently he has even popped back up in Walt Disney World with a new t-shirt and his own Vinylmation figure. It’s good to know that Disney hasn’t completely forgotten this (as far as I know) first non-Disney character and maybe one day (fingers crossed) might bring him back into the parks, but until then just “Think funny thoughts or sunny words”, and next time your at the Sunshine Tree Terrace grab one of those Citrus Swirls and think back to those days when the Florida Orange Bird would come out to greet you.

Are you an Orange Bird fan? 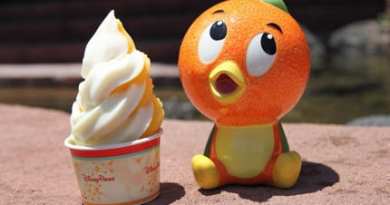 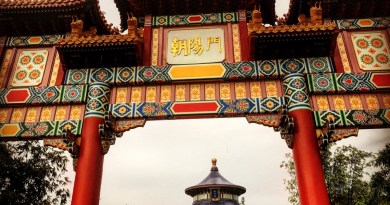 Tuesdays With Corey: The China Pavilion 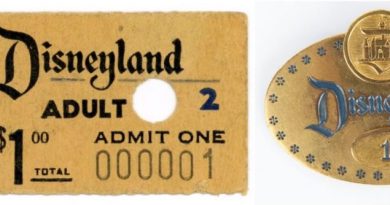 A Golden Celebration of Disney History

Celebrating Collaboration: An Inside Look at Some of the Brands that Help Create Magical Guest Experiences

April 9, 2021April 9, 2021 Guest Blog 0
The Main Street Mouse
%d bloggers like this:
We use cookies to ensure that we give you the best experience on our website. If you continue to use this site we will assume that you are happy with it.AcceptPrivacy Policy