One of Walt Disney World’s newest and most interesting shows, KiteTails, will officially be seeing some changes at Disney’s Animals Kingdom as the resort says it plans on “shifting the focus” of the show.

The show, which premiered late last year at the resort, is said to be “shifting the focus” of the show so that guests can experience it from anywhere around the Discovery River Lagoon, according to the resort. Per this change, the show will also be shortened and receive more performances throughout the day.

For those who may have never experienced the show, it premiered as part of Walt Disney World’s 50th anniversary celebration and features massive and sometimes hard to control kites themed after Disney characters. Some of the more recognizable characters featured in the show include Simba and Puma from Disney’s “The Lion King” and Baloo from “The Jungle Book.” 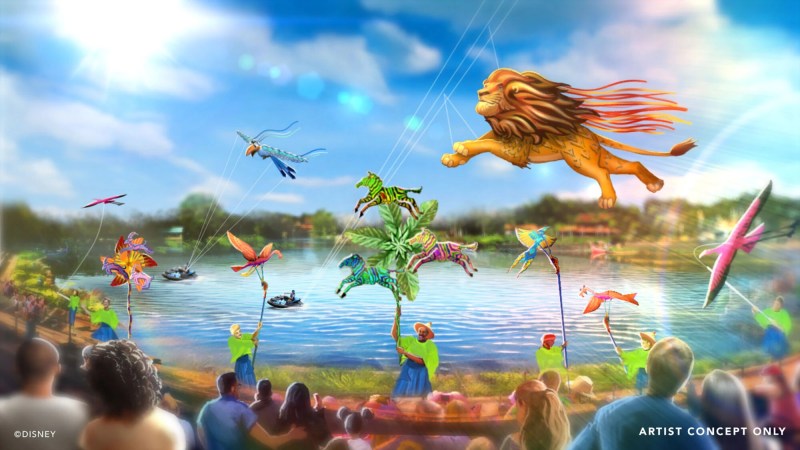 From the description of this change, it sounds as if this show will take a similar format to Mickey’s Celebration Cavalcade at Magic Kingdom. This came after the parks reopened following the COVID-19 pandemic when the resort was trying to refrain from large gatherings of crowds. In an effort to do this they canceled the Festival of Fantasy parade and instead held the cavalcade multiple times a day.

This featured the same floats from Disney’s Festival of Fantasy parade. However, it did not include the same amount of floats typically featured in the parade and they were more spread out and sporadic to lessen the likelihood of crowds forming.

At the premiere of KiteTails the show came under some scrutiny as several of the kites featured in the show were found to be hard to handle at times. Specifically, some kites would crash into the water or the nearby seating areas of the Discovery River Lagoon.

What are your thoughts on Disney World changing up the KiteTails show at Disney’s Animal Kingdom? Let us know in the comments!

June 4, 2020 Guest Blog 0
The Main Street Mouse
%d bloggers like this:
We use cookies to ensure that we give you the best experience on our website. If you continue to use this site we will assume that you are happy with it.AcceptPrivacy Policy