From the Disney Parks Blog and written by: Lisa Greathouse

A chill went down Graphic Designer Tim Wollweber’s spine when he realized two Roman numeral “X”s for the eyes of zombie gingerbread men would perfectly “skelebrate” 20 seasons of Haunted Mansion Holiday and its creepy centerpiece, the Gingerbread House in the mansion’s ballroom, debuted to guests September 3.

“It’s so fitting, isn’t it?” Tim chuckled. “I love to think about all the double X’s we’re placing everywhere. In fact, we’re calling the house ‘EXXhumed Delight,’ since we basically dug up references to the past 19 years of gingerbread houses to create this one.”

Dead-icated fans of the attraction, which pays tribute to “Tim Burton’s The Nightmare Before Christmas” every Halloween Time through holiday season, will no doubt devour the details in this year’s gingerbread house and its nods to past years. It’s easy to spot 2009’s Scary-Go-Round House, 2015’s Gingerbread Card House, 2014’s Gingerbread Zombie House and Tim’s personal favorite, the Giant Man-eating Wreath House from 2005, but other creepy contributions are more, uh, subtle.

“Looking at it from the point of view of Jack [Skellington], it felt like we should go down to our gingerbread graveyard and dig up all the pieces we love,” Tim said. “And we wound up putting together this really fun, bright, obnoxious memorial to 20 years.”

After designing the house on paper and then creating a computer 3D model, Tim’s partners in Fabrication created the understructure, while the Entertainment Technical Services team worked on animated elements, like the independently moving (and treacherous) arms of the man-eating wreath and snake that keeps trying (and failing) to eat the gingerbread zombie.

“We use a combination of air pistons and rotary actuators that are controlled by electrically triggered valves,” said Stage Technician Richard Miller. “It’s complicated — and magical!”

The Central Bakery team spent hundreds of hours baking and decorating the nearly 13-foot house (the biggest ever!) in five main pieces, which were then carefully moved into the mansion, where they were assembled on the ballroom’s dining table. Then, the team placed shingles and other finishing touches, “like snow and maybe a couple of hidden Mickeys,” said Pastry Sous Chef Gracie Gomez.

This year, the bakery used more than 200 pounds each of gingerbread dough and powdered sugar, about 50 pounds of egg whites and more than a pound of glitter to make the mini mansion spellbindingly sparkly. “Every year the team works tirelessly to create this masterpiece, and we have people who’ve worked on it every year,” Gracie said. “My favorite part is getting on the attraction and seeing the house as a guest because we can see all the work that these cast members put in, in its finished glory.”

And in case anyone doesn’t realize that Haunted Mansion Holiday is marking 20 years, Tim designed a reminder in the pumpkin patch in front of the mansion. “It’s a remembrance wreath on an easel, like the ones people would use to memorialize the dead,” Tim said. In the middle is a tombstone-like representation of Jack’s face with a nod to his 20 years at the mansion. “It’s both funereal and Christmas-y, which is exactly what Jack would want.”

The rendering and list below provide a ghoulish glimpse of which house from the past is represented in each element of of this year’s creation. 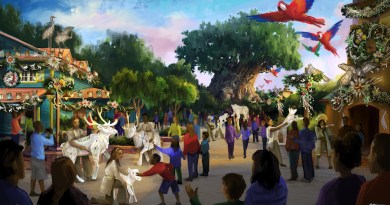 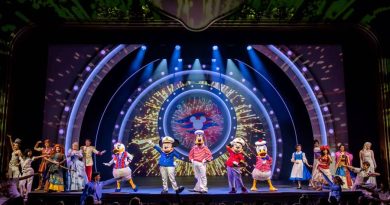 May 22, 2018April 16, 2020 Guest Blog
The Main Street Mouse
%d bloggers like this:
We use cookies to ensure that we give you the best experience on our website. If you continue to use this site we will assume that you are happy with it.AcceptPrivacy Policy