There have been a lot of rumors floating around about the future of the Country Bear Jamboree lately.  As most know, we don’t ever post rumors and haven’t since The Main Street Mouse started almost 10 years ago.  Now that Disney has confirmed this classic attraction isn’t going anywhere, I thought this may be a good time to do a little history lesson about this family favorite at Disney’s Magic Kingdom!

For many, the Country Bear Jamboree has been a staple to their Disney vacations as it was an opening day attraction on October 1, 1971, at Walt Disney World.   For those who have never seen the show, it consists of audio-animatronic bears that sing and entertain the crowd.  There are even animal mounts on the walls that interact with the bears on stage. 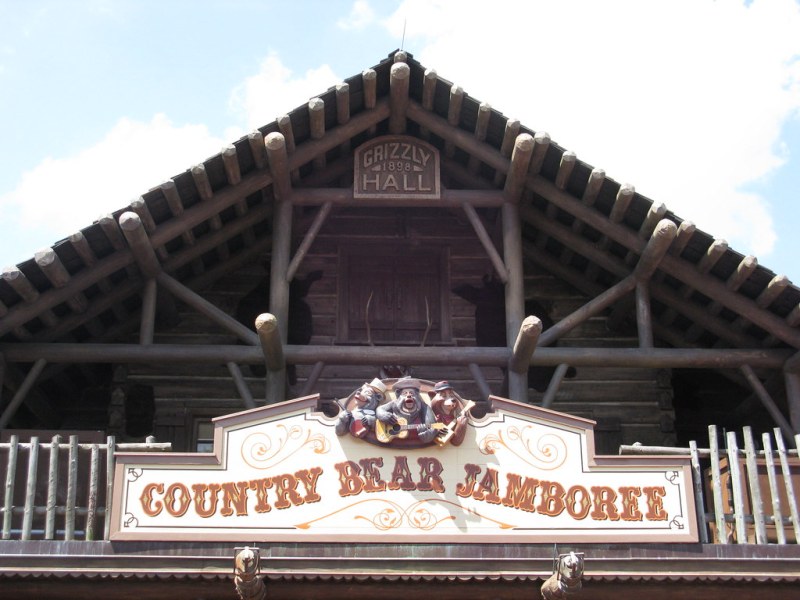 The attraction was not meant to be in one of the Disney parks, but rather Disney’s Mineral King Ski Resort in California.  Walt wanted some type of entertainment at the resort and he wanted it themed around bears and he assigned one of his nine old men, Marc Davis to create this show. In 1966, it’s said Marc Davis was working on the different characters when Walt walked in to see the progress. Walt loved the characters Marc had come up with and laughed about them.  While leaving the office, Walt turned back to say goodbye to Marc.  Most wouldn’t think much about this, but Walt was known for not saying goodbye.  This would be the last time they would see one another as Walt passed away shortly thereafter.

After Walt’s passing, like many things, the project still moved forward.  The bears were to be featured in the resorts “Bear Band Restaurant Show” and would have a country twang about it.  Although the plans for the bears moved forward, the resort plans didn’t. It was decided the bears would become one of the opening day attractions for Walt Disney World.  Xavier Atencio and George Burns would team up to create the songs the bears would entertain the crowd with.

The attraction was such a huge success that it was decided there would be a Disneyland version opened that would house more guests.  Actually, there were 2 identical theaters with the exact same shows to be able to get more guests to see it.  That version opened on March 4, 1972.  In addition, in 1983 the show made it’s international debut when it opened at Tokyo Disneyland with the same 2 theater setup as in Disneyland.

There have also been some special shows that have come and gone over the years.  In 1984, at Disneyland and the Magic Kingdom, the Country Bear Christmas Special debuted.  In 1986, the Vacation Hoedown debuted at both US Parks.  Sadly on September 9, 2001, the Disneyland version of the attraction closed to make room for another bear, The Many Adventures of Winnie the Pooh.  The Vacation Hoedown ended it’s run at the Magic Kingdom in 2005.  The Tokyo Disneyland attraction still runs all three versions at various times throughout the year. The Country Bear Christmas Special was the first Disney attraction to become interchangeable during the year.

While everyone has their favorite bear, I’m a Big Al fan. Lets meet them all: 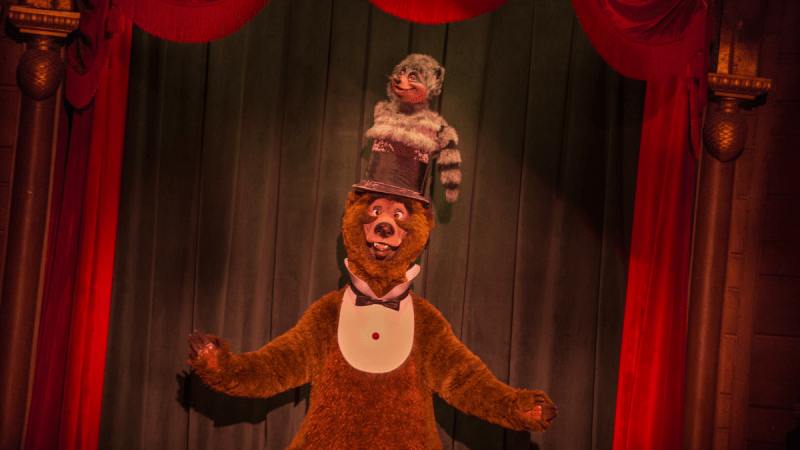 Henry – The Master of Ceremonies

Wendell – The mandolin playing bear with the overbite and buck teeth

Trixie – Female bear with a blue bow on her head, blue tutu and holds a blue handkerchief.

The Sun Bonnet Trio (Bunny, Bubbles, and Beulah) – triplets who all wear matching blue bonnets and dresses. Bunny is center, Bubbles is on the audience’s left side and Beulah on the audience right side.

Gomer – the piano playing bear with a blonde goatee and hat

The Five Bear Rugs (Zeke, Zeb, Ted, Fred, and Tennessee) – Zeke is the leader and plays the banjo, Zeb plays the fiddle and wears a derby hat and a bandana, Ted is the tall bear playing the washboard and blows on the cornjug, Fred is the largest of the five but plays the smallest instrument in the mouth harp and Tennessee plays the upright bass with only 1 string and a bird sitting on it.

Baby Oscar – While not playing any instrument or saying a word, he appears with the Five Bear Rugs and has a teddy bear to keep him company.  He’s the son of Zeb.

Big Al – The pooh sized bear and favorite to many, he plays the out of tune guitar with his tan hat on and red vest.

Other characters of the show that aren’t bears include:

Buff – is mounted on the wall and is the American Bison.  He is actually voiced by Disney Legend Thurl Ravenscroft

Max – is mounted on the wall and is the whitetail buck

Sammy – is the raccoon pal of the Master of Ceremonies Henry and sits on his top hat. In the vacation hoedown version, he is replaced by a skunk named Randy. 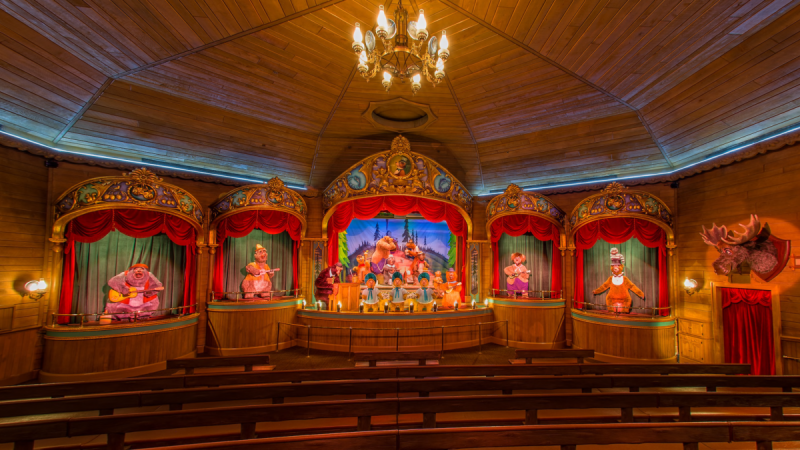 In August 2012, the Magic Kingdom version was closed for a refurb where all the show stars received new skin, fur, and costumes.  Also, some songs were removed and others shortened to decrease the length of the show.  The show reopened in October to the new shortened show that is still entertaining guests today.

Some of the technical things about this show, there are 18 audio-animatronics that come to life across 5 stages.  Four of the stages are on turntables so that bears appear to move during the presentation. Some of the bears rise from the floor and 1 comes down from the ceiling.

Center stage has several backgrounds which descend on rails to provide a backdrop to the animatronics performing on the main stage. These backgrounds change when the main stage curtains are closed. The Five Bear Rugs are visible when there is no backdrop and it is their turn to perform. They are on a rolling platform that rolls forward during their part of the show. The rolling platform remains in Tokyo’s version and changes seasonally from the Bandstand used in the Original show to the log used in the Vacation & Christmas show (the latter covering the top of the log in cotton to represent snow). Additional figures rise up from the stage floor and from the ceiling on hydraulic platforms when necessary.

Well, I hoped you enjoyed this little history lesson about the Country Bear Jamboree. If you haven’t ever taken the time to watch the show, I recommend you do that the next time you have the chance.  If nothing else to have a chuckle and get out of the sun for a bit. Enjoy! 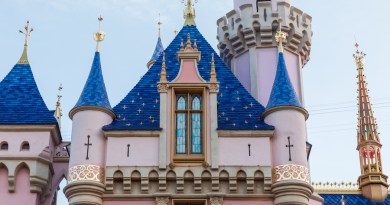 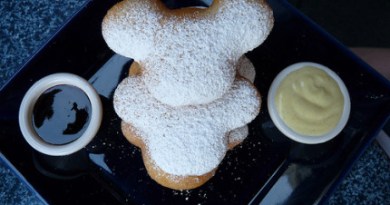 Learn More About the Heroes of Guardians of the Galaxy – Mission: BREAKOUT! Coming to Disney California Adventure Park May 27

May 5, 2017April 16, 2020 Scott 0
The Main Street Mouse
%d bloggers like this:
We use cookies to ensure that we give you the best experience on our website. If you continue to use this site we will assume that you are happy with it.AcceptPrivacy Policy