Many of you who have followed us for sometime now, may remember that in 2017 when we covered the D23 Expo in Anaheim, California we stayed at the Anaheim Majestic Garden Hotel located just behind Disneyland.  We are back in Anaheim this week covering the media preview of Star Wars: Galaxy’s Edge and the Anaheim Majestic Garden Hotel is sponsoring this trip for TMSM.  We honestly really enjoyed staying with them in 2017 which is why when we needed to return to Anaheim we reached out to them again and we were updated that the hotel is celebrating it’s 50th Anniversary this year. 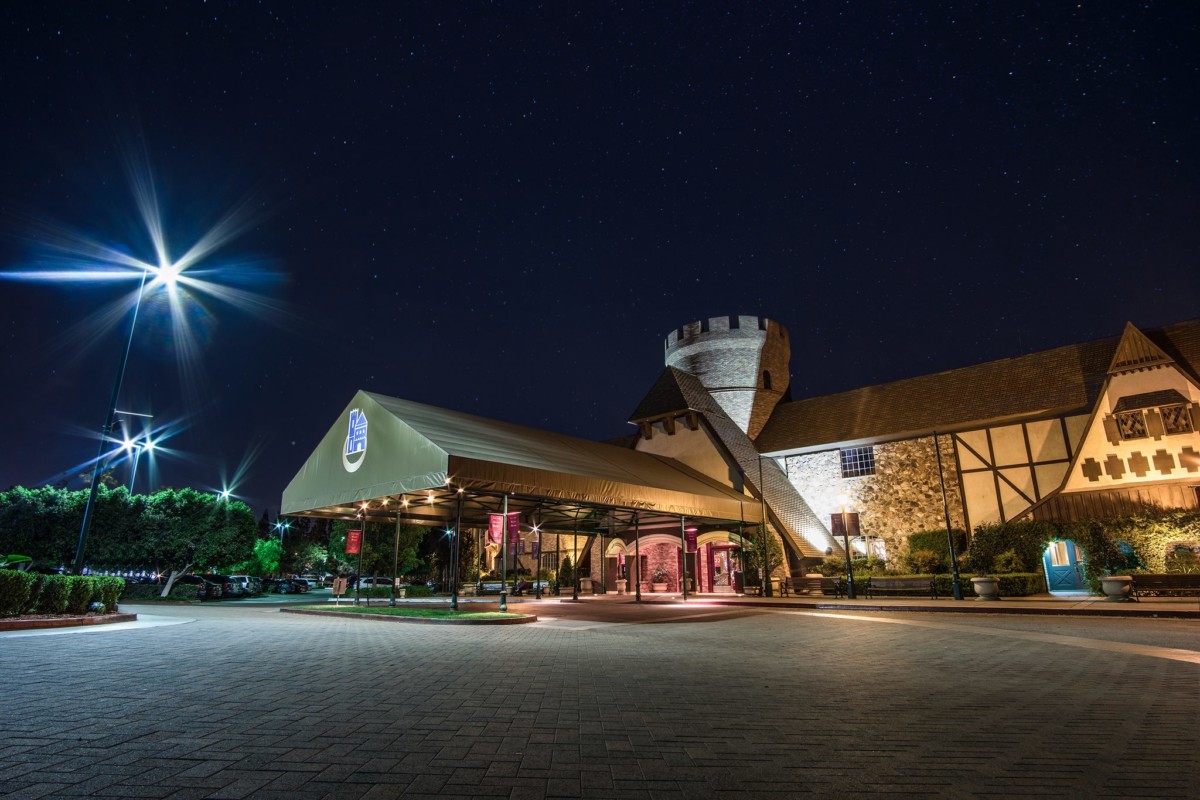 The hotel opened in 1969 as the Royal Coach Inn the same year as the Haunted Mansion and its 999 ghosts took residence at Disneyland. The hotel was quickly taken over by Dunfey’s Hotels and Motor Inns, a family owned company that would go on to become Omni Hotels. The distinctive Tutor and castle architecture of Anaheim Majestic Garden Hotel was originally one of five Royal Coach Inns, with locations in Anaheim and San Mateo, Calif., Beaumont and Dallas, Texas, and Atlanta, Georgia. Anaheim Majestic Garden Hotel is the only Royal Coach Inn still in existence today.

“WHEN TOP QUALITY is blended with solid comfort and warm nostalgia, the result can be delightful. The Royal Coach features Tudor-charm and British traditions for superlative innkeeping blended with time- tested Dunfey hospitality. Our British and Scottish antiques are authentic. Our service and cuisine very well spoken of. Come and have a look. We’ll take good care of you.”

In 1972 after a name change to the Sheraton Anaheim, the hotel was witness to ice hockey history as the World Hockey Association, WHA held their inaugural draft over two days in the hotel in mid- February. Twelve teams selected upward of a thousand players in the formation of the first major league to compete with the NHL. The league only lasted about eight years but created teams like the Edmonton Oilers and helped launch hockey greats like Wayne Gretsky. 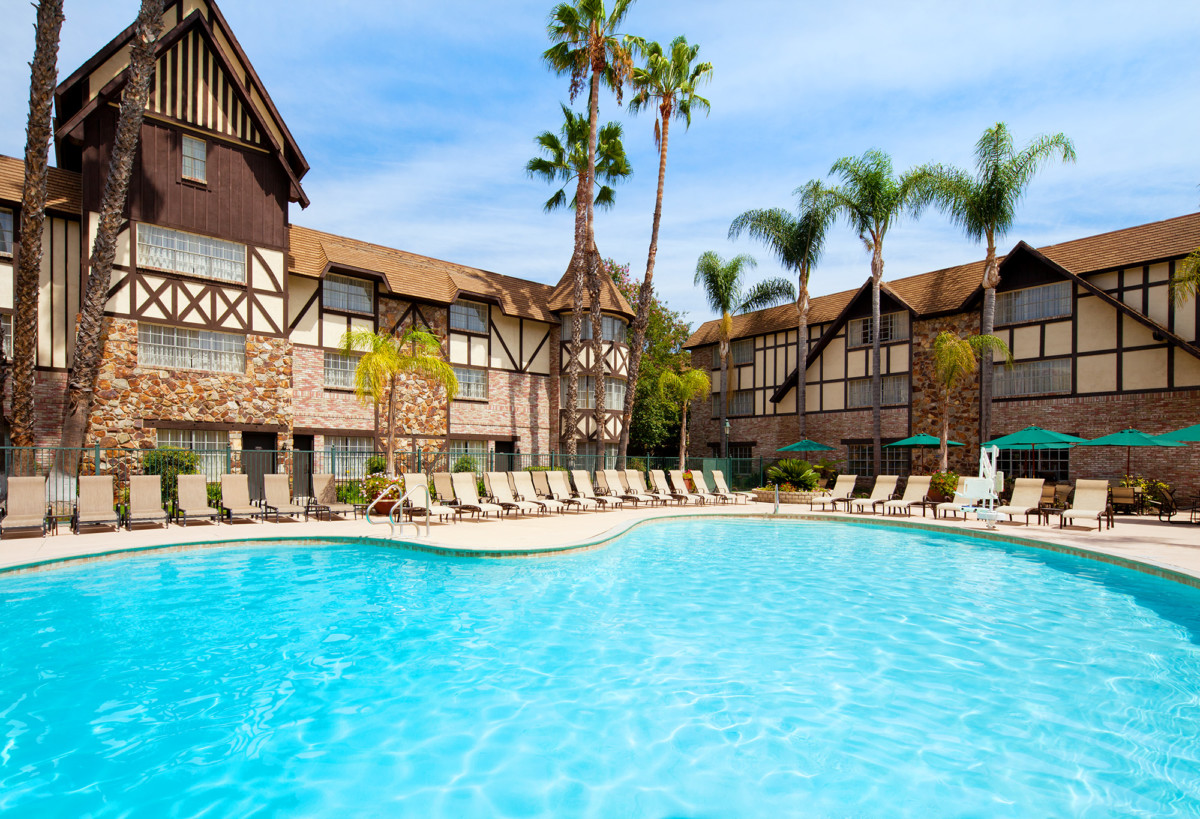 Fun fact: While hockey history was being made next door, Disneyland premiered “The Main Street Electrical Parade.” The parade re-created scenes from classic Disney films through music and use of more than a half-million twinkling lights.

The 1970s gave birth to Amtrak, which created a resurgence in domestic rail travel interest. It was also the era of airline deregulation, which forever changed how airlines and subsequently hotels would market to potential clients. Americans continued their love affair with television and were further inspired to travel with the roll out of the most-tourism-positive television series ever, the Love Boat.

The consumption of mass media carried over to hotels and again the Anaheim Majestic made history. In 1973, the Sheraton Anaheim became the first hotel to offer in-room movies.

A place of refuge: In April 1982 the hotel opened its doors to Anaheim residents fleeing the devastating “Ball-Euclid” fire. The blaze started early in the morning during an extreme Santa Ana wind period and consumed over 50 buildings and 500 apartment units. A total of 118 fire companies from departments throughout Orange and Los Angeles counties engaged the wind-driven conflagration, which was only extinguished after a late-afternoon break in the winds. This fire would prompt legislation banning non-fire-retardant roofs in Anaheim and in many other cities.

A New Banner for a New Era

Hotel. On May 23, 2015, Guests were invited to participate in the royal ceremony that included the court of the Medieval Times and a full heralded presentation.

“As we embark on this new story for us here at the Majestic Garden we are also embracing an ancient one. You can discover the castle’s history on the second floor. There you will learn about the heroic acts of a princess, who became a knight, and how she saved a mighty dragon who became her friend,” said General Manager Lee Robinson during the ceremony. “The Majestic will also be a place for your own stories to flourish. Cherished family stories of time spent together. One thing that will remain the same is our staff and their dedication to providing our guests with a truly “Royal” experience each time you stay with us.” 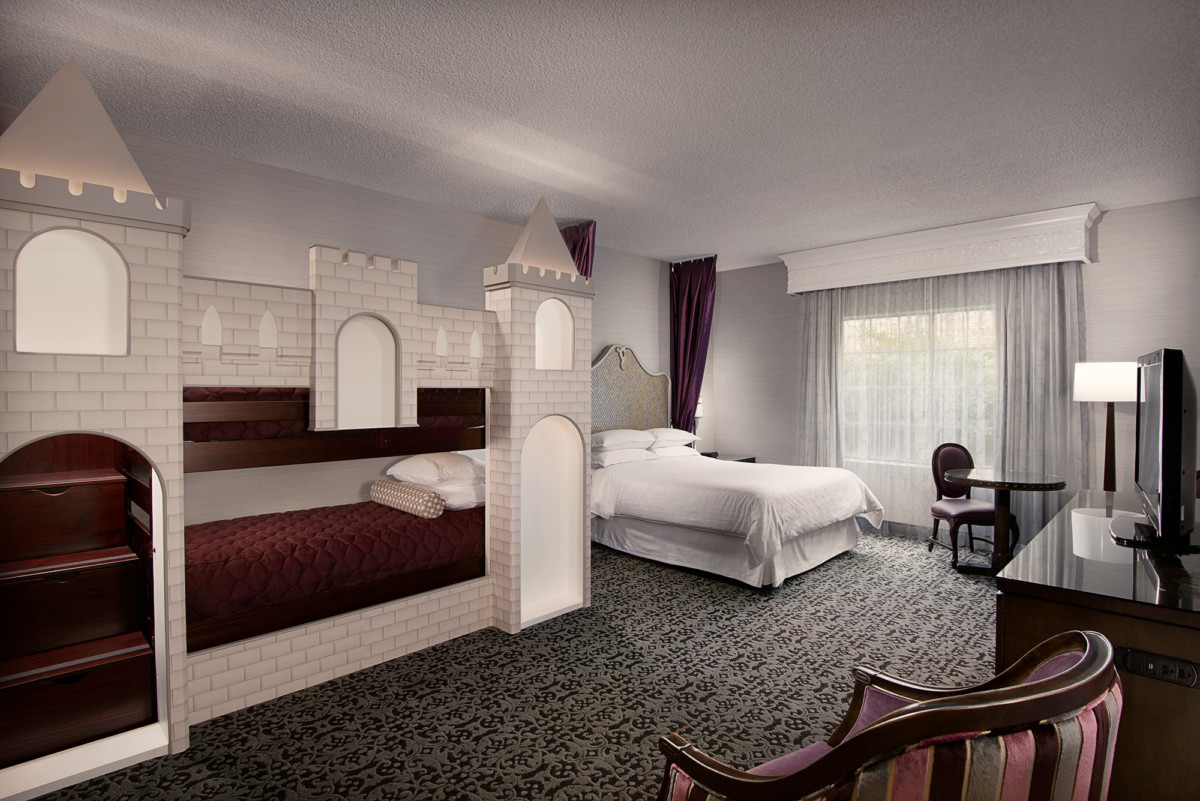 This crown jewel of SoCal theme parks is just a half-mile away and offers a  free hotel shuttle, the Dream Machine, to and from the Disneyland® Resort every day.  During our 2017 trip, we used their shuttle service everyday.  In addition to the ease of use back and forth from the parks, the service is included with your stay and saves you that daily parking fee for the parks.  Another great amenity they offer is you can purchase Disneyland® Resort Park Hopper® Tickets in the hotel lobby at the Disney Desk.  Once you get here to our hotel, you’ll be stunned by the grand castle entry,  Anaheim’s largest hotel rooms (averaging almost 500 square feet), an outdoor swimming pool, bar, restaurants, and 13 acres of tranquil gardens, ideal havens for unwinding from a day of Disneyland® Park fun.

Scott has 3488 posts and counting. See all posts by Scott

Celebrating the Fourth of July at Disneyland Resort

From Rags to Royalty – Life Lessons from Cinderella

May 22, 2018April 16, 2020 Guest Blog
Do NOT follow this link or you will be banned from the site!
We use cookies to ensure that we give you the best experience on our website. If you continue to use this site we will assume that you are happy with it.AcceptPrivacy Policy