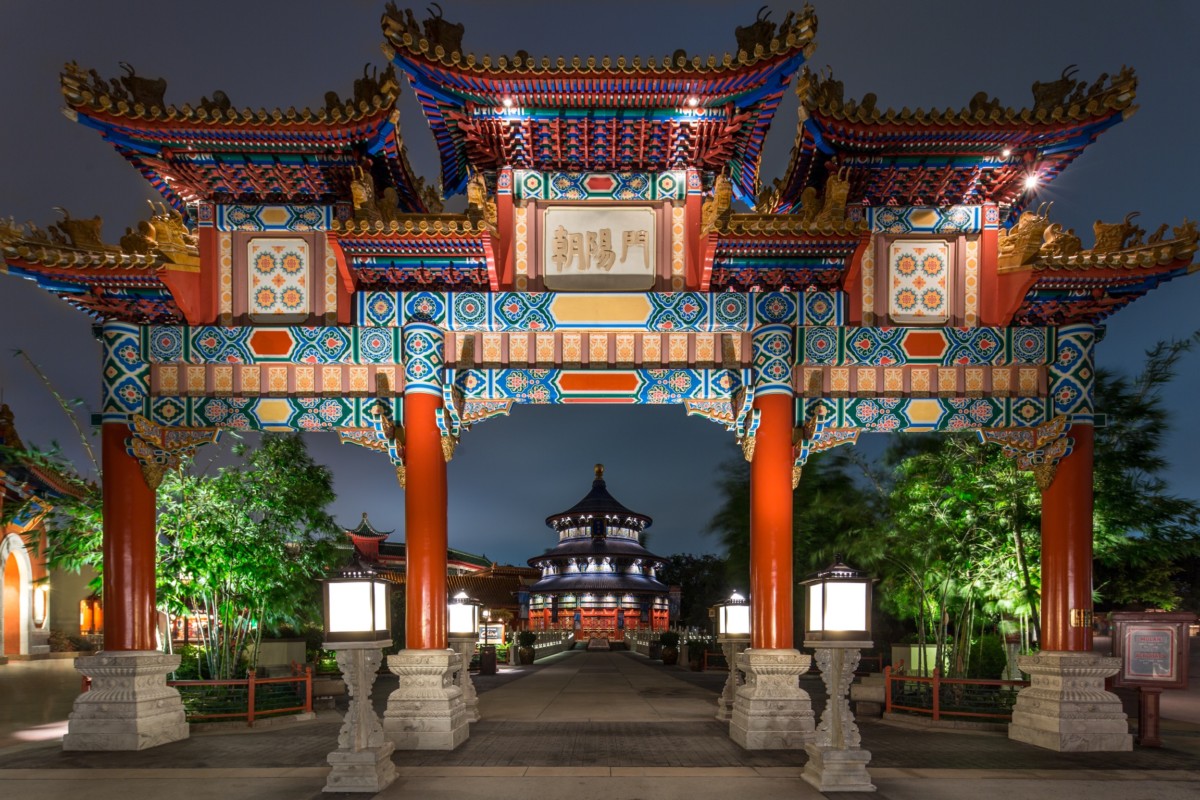 As you round the corner walking away from Norway into China, the first thing that becomes immediately noticeable is the Zhao Yang Men. Translated, this means the “Gate of the Golden Sun”. The ceremonial gate is modeled from the summer palace of the emperor in Beijing. The architecture of the China pavilion focuses mainly on the Imperial Palace and also the Temple of Heaven Park in Beijing.

A little further into the pavilion, the circular three-tiered reproduction of a building in Beijing lays the Temple of Heaven. It is a scaled building of Chinas Hall of Prayer for Good Harvest. In ancient times emperors would hold ceremonies and pray for good weather to have plentiful harvests. The Hall of Prayer for Good Harvest is also the earliest complex of the country’s Temple of Heaven. Inside the Temple of Heaven lie four main pillars that symbolize the four seasons. These four pillars support a beam that represents Earth, which in turn is supported by a round one that represents Heaven. Look up while in the rotunda and look at the gold medallion in the center of the ceiling. If you look closely you’ll see a dragon and a phoenix. The dragon indicates power while the Phoenix represents peace and prosperity. The two together signify a marriage. Take some time to walk around this area, not only is it beautiful the acoustics are pretty cool also. Outside the building, there are twelve pillars that represent the Chinese calendars twelve months.

Once you’ve taken a look around inside head on into the Circle-Vision 360 film Reflections of China. In this 13-minute film, Li Bai the Tang Dynasty poet will be your guide as you experience what China was like in the past and what it’s like now. You’ll experience things like the Huangpu River, The Huangshan Mountains, and the Yangtze River.

Near the entrance to the attraction, you’ll find a door into another exhibit called the House of the Whispering Willows. Early during the life of the pavilion, the Chinese government had an agreement to allow artifacts from the Republic of China’s to be displayed. It was the first time exhibits from here had been shown outside of the country. Over the years it has changed exhibits but now houses one of the best ones in all of Walt Disney World. The exhibit Tomb Warriors: Guardian Spirits of Ancient China is a gem to behold. Here you will find a scaled down version of the Terracotta Army of Qin Shi Huang. There is a plaque that reads:

These tomb warriors were indented to be the protectors of the emperor beyond the grave. Because nearly all the faces of the tome warriors are unique, some archeologists believe that the figures were modeled after real soldiers.

Many other emperors followed Qin’s example and created their own special armies. One tomb even provided a mess hall for the convenience of the terracotta statues.

The ones on display are scaled down because the real ones are a life sized 6 feet tall on average. You can also see various other displays of artifacts from the Chinese culture throughout the exhibit. 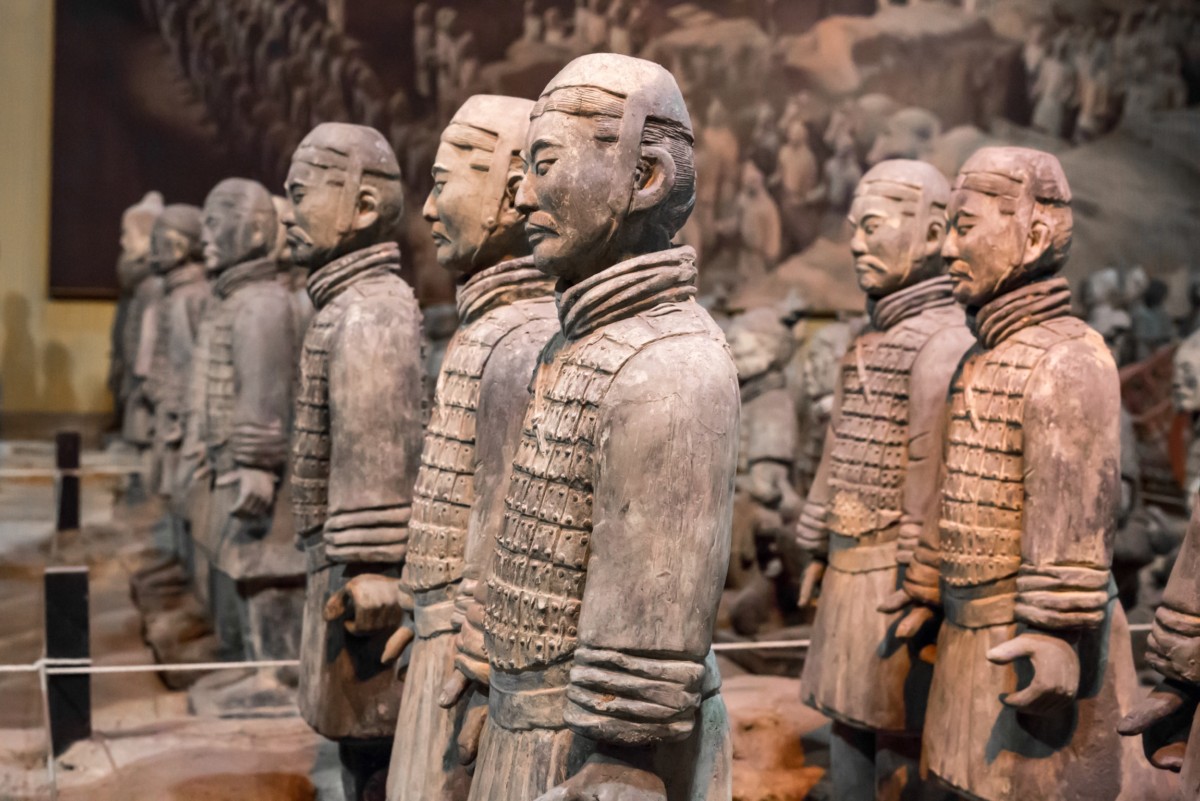 Another awesome entertainment attraction to definitely check out is the Jeweled Dragon Acrobats. This group of 18-21 year old is a spectacle to behold. Performing 5 times a day, there are plenty of chances to watch as they define gravity with grace and splendor. And if meet and greets are a must, then you’re in luck, because here is the place to catch the heroine Mulan.

Now as you’re meandering throughout the China pavilion you are traversing on the Xing Fu Jie or the “Street of Good Fortune.” Imagineers intentionally made these streets seem smaller to give the feel of the crowded conditions one would experience while in China. As with any other pavilion, tak the time to look all around you. On the roof of the Nine Dragons is a figure of Prince Min. Prince Min was a ruler who was hanged in the 3rd century. Behind him various animals have been placed to keep the prince from escaping. This is used in China as a warning to any oppressors who may feel the need to attack.

If dining is your thing and you love some Chinese food then head on over to the Nine Dragons restaurant and experience fan favorite faire such as Honey Sesame Chicken and the Kung Pao Chicken. There is also a counter service called the Lotus Blossom Café. Here you can get some of the basics like pot stickers, egg rolls, and shrimp fried rice. My personal favorite ice cream on Disney property can be found here also. If you have a inkling to try it, get a cup of the caramel ginger ice cream, it just tickles the taste buds. Over across from the pavilion is a promenade kiosk that opened in 2007. The Joy of Tea stand is the place to go if Mango Green Tea Slush or a Canto Loopy is your cup of tea.

The China pavilion is home to two shopping spots. One is the Good Fortune Gift shop. Here you can choose from a small selection of Chinese souvenirs like umbrellas and puppets. The other gift store is the House of Good Fortune and is the bigger of the two. The shop has a massive selection of Chinese goods like vases, lanterns, Teas and jewelry. It is ran by the China Pavilion Exhibition Corporation and the company’s president Dr. Nelson Ying and his family has sponsored the pavilion from the beginning. Also located inside is the ever-popular Kidcot station.

Well that concludes this months’ article on the China pavilion. I hope you have enjoyed the journey and I look forward to seeing you again as we take a stroll through Germany.

TMSM’s Adventures in Florida Living ~ We are BACK!

Review: Pixar’s Lava And Inside Out

June 14, 2015April 13, 2020 Scott 0
Do NOT follow this link or you will be banned from the site!
We use cookies to ensure that we give you the best experience on our website. If you continue to use this site we will assume that you are happy with it.AcceptPrivacy Policy