This year, Disney is celebrating the 90th birthday of the one and only,  Mickey Mouse.  In honor of his birthday, D23 along with the Walt Disney Archive has created a special gift for their Gold members to enjoy.  This box, “Walt Disney’ Mickey Mouse” is just amazing for any Mickey or Disney collector.  The box contains 23 (D23 – 23 see how they did that?) meticulously reproduced items that include Mickey from over his 90 years. 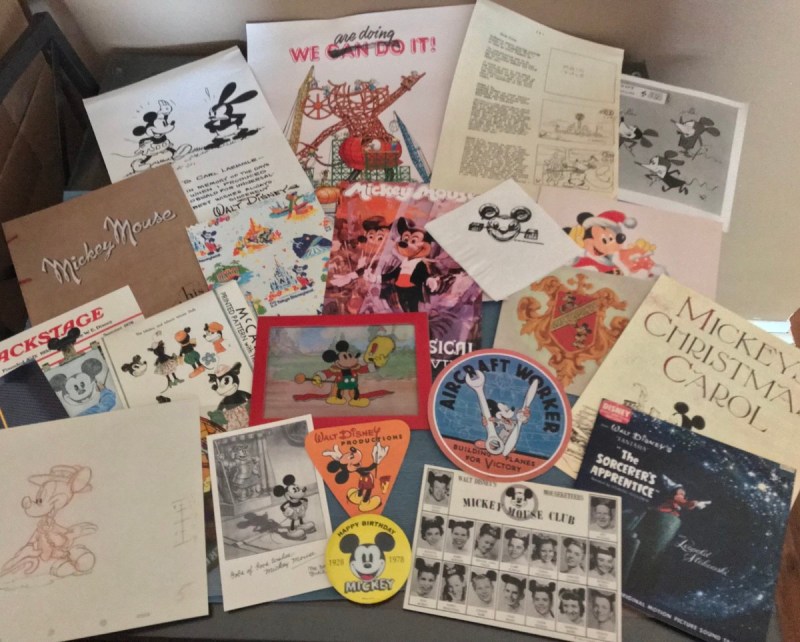 As you can see, there are so many great items in the box, to go into detail about each one would take some time.  I decided to pull a few of my personal favorites and tell you a bit about them. 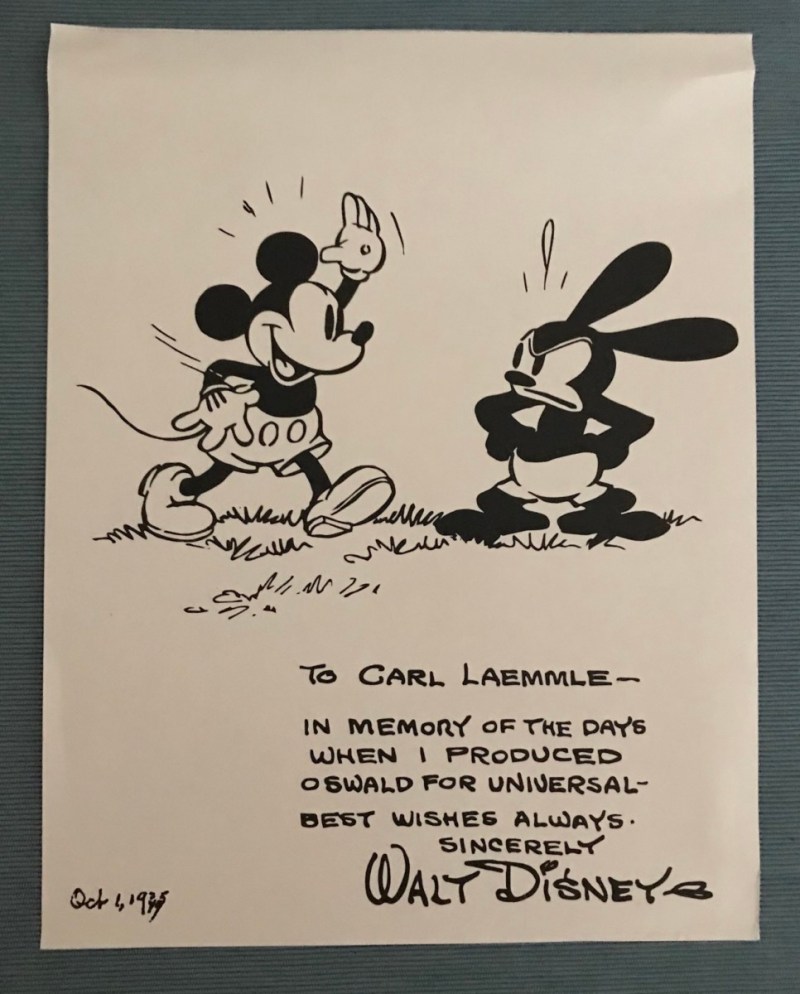 Anyone who is familiar with Disney knows that Oswald the Lucky Rabbit was Walt’s first character to be featured in his own cartoon. When Walt lost the rights to his creation, Mickey was born and the rest is history.  Walt sent this greeting to Carl Laemmle and this may be the first and only time Mickey and Oswald were “together” till Oswald came back home to The Walt Disney Company in 2006.

Miniature Cel from Parade of the Award Nominees (1932) 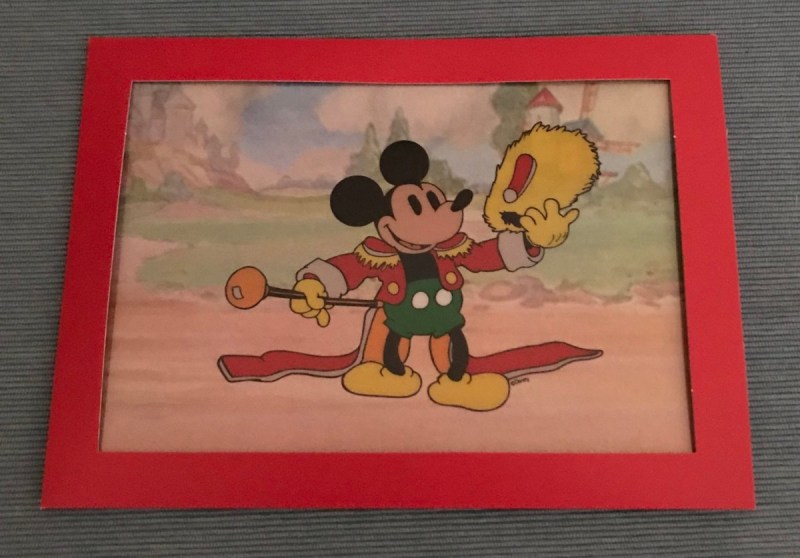 This cell above was created for one showing at the 1932 Academy Awards dinner.  This was the first time Mickey appeared on screen in color, green pants and all. 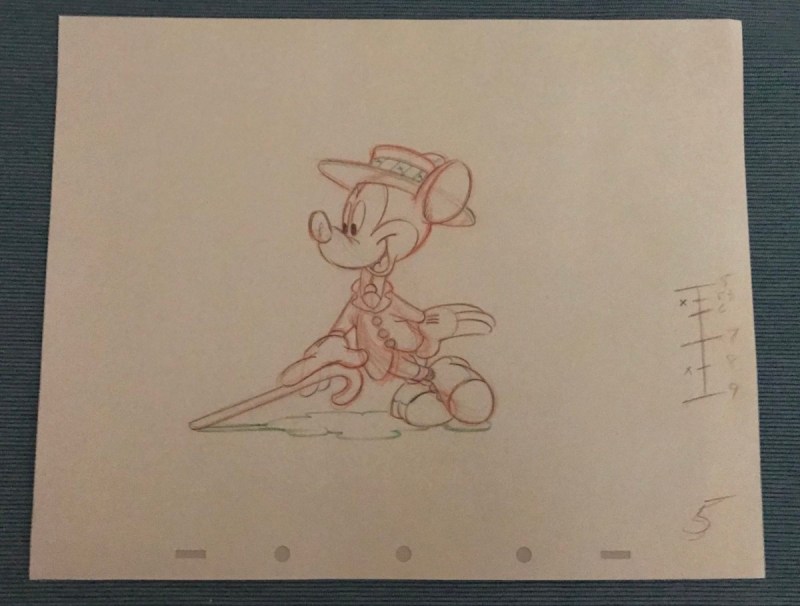 The animated short The Nifty Nineties debuted in 1941.  This animation drawing was done by Disney Legend Fred Moore.  This drawing captures Mickey after he is “taken by surprise” by none other than Minnie Mouse. 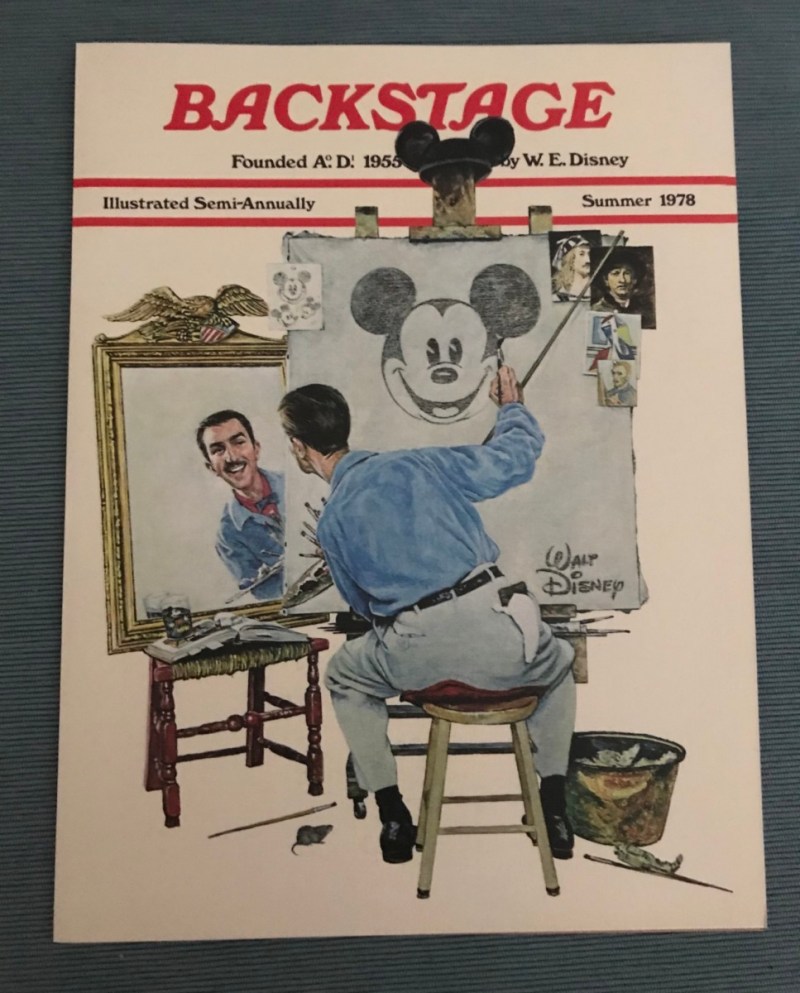 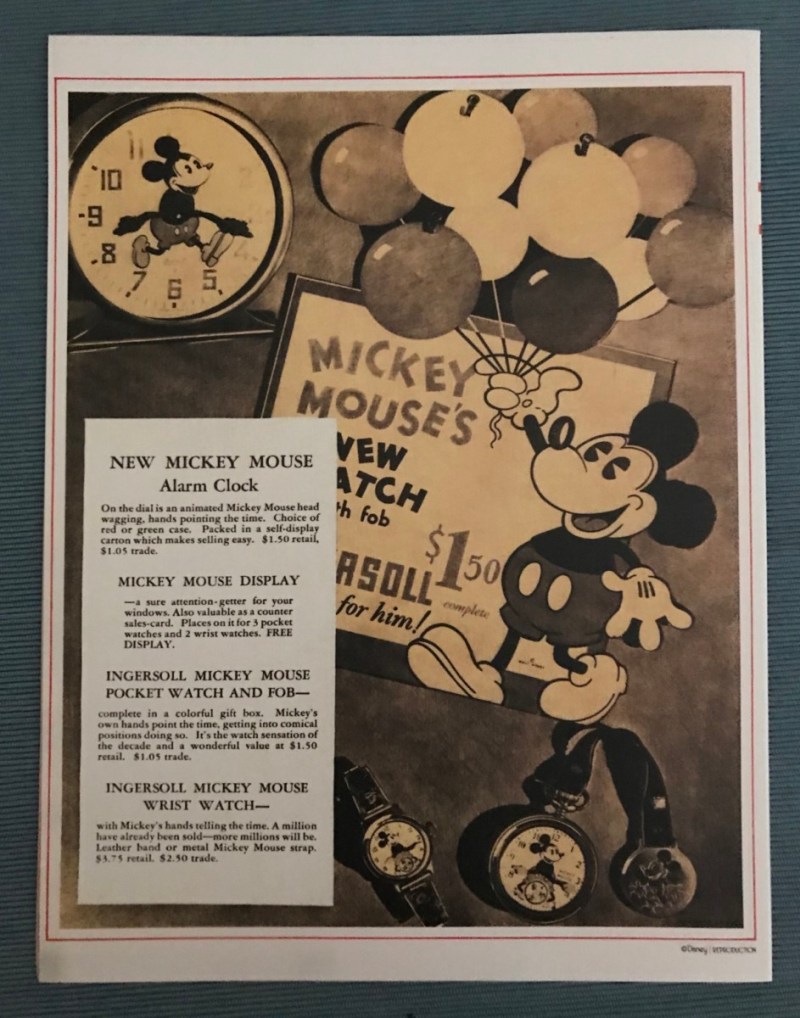 This card from 1978 was part of the Disneyland Backstage Cast Magazine.  Inspired by Norman Rockwell’s famous Saturday Evening Post cover, Charles Boyer’s “Triple Self Portrait” celebrates Walt and Mickey.  The back of the card features different Mickey watches. 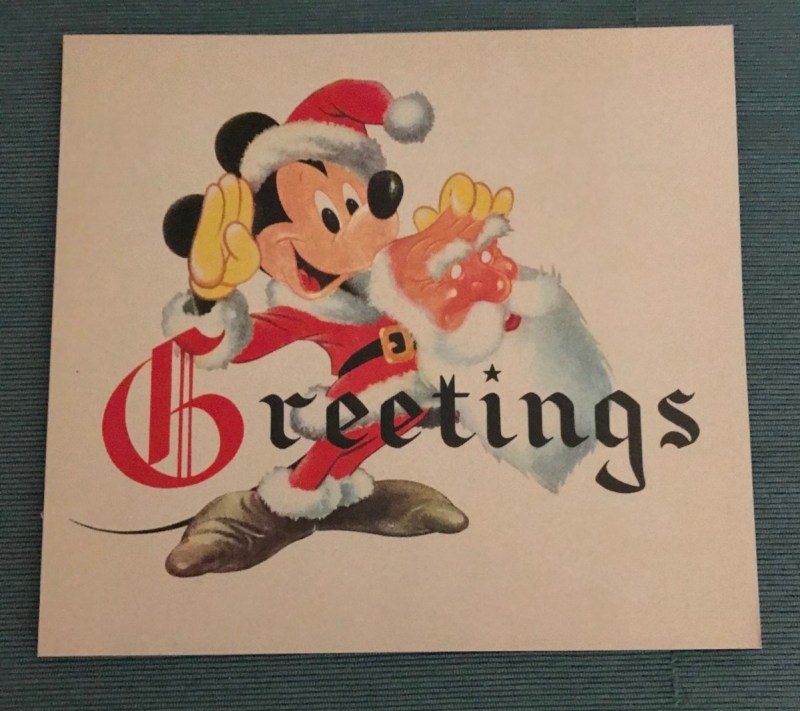 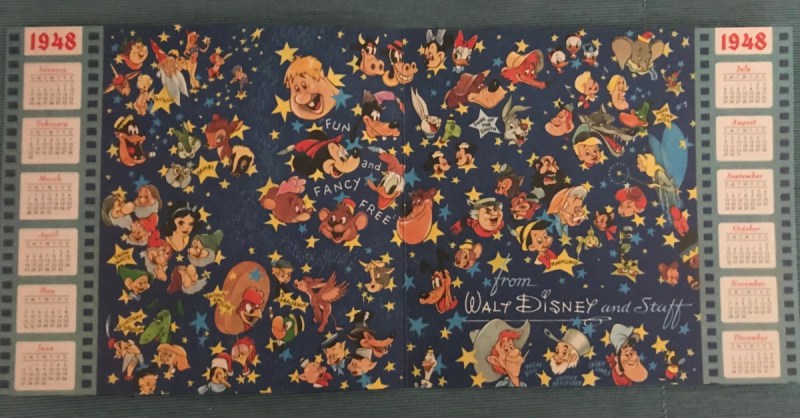 Walt traditionally sent out holiday greetings, and this reproduction of the 1947 card is just awesome.  On the front, artist Hank Porter depicted Mickey Mouse as Santa.  Once opened, the card shows so many different characters from the Disney Family.  As an animation fan, to see all these different characters all contained in one sheet is just amazing. 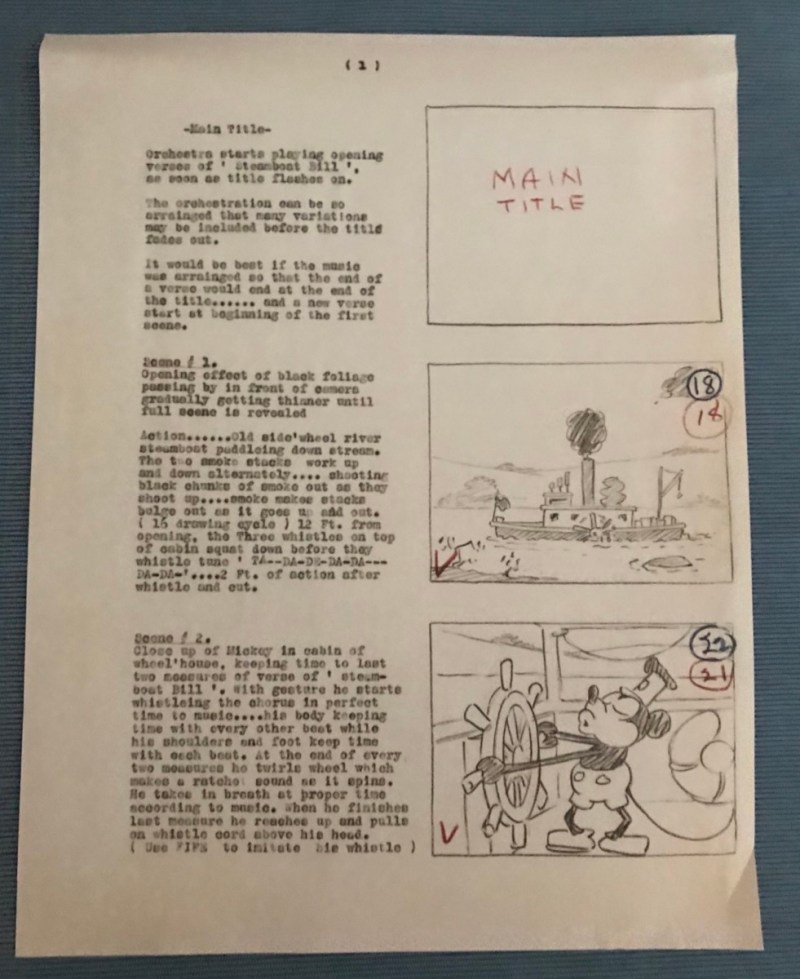 Steamboat Willie is the classic short that featured Mickey and the first to have a  synchronized soundtrack.  The very familiar drawing of Mickey as captain of the ship is one that all fans have seen.  This script sheet was kept in Walt’s desk and found by Dave Smith in 1970 when he was tasked with the job of cataloging the entire office, which had been untouched since Walt’s untimely passing in 1966.  The thought that he kept this so close to him, speaks to how important Steamboat Willie was to Walt. To be able to see how they storyboarded the short is a piece I will treasure within my own collection.

Now if you would like to get your own box of Mickey goodies, you can visit https://d23.com/membergift/ for more information and join D23.  While there, you can explore a little more detail about each item and watch the video with Ashley Eckstein (Ahsoka from Star Wars Rebels and creator of HerUniverse) and Bret Iwan (the voice of Mickey Mouse) about the box.

I would personally like to thank Jeffrey Epstein and D23 for sending me this box to review and add to my Disney collection.  This is a must-have for any Disney or Mickey Mouse collector and I’m so excited to have it.  My only problem is to find a way to display each of the pieces for others to see and enjoy.  Be sure to visit D-23’s site for more information! Thanks and enjoy! 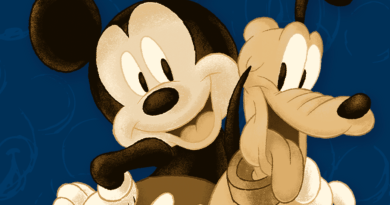 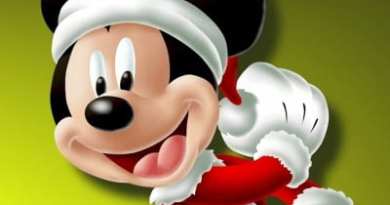 Mickey Mouse and Santa Claus…. What do they have in common?

Did You Forget Something?