Riding the wave of the epic film opening of Marvel Studios’ “Thor: Ragnarok,” guests aboard the Disney Magic are finding even more ways to unleash their inner Super Heroes and mythical gods during Marvel Day at Sea. And a huge thrill for everyone, the mischievous Loki is making his debut as part of a Disney vacation experience for the first time ever!

While on board, you may come face-to-face with Thor or catch Loki lurking around the ship, as these half-brothers take a brief break from fighting side-by-side or their latest bout of sibling rivalry. In fact, Loki’s presence on Marvel Day at Sea marks his very first appearance as part of a Disney vacation experience. 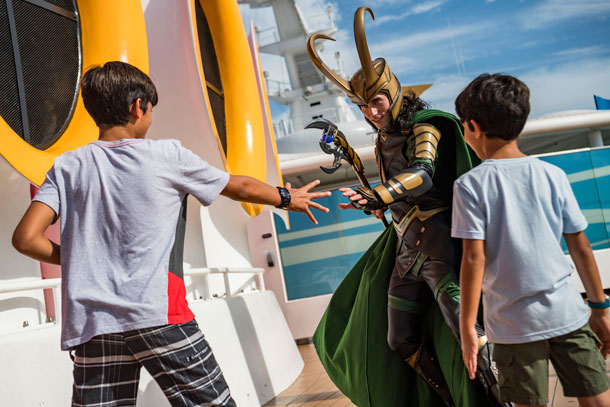 If you happen upon Loki, he may charm you like only the God of Mischief can. But always remember, Loki is a roguish trickster, burdened with the glorious purpose of spreading mayhem!

Thor and Loki also appear in “Marvel Heroes Unite” – the action-packed stunt spectacular that showcases Marvel Super Heroes and Villains, facing off in a sensational battle at sea.

During Marvel Day at Sea and on all Disney ships, year-round, you can see the biggest Disney and Marvel films onboard, the same day they are released on land. Marvel Studios’ “Thor: Ragnarok” is now showing now across the Disney Cruise Line fleet.

Marvel Day at Sea is on select 7- and 8-night Disney Cruise Line sailings from New York this fall, and returns on select 5-night Western Caribbean cruises from Miami in early 2018. Keep following along on the Disney Parks Blog as we unveil more details, and take a look back at past posts to get up to speed on this unforgettable day at sea:

Moms Panel Monday: Tips for the Making the Most of Mickey’s Not-So-Scary Halloween Party

Sweet Valentine Wall-E Cookies ~ Here’s how to make them!

June 24, 2014June 24, 2014 Scott 0
Do NOT follow this link or you will be banned from the site!
We use cookies to ensure that we give you the best experience on our website. If you continue to use this site we will assume that you are happy with it.AcceptPrivacy Policy