By Guest Blogger Cora Helton
Recently we shared “A Review Of The World Showcase’s Destinations Discovered Tour Part 1” with you. Today we want to continue Cora’s tour around the showcase with you!

On to China! Julie shared some great historical information about the emperor’s seal outside the Temple of Heaven, the symbols inside, and the Guardian Lions (or Foo Dogs) near the gift shop (specifically that the lion on the right is male, but the one of the left is female since she has her cub under her paw!) Being a child of the 90’s, my favorite piece of info is that Christina Aguilera actually filmed Mulan’s “Reflection” music video inside the Temple! 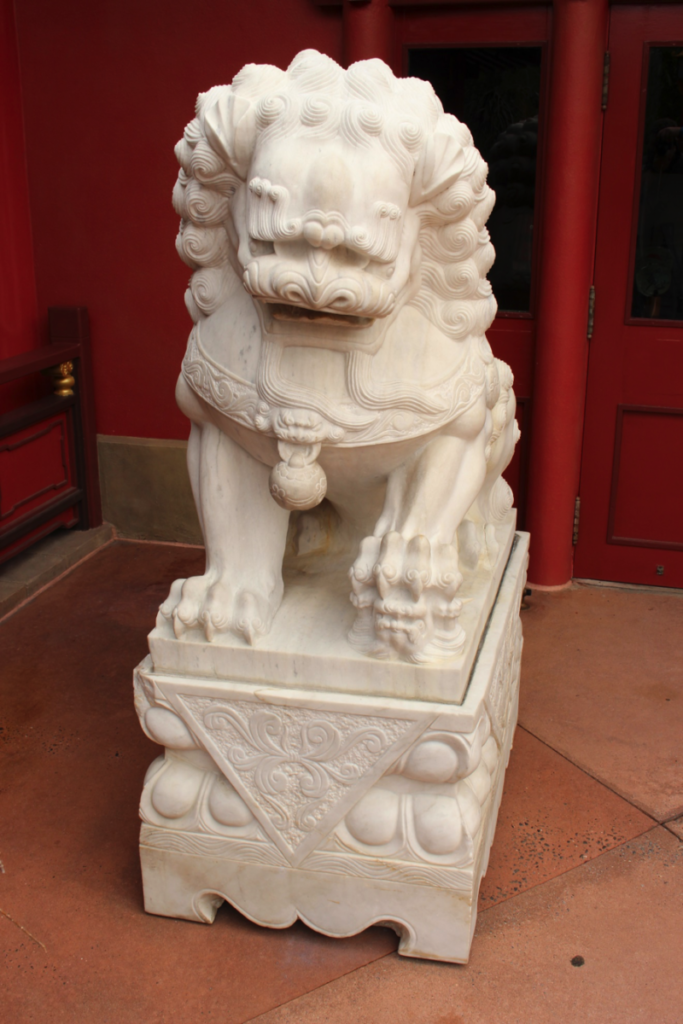 We moved onto Germany where we saw some CM’s changing out the flowers around Karamell-Kuche. Julie told us that these CM’s were “camera shy”, and we were reminded never to snap shots of CM’s working around world showcase before it opened to the public. We enjoyed watching the way they efficiently switched out the flowers as Julie shared the story surrounding the fountain (water feature!) and clock inside the main courtyard. 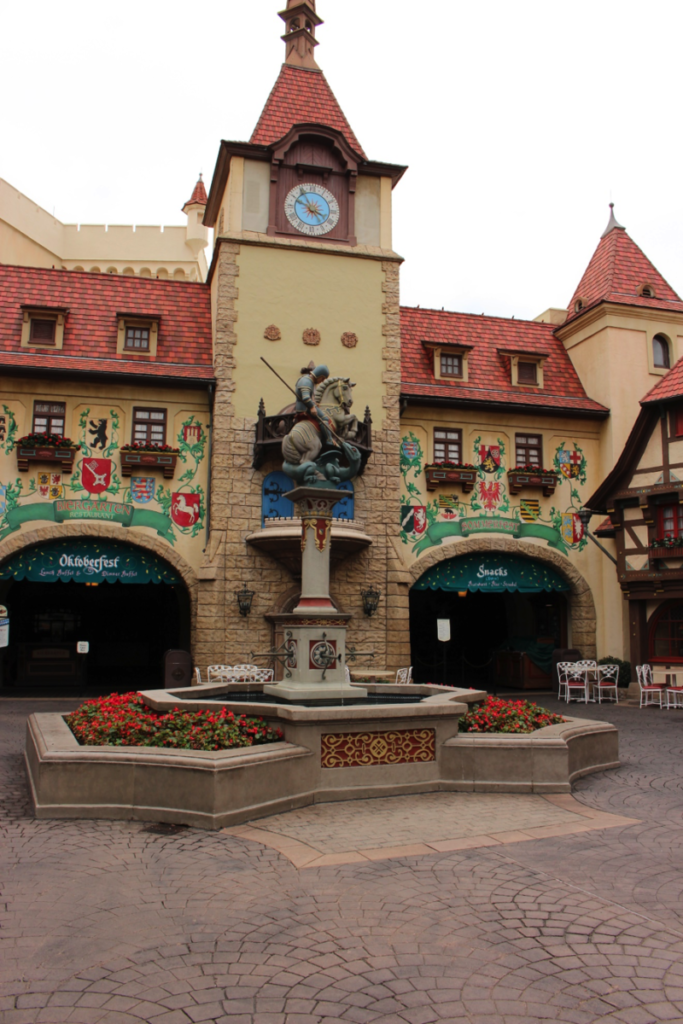 (The Courtyard of the Germany Pavilion.)

Julie then escorted us out of Germany and as we made our way to Italy, she had another little surprise for us. The little fenced off patio overlooking the lagoon outside Italy was VIP viewing for Illuminations, and we were all on the list! Everyone immediately started rearranging their itinerary to take advantage of such a unique opportunity!
As we walked into Italy’s courtyard, Julie made very certain that none of us passed through the main columns. She launched into the history and design of the pavilion, and concluded her story by telling us that criminals were actually hung between the original columns in Italy, so it’s considered very bad luck to pass between them! I know I’ll walk around next time!
The American Adventure had a very interesting lesson in forced perspective. We’re all familiar with how Disney uses forced perspective to make us think objects are bigger than they are. The bricks on Cinderella’s castle get smaller on the upper levels, faux floors are added on buildings, “tall” objects are placed on top of buildings (*cough*Eiffel Tower*cough*), but The American Adventure building is actually the opposite, it’s designed to make the building look smaller than it actually is! Check out the faux doors near the entrance, they look normal from afar, but if you go right up to them, you’ll see how massive they are! This is necessary because of the space that the giant moving animatronics require.
My husband was very excited about the opportunity to take photos around Japan without the public. It truly is a work of art, and he would tell you that this unique photo op was worth the price of the tour alone. Julie told us that the castle is actually designed to look like an heron scooping up a fish from the water. It’s hard to see at first, but if you do like Figment does and use your imagination, you can picture the story in the design. 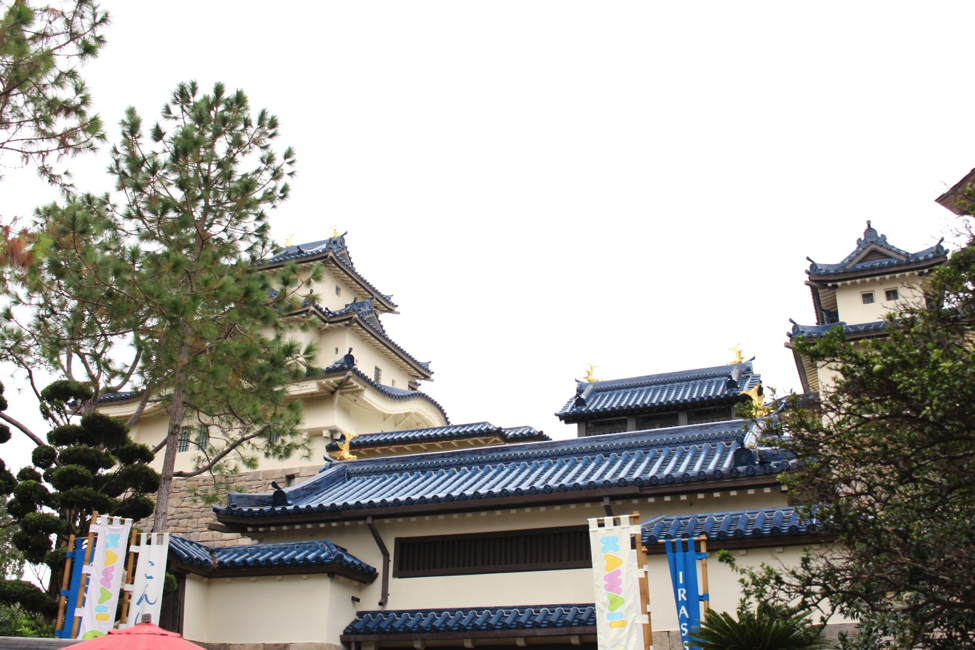 (The White Heron Castle in the Japan Pavilion.)

Julie shared that Morocco is her favorite pavilion, and her passion for its design and attention to detail was evident. I learned that the King of Morocco was so excited by EPCOT and what Disney World was doing to bring nations together, that he himself asked to have his country included. The king sent his personal builders and artisans to hand carve and tile the beautiful artwork you see all around the pavilion. An interesting fact: There’s a large gouge in the left side of the fountain (water feature!). It looks a bit like someone in an ECV got a little too close after enjoying the wine part of the Food & Wine Festival…but no, it was actually put there by the artisans in the belief that only God can create something perfect. 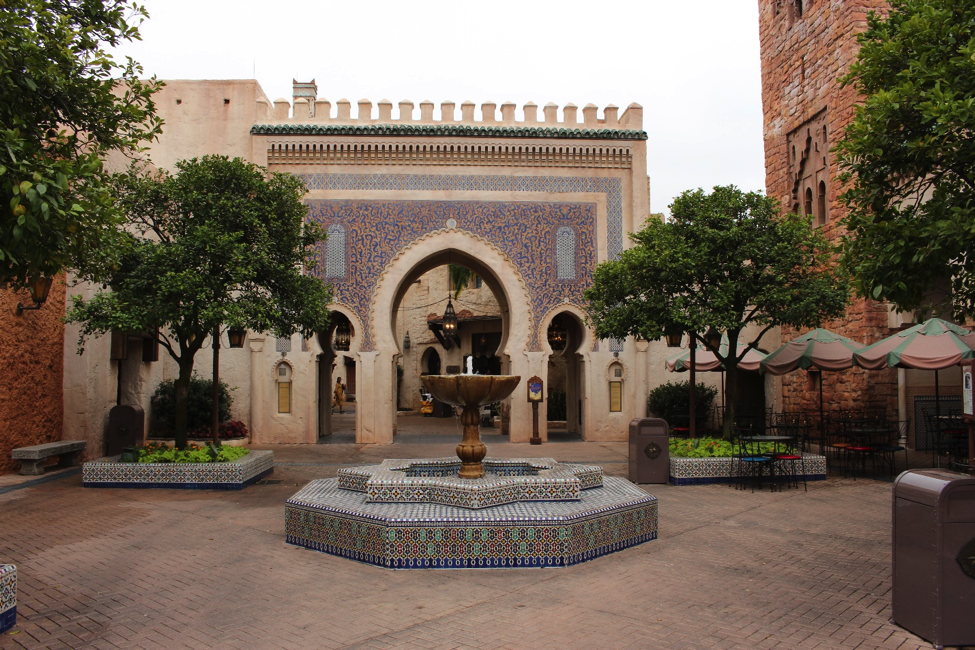 (Note the detail in the tile work inside the Morocco Pavilion.)

Well…we couldn’t have the place to ourselves all day, and we were greeted in France by a jovial public, enjoying their late-morning champagne and pastries. Fortunately, this was our next backstage stop, so we left the crowds behind and ventured back into the world of beige.
The first thing Julie showed us was the formerly impressive Eiffel Tower, built on a smaller scale, and yes, perched on top of the Impressions du France building. We witnessed some less magical sights, like Cast Members eating lunch, and Belle rushing on stage while straightening her hair (which is not at ALL a wig, I’m sure.) We were then face to face with what appeared to be the world’s largest, ugliest, canvass tent. Julie told us that this tent was erected for a special event years ago, but proved such a useful space that it has become a permanent fixture. The problem is that, being made of canvass, it’s susceptible to catching fire if there’s a rogue ember from Illuminations. This is circumvented by literally installing sprinklers that wet down the structure every night before the show. We walked around the tent, where a door was ajar. Julie said this was a special opportunity that was too good to pass up, and allowed us to have a peek inside. In this ugly tent was the most beautiful venue I’ve ever seen. I guessed that they may have been setting up for a wedding, as there were CM’s hanging stunning iridescent crystal chandeliers and setting up tables and chairs. If you’re a Disney fan with a wedding coming up (and probably a large budget!), this would be a truly magical venue for your vows.
This tent is actually what lies behind the giant gates between the UK and Canada pavilions. We exited, noting the large mirror so that Cast Members can make sure they’re in “Disney Look” before going on-stage.
At this point we were all starving, and luckily our lunch was ready at The Rose and Crown. Having pre-ordered, everything was brought out quickly, allowing us just the right amount of time to chat and get to know our fellow tourists while taking a nice break from the walking. Each couple got to share a scotch egg appetizer and a bread pudding desert, and each individual got to choose from one of several delicious entrees. One member of our group had several special food requests, all of which were met with no issues. Alcohol was not included with the cost of the tour, but we were given the opportunity to order drinks for an additional cost.
We resumed our tour with the UK, which is in my opinion, one of the best designed pavilions. Each shop represents a different era of architecture in the UK. From the structure, to the stone work, to the interior design and paint. Even the thatched roof on the Twining’s cottage is authentic to the time…with the slight exception that it had to be made from plastic broom straws; the real thing can’t stand up to the Florida weather. 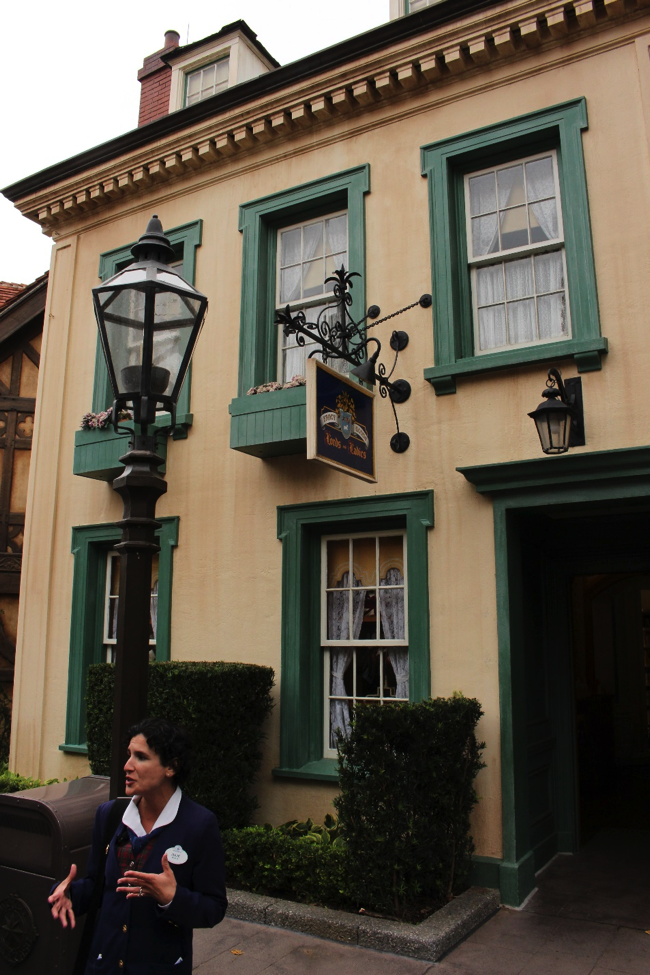 (The wonderful Julie telling us about the architecture in the UK Pavilion.)

Finally, my favorite pavilion in the World Showcase: Canada. I almost didn’t want to magic of this pavilion ruined for me, but curiosity won out. Did you know that the flowers in the Victoria Gardens are changed out seasonally, to accommodate the weather conditions but also to bring in the colors and themes of the season. We were encouraged to touch and examine the three totem poles near the shop: One is fake, and two are real. One of the real totems also contains a hidden mickey! Julie pointed out the forced perspective to make the Hotel du Canada seem much, much larger than it actually is, and told us that the same techniques were used on the mountain. We were then taken back stage to learn more about the trickery Disney used to make the Canadian Rockies come to life. They are actually sculpted out of the same material used to make swimming pools, so from the back side, the falls resemble an empty, misshapen swimming pool. The forced perspective continues by choosing smaller plants on top of the mountains. Obviously, plants don’t stay small forever, so they’re kept in planter boxes in order to be easily switched out. I’m not sure what happens when a plant is deemed too large to keep up the illusion, but I would happily give them a home in my back yard. Hit me up, Disney! 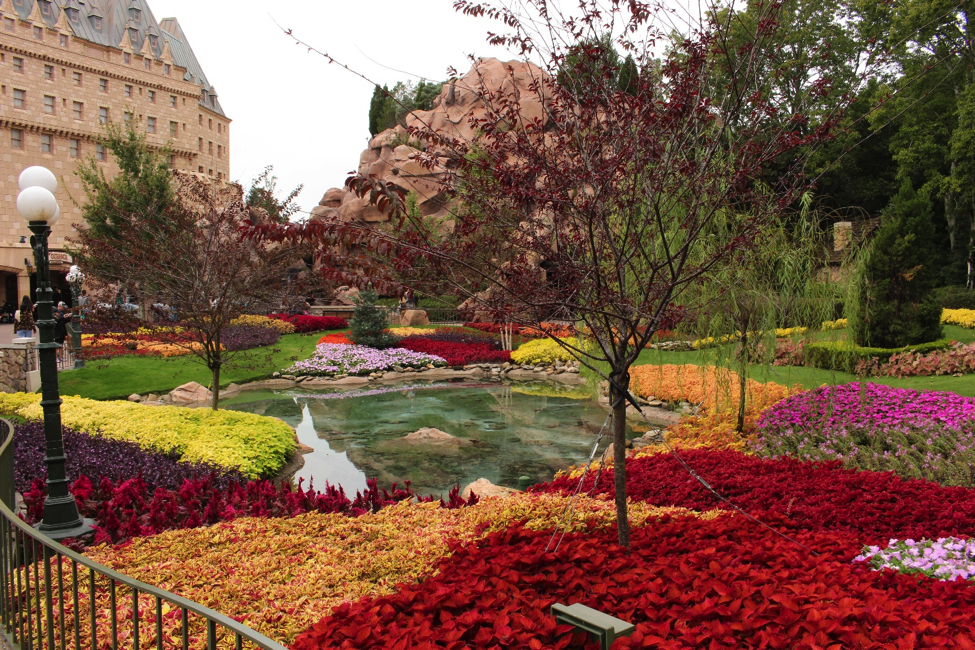 (The Victoria Gardens with the Hotel du Canada and the Canadian Rockies.)

Our friend Julie escorted us back on-stage, where it was time to say our goodbyes. Julie first checked to see if anyone was running late for dining reservations or fast passes, which she could fix for us if this was the case. Once we all assured her there weren’t any conflicts, she passed out our special Destinations Discovered pins!
I highly recommend this tour for anyone who enjoys history (both world history and Disney history), or architecture. It would also be the perfect adventure for anyone who feels they’ve done all they can do in the World Showcase. I found something new in each pavilion, much to my delight. If you are new to Disney, I wouldn’t recommend this tour as your first World Showcase experience, unless you plan on spending the entire day in this portion of the park to enjoy the shops and dining we were unable to stop at. In that case, it could be a very thorough introduction to the detail and magic Disney puts into all it’s endeavors. And of course, if you’re a photographer, this is the tour for you.
At the end of the evening, we returned to the World Showcase for our VIP Illuminations viewing with a fresh take on that side of the park. There’s so much more to explore! 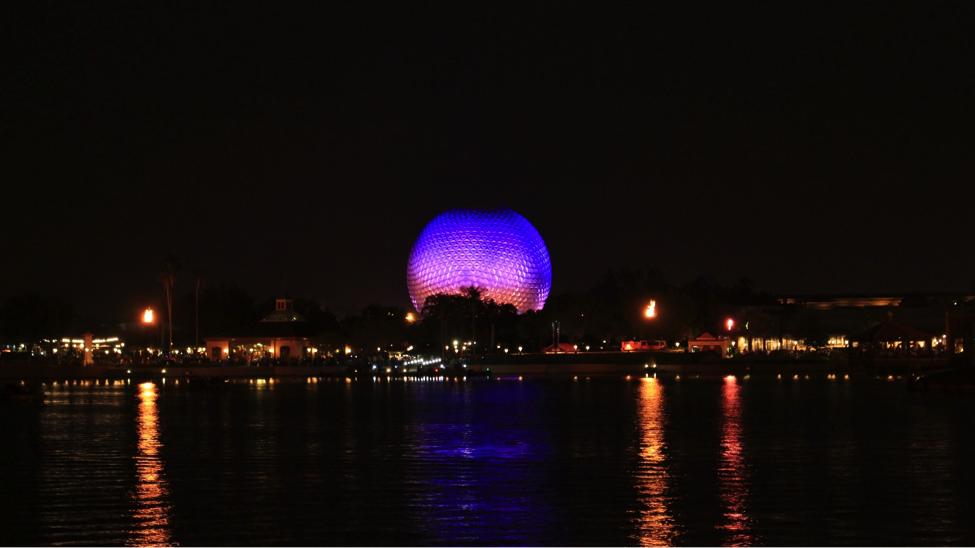 (Our view from the VIP Illuminations viewing area.)

Check back for my Epcot tour review: UnDISCOVEREDed Future World!

Cora Helton all photo credit to Benson Helton 2016.
Cora has been a Disney fan since she was a child, but in 2014 she discovered the joys of Walt Disney World as an adult. Cora enjoys touring the parks with her husband Benson, and her favorite characters are Figment and the Florida Orange Bird.

What Adventures By Disney is Like, by a ABD veteran

Racing Disney: The Best Places To View Your Runner!

Having a Magical Day at Disney with POTS! By Guest Blogger Samantha Carver

Where Can You See This? Disney Vacation Club Edition Vol. 2

August 18, 2020August 18, 2020 Guest Blog 0
Do NOT follow this link or you will be banned from the site!
We use cookies to ensure that we give you the best experience on our website. If you continue to use this site we will assume that you are happy with it.AcceptPrivacy Policy