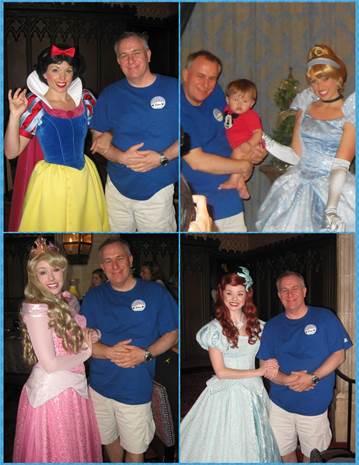 During a trip to Walt Disney World a while back, the girls on the trip started talking about who was their princess. One said Snow White, another said Cinderella, still another Aurora and soon they all had their Disney Princess. Not wanting to be left out, I thought who was my Disney Princess? Ariel was special because when the movie came out, I took my god-daughter who was 8 at the time and one of her brothers to see it. Taking my god-daughter to the movie was a way of connecting with her more than just giving presents at Christmas. It was our first Disney experience together but in no way was it our last because we soon began our annual trips to Disney together. Aurora was special because when Sleeping Beauty came out on VHS, I bought one for my god-daughter and one for me so we had that movie as well to share. Now Cinderella, she blew me a kiss during a parade which put her on the list, and then there was Snow White, the fairest one of all, and the first Disney princess from Disney’s first full length animated feature. How was I to choose?

I couldn’t do it and the list of Princesses grew; Belle, Jasmine, Pocahontas, Mulan, the question was not getting easier as the years went by. During another trip to WDW, we invited one of my sister’s best friends and her 2 daughters to join us. This lead to more people choosing their Disney Princess and I still did not have one. It was a new generation coming with me “Uncle John” which is what they called me even though I was only Uncle John to my sister’s son. They became my nieces not by birth or blood but by choice and by heart and we traveled to WDW many times and Disneyland twice one of which was during its 50th year. We would go during the summer when they were off school, sometimes around Christmas, and we even went in October after 9/11, and I still did not have a Disney Princess. I see many people on TMSM and FB have their princess so why couldn’t I choose?

Over the years of traveling we grew closer, my youngest niece would make sure her mom would give me a CD of the pictures she took. She would tease me about not having a cell phone when she already did. I let her use the video camera and she added her commentary. She was too young to drive the water mice by herself so she would be my driver on Seven Seas Lagoon and Bay lake so I could take video. Everywhere we ate, she would order a Coke no ice, and I learned while I don’t drink soda, my drink is Lemonade, I order it with no ice because of her.​ 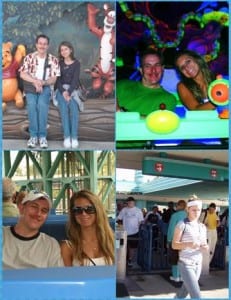 During our first Disneyland trip, my youngest niece wanted a Minnie Mouse, the big one, and we have a tradition that everyone gets a last night gift which meant she got to pick whatever she wanted. My sister talked her into a smaller one with the excuse that “Uncle John” would have to buy another seat on the plane for the big one. She accepted that answer and settled on the smaller one. She was young, what did she know, we could have shipped it. But it did not sit well with me and when her next birthday came around, I ordered the big Minnie Mouse for her, having it shipped to us.

When my youngest niece was in her teens, she developed a pain in her leg which they thought she had strained during cheerleading. A couple of months later it was diagnosed as Ewinge Sarcoma a bone cancer that occurs most frequently in children, teenagers and young adults. During my niece’s treatments, I visited her in the hospital as often as I could and I saw in my niece a strength and a courage matching any Disney princess. She put on an epic battle; a story that could be a fairy tale and she the princess of the story. When her long blond hair started to fall out, she asked her mom for a comb and proceeded to comb it out instead of letting it fall out slowly. She took control of the situation and faced it. There was pain and sickness from the chemo, there was a leg burned raw from radiation, there were needle pokes, I.V.s, blood draws and she faced it. I saw her face all this and more. After her stem cell treatment, she was declared cancer free. So to celebrate, I told her that I would take her to Walt Disney World and that she could bring a friend. Her sister came, her mom came, her aunt, her cousins, her Uncle John. That was the year I finally choose my Disney Princess, my niece. I got to take my very own Disney Princess to Walt Disney World. I see that many people have a daughter or grand-daughter as their Disney Princess, so I think it is for me to have mine be my niece.

Less than a year later, my niece’s doctors said the cancer was back, it meant more treatments. The next summer she did not go to Disney it was just my sister, my nephew, and me. A few months later the doctors told her the clinical trial was not helping and there was nothing left they could do. My niece was born to her eternal life not long after.

May your Disney princess be as special to you as mine is to me. Who is your Disney Princess?

What Disney Is To A Kiwi by Sam from New Zealand

A Cast of New Eats at Disney’s Hollywood Studios

August 4, 2018April 16, 2020 Guest Blog 0
Do NOT follow this link or you will be banned from the site!
We use cookies to ensure that we give you the best experience on our website. If you continue to use this site we will assume that you are happy with it.AcceptPrivacy Policy