Today All Aboard: The Wonderful World of Disney Trains by Dana Amendola, a gorgeous, indispensable book documenting the Walt Disney company’s history with trains in film (both animated and live action), in theme parks (all over the world), and in real life, is released. We loved this book, not just because of its encyclopedic rundown of, say, every time a train popped up in an animated short or film, but because of the lovely stories connected with each train, and the heartwarming anecdotes you might have missed (there’s a truly riveting chapter on Disney animator Ollie Johnson’s beloved scale train that had us wiping away tears). If you don’t love trains before you pick up All Aboard, you certainly will after you’re done.

Walt Disney famously loved trains, something that he carried with him from his childhood in Marceline. He came up with the idea for Mickey Mouse while riding on a train and had many trains, of varying sizes, at his home. Later, he built trains for his theme parks and put them in his movies. Train enthusiast seems like too tame a description for what Walt Disney was. He had a passion for them. And it showed.

So in honor of Walt’s love of trains (and in celebration of the release of All Aboard), we are counting down five of our favorite Disney trains. Toot toot!

5. Constitution and the Jupiter from The Lone Ranger (2013)

The train chase sequence that ends The Lone Ranger is, quite simply, the greatest train chase in the history of motion pictures. Directed by visionary filmmaker Gore Verbinski (who staged a similar ship-to-ship battle for the climax of Pirates of the Caribbean: At World’s End) and assisted by the wizards at visual effects house Industrial Light & Magic, the sequence is absolutely stunning, featuring crisscrossing train tracks, big action set pieces, and all set to the familiar “William Tell Overture.” To accommodate the sequence, the filmmakers built five miles of railroad in the middle of the desert, as well as the two trains. (They also had a “road rig” unit, where the trains were on the back of flatbed trucks, driven through closed roads.) The Jupiter is a smaller, more passenger-oriented train and the Constitution is, in the words of production designer Crash McCreery (on the film’s Blu-ray special features), “a beast.” Added McCreery: “These trains are characters.” They are really are characters and in this climactic sequence, those characters are hard to look away from. As Amendola says, “The film is an adrenaline rush on steel wheels.” 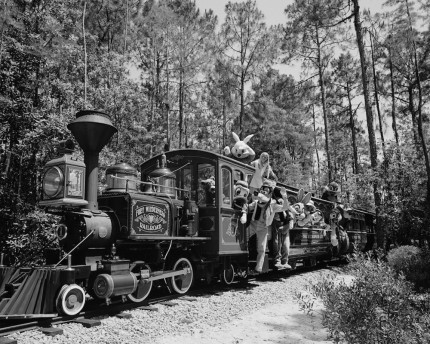 Disney’s Fort Wilderness Resort and Campground is a sprawling camping resort within Walt Disney World Resort. The Campground officially opened in November, 1971, and from 1973 to 1980 featured a marvelous, steam-powered railroad called the Fort Wilderness Railroad, which added to the campground’s rustic charm and lost-in-time theming. The engines were not given names, like the train that circled the nearby Magic Kingdom, but were instead issued numbers that were painted on their sides. (These trains were significantly smaller than their Magic Kingdom cousins, as well, but just as beautiful.) While much of the track still remains around Fort Wilderness, the resort repurposed several of the Fort Wilderness Railroad’s train cars. Two were reused as ticket booths at the entrance of nighttime destination Pleasure Island (currently in the process of being turned into Disney Springs), while another was found outside heavily themed waterpark Typhoon Lagoon, in the parking lot. Even now, the Fort Wilderness Railroad is being used to set the stage. 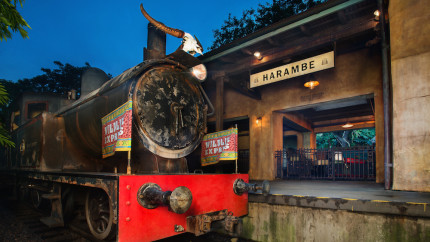 This railroad, which takes guests at Disney’s Animal Kingdom from Harambe, Africa to Rafiki’s Planet Watch, is staggering, both due to its rustic aesthetic and commitment to theme. These trains are part of the fictional Easter Star Railway, and as All Aboard author Amendola explains, was originally supposed to travel through the savanna plains so “guests could view the animals from the coaches.” (This was later shuttered due to concerns for the animals’ safety.) Still, the Wildlife Express Train is super charming, and highly stylized. Amendola points out that, unlike the Walt Disney World locomotives, keeping with the more grounded, real-world approach of Disney’s Animal Kingdom, are based on the actual East African Railway system and “purposely distressed, complete with dust, grime, loose baggage containers on the roof, off-center headlamps, and a water buffalo skull above the smoke box.” The ride on the Animal Kingdom Wildlife Express Train is short (round trip, it’s just over a mile), but very much worth it. 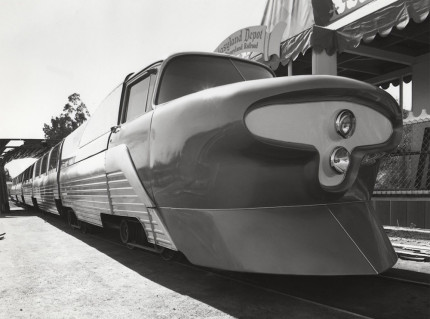 We wanted to include some kind of monorail on this list, but trains have two rails, and thusly our beloved monorails were disqualified. So, we decided to do a deep dive and find the next best thing: the Tomorrowland Viewliner. A sort of proto-monorail, with a track that ran parallel alongside the Disneyland Railroad track, when it opened in 1957, was billed as “the fastest miniature train in the world.” It was constructed by legendary Imagineer Bob Gurr and built as a scale replica of General Motors’ hyper-stylized Aerotrain. The track looped through Tomorrowland and Fantasyland, with the cars named for various planets (on the Tomorrowland side) and classic Disney characters (on the Fantasyland side) and dazzled visitors for more than a year, until construction of the nearby Matterhorn and Submarine Voyage necessitated that the Disneyland Railroad use the track. As with everything in Tomorrowland, it was a glimpse at things to come; in this case it previewed the even-more-beloved (and still running!) monorail. 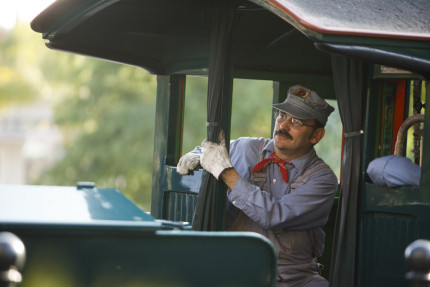 This is it: the greatest Disney theme park railroad, and also the first; this is a railroad that still dazzles us to this day (and it’s 60 years old). It’s not just a mode of transportation, it’s a thrilling attraction in its own right, and ending your day at Disneyland with a trip on the Disneyland Railroad is the perfect closure to a magical experience. The train is long, traveling a mile-and-a-half and taking more than 20 minutes. It’s also rich with history: not only do you get to see a magnificent view of the theme park, but you also get to see things like Delmer J. Yoakum’s Grand Canyon diorama (the longest in the world, featuring actual stuffed animals), and the Primeval World diorama, which was added in 1966, fresh from the 1964-65 World’s Fair attraction Ford Magic Skyway (where many of the audio-animatronics were originally held). The Disneyland Railroad has evolved along with the park (it was rerouted slightly for the Indiana Jones Adventure and sections were enclosed when New Orleans Square was developed), but it still remains as charming as ever. (Additionally, it was sponsored by the Santa Fe Railroad until 1974, since the Santa Fe line no longer operated passenger service thanks to the nationalization of Amtrak.)  Even the passenger cars are unique; we love the one that only faces outward, towards what you are supposed to be looking at. The Disneyland Railroad has four stops (New Orleans Square, Main Street, Tomorrowland, and Mickey’s Toontown) and five distinct locomotive engines, familiar to the Disneyland train watchers. On July 17, 1955, Walt Disney drove the Disneyland Railroad (he was piloting No. 2, the E.P. Ripley) into the Main Street Station for the first time. As Amendola says, “Exactly one year earlier, all that was on this 160-acre property in Anaheim were orange groves. Walt had built his park, and it was surrounded by a train.” 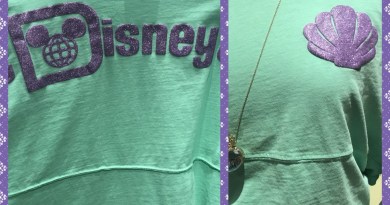 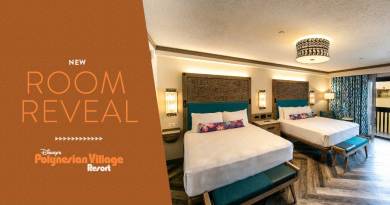 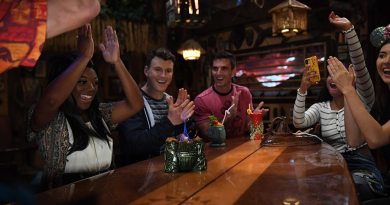 Find Your #HappyPlace: Our Favorite Lounges at the Resorts

April 25, 2018April 9, 2020 Michele 0
The Main Street Mouse
%d bloggers like this:
We use cookies to ensure that we give you the best experience on our website. If you continue to use this site we will assume that you are happy with it.AcceptPrivacy Policy