I know many people are big fans of the “emojis”, seems like there are so many different sets.  If you have the Star Wars app on your phone, check out what has been added?  This is from the Disney Insider

Even if you didn’t attend Star Wars Celebration this past spring, you got a special gift: Star Wars emojis that would pop up in your social media feed if you used specific hashtags. It was totally brilliant and really fun, especially when you watched, gleefully, as your feed exploded with colorful Star Wars characters in the middle of a dull workday. 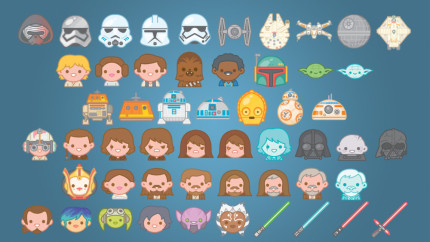 But that was just the beginning.

For San Diego Comic Con even more emojis were released (just as amazing, just as adorable) and now the entire set, including a bunch of brand new characters, vehicles, and weapons, are available as part of the deeply essential Star Wars App (available now on the iOS model and coming soon for Android). What was once a marvel of social media can now be transmitted, emailed, text messaged, and chatted to anyone. It really is a new hope.

In celebration of the Star Wars app unveiling, we chatted with Truck Torrence, a brilliant Los Angeles-based artist known for his super-cute interpretation of famous television shows and movies, who goes by the moniker 100% Soft. (We have several of his works hanging on our walls at home, including a recent, amazing Avengers: Age of Ultron print.)  Torrence is a super fan of Star Wars and perfectly suited for the project, since he’s able to boil down a character’s essence into an easily readable, identifiable symbol. Torrence could take one of the most dangerous scoundrels in the galaxy, better suited for a wretched hive of scum and villainy than your new smartphone, and make that dastardly cad downright huggable.

We talked to Torrence about how he became involved in the project, what it feels like to be bringing new characters to people, what Star Wars means to him, and which Star Wars: The Force Awakens character is his favorite to draw.

How were you first brought onto the project?

I had a solo art exhibition open earlier this year called Mass Hysteria and it was at Gallery 1988 in Los Angeles. And basically the theme of the show was pop culture crowds. So I had really, really densely populated prints of characters from movies and TV shows and I had aStar Wars print in there that had most of the original trilogy characters surrounded by stormtroopers and Darth Vader. A few people from Lucasfilm went to the show and saw the print and they ended up contacting me, asking me if I would be available to design a very limited first round of emoji for them in conjunction with Star Wars Celebration and the release of the first teaser. So the first ones I did were C-3PO and BB-8 and the updated stormtrooper. Those were the first ones I did. It was really cool and fun that they saw my original art to begin with and thought it would be a good fit for the emoji.

When you saw Lucasfilm was calling did you think, Oh great, I’m getting sued?

[laughs] No because they went through the gallery to contact me. So the gallery hit me up and said, “Would you be interested in a super, super secret project for the biggest movie of next year?”

When the emojis for Celebration were released, the internet lost its mind. How soon afterwards were you contacted about the emojis for San Diego Comic Con and now the app?

Pretty quickly afterwards. There was always talk about seeing how well the original three were going to go over and if people seemed to respond to them and people seemed to use them and people seemed to like them, then we’d like to do more. After those three were released they asked me to do a substantially bigger set, specifically they wanted me to do stuff for The Force Awakens. So I got to do Kylo Ren, the crossguard lightsaber, they had me do Captain Phasma, and a few others. Then the big push came for all the original trilogy characters, the Clone Wars characters, the prequel characters, different vehicles, and all kinds of stuff.

Are you excited about having them on the app now? They’ll no longer live on Twitter via hashtags.

Yeah, I cannot wait. I think it’s awesome. It was really, really cool to see #C3PO trending on Twitter and scroll through my timeline and see all of those little emojis being used by people. So to be able to get all the other ones to a wider audience will be awesome, I think.

What is Star Wars to you?

I can’t even remember when I was first exposed to Star Wars because it was exposed  so early in age that it was just something that was part of my makeup when I was growing up. I remember being a kid in the ‘80s and begging my parents to get me all of the figures I wanted and then after Empire Strikes Back came out, I would take all of my toys and freeze them in the freezer to mimic carbonite freezing. I was relentlessly obsessed with Star Warsall through my youth. It’s something intrinsically tied to my childhood forever.

What does it feel like to get to introduce people to these new characters?

It’s a dream. These are arguably some of the most iconic characters ever put on screen and everybody in the world knows who these characters are. So the opportunity to put my spin on them and do them in my style and to give those to everybody else and hopefully they’ll enjoy them; it’s a really, really big honor. And it’s fun too because I loved taking characters like that and doing them in my style and I do it for fun. I do it just to see how they’d look in my head. So to do it for the official app and for Twitter and to have Lucasfilm seek me out is just an incredible honor.

Who has been your favorite new character to illustrate?

I really liked doing Kylo Ren. He’s really fun because he’s a very evil character and the actual design of the character is very harsh and he has this chrome faceplate and a metal mask that makes him look very intimidating. So it was fun to take those elements and to distill them into something very soft and cute. And I don’t know who it was, but one of the notes I got back was that I needed to make him a little more menacing. But he was fun to design for sure. And BB-8 was great too. The design for BB-8 anyway is incredible and watching the practical version of him roll out on stage at Celebration was pretty amazing. So it was cool to translate him as well.

So what are you waiting for? You can now send your friends texts that conclude with an adorable emoji of BB-8! The emojis are available now, via the official Star Wars App, on iOSand coming soon for Android. May the Force be with you.

TMSM Avenger has 3457 posts and counting. See all posts by TMSM Avenger

Carrie Fisher aka Princess Leia Has Passed Away