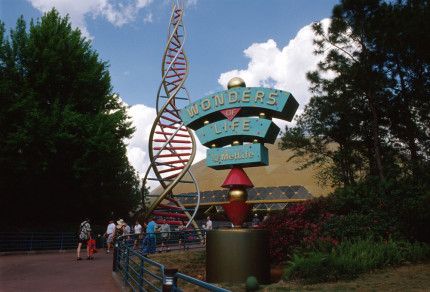 In 1987 Disney announced plans for the newest pavilion at EPCOT Center’s Futureworld, based around themes of health and wellness. Ground was broken in February 1988. And on October 19, 1989, the Wonders of Life was born. This was a pavilion dedicated to physical fitness, the majesty of the human body, the biological life cycle, and what goes on inside your mind (long before Inside Out). And like anything with a biological life cycle, the Wonders of Life pavilion came to an end. But for any EPCOT enthusiast of a certain age, they can tell you that this was a truly wondrous place, where health and fitness came alive in a way that only Disney could manage.

There had always been plans for a “life and health” pavilion at EPCOT Center but it didn’t always look like Wonders of Life. By 1978 plans had been finalized. The building would be a circular building with outposts that held rides and attractions. A giant waterfall would greet guests as they entered, and once inside they would (in the words of an early promotional video) “experience a new awareness and appreciation of themselves.” There was a circus theme to the complex, called the Midway of Life, and other attractions that would jut out from that carnival-tinged hub. These attractions included the Incredible Journey Within, a dark ride where guests would “explore the incredible workings of the complex human machine.” Good Health Habits would be a “three-part animatronic fable” in a revolving theater like the Carousel of Progress. And a common entry would make room for two more attractions: Head Trip (featuring animatronic versions of emotion, intellect, and the nervous system) “humorously explaining the data handling and communication capabilities in all of us” and Tooth Follies, a musical, mouth-centered revue. There would be a sensory maze and a theater that would show The Joy of Life. An educational (but still fun) atmosphere would permeate the pavilion, showing guests that “good health is based on your own personal behaviors.” The planned pavilion was ambitious and huge.

Disney wanted to make sure the pavilion was as scientifically accurate as possible. Marty Sklar, then-President of Walt Disney Imagineering, told WD Eye Imagineering, an in-house magazine for Imagineers, in the inaugural issue (November 1989), that they did a lot of “testing the water.” They got people together for a major conference called Good Health in America (Sklar says it was “about 1976 or ’77”) and established an advisory board (members included Theodore Cooper, M.D., Phd., the Chairman and Chief Executive Office of the Upjohn Company and Director of the Heart Institute of National Institute of Health and Robert J. Haggerty, M.D., the President of the William T. Grant Foundation, a Professor of Pediatrics at Cornell and the Editor-in-Chief of Pediatrics in Review). The quest was hugely helpful. “One of the fascinating things about the subject is that in many ways, this is much more controversial than any other subject we have taken on, because theories about health care and how you manage your own body have changed a lot over the 14 years since we first started,” Sklar admitted. “We finally focused on one central theme, and that basically is: ‘Your role in managing your own body and your own health.’ Within that, through entertainment, we give great suggestions about the things that impact your health, whether it’s stress or exercise or smoking and involve you in a process of personal choice, rather than preaching.” Insurance giant MetLife eventually came on board to sponsor the sprawling pavilion. 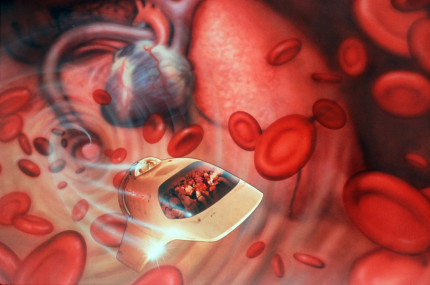 Another major breakthrough was the technological approach to the attractions. The Wonders of Life, as it was now known, had a centerpiece attraction that was similar to The Incredible Journey Within, except instead of a dark, ride-through attraction with a Peter Pan’s Flight-style ride system, it was a motion simulator not unlike Star Tours (based on the Star Wars films and recently opened at Disneyland; the Walt Disney World version wouldn’t open until December of 1989). The attraction, entitled Body Wars, was directed by Leonard Nimony (a man familiar with fantastic voyages), starred a young Elisabeth Shue and Tim Matheson and found guests being shrunk to microscopic size and injected into the human body. The film was shot on 70mm, with cutting edge effects and stop motion work completed by Industrial Light & Magic. There were four 26-ton ride vehicles that could seat (and then jostle) 40 guests.

“We started out to do a ride-through,” Sklar explained to WD Eye. “But we found that it was nearly impossible to move the huge set pieces. If you can think of moving a section of lung, for instance, that was 30 feet high, on a continuous basis as people ride through … you can imagine how ponderous and difficult that turned out to be. It wasn’t until we hit on the idea of using the simulator, as a result of the success of Star Tours, that this really became viable.” And viable it was. 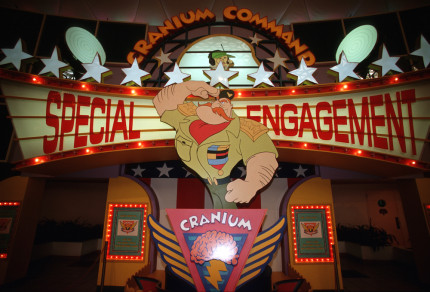 In addition to The Incredible Journey Within becoming Star Tours, the other signature attraction of the pavilion, The Head Trip, would become Cranium Command, housed inside a state-of-the-art, 200-seat theater. Instead of animatronic versions of emotion, intellect and the nervous system, Cranium Command would feature a single animatronic character (a young pilot named Buzzy, voiced by Corey Burton, who replaced a more macho Captain Cortex) and several screens where popular comedians and actors would inhabit characters like Left Brain (Charles Grodin) and Right Brain (Jon Lovitz). Dana Carvey and Kevin Nealon would reprise their Hans and Franz personas from Saturday Night Live to play the heart’s Right and Left Ventricles. In one of those weird coincidences, writer-director Pete Docter who would make the very Cranium Command-ish Inside Out, worked on Cranium Command.

When Wonders of Life finally opened on October 9, 1989, there would be a number of touchstones that would carry over from the early versions of the “life and health” pavilion to Wonders of Life. The basic layout of the pavilion, with a circular building (featuring a dome that was 250 feet wide and 65 feet high, making it the largest dome in EPCOT) and smaller additional buildings would remain, as would the futuristic carnival theming. (The pavilion actually consisted of four buildings, with the main dome, a ride wing, a main theater wing and a support wing.)

There would be three theaters towards the center of the building, Goofy About Health, which explained exercise and wellness in his typically bumbling fashion (told over several screens), a live comedy show featuring the Anacomical Players and The Making Of Me, a gloriously odd live action/animated short hosted by Martin Short that features the comedian traveling back in time to see how he was conceived (yes, it has shades of Back to the Future). Short played both himself and his father, and wonderful retro-style animation proved very eye-opening. 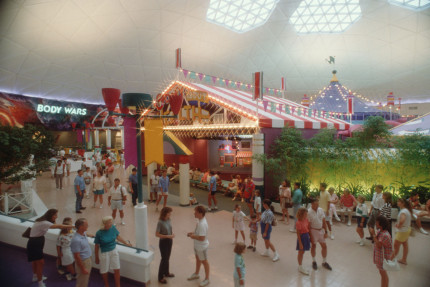 Elsewhere in the pavilion, interactive bikes (called Wondercycles) would allow you to choose virtual bike paths, shops would sell sporting supplies (Wells & Goods Lt.) and low-fat food (Pure and Simple). Frontiers of Medicine would present exhibits on “leading-edge developments in medicine and health sciences” and Coach’s Corner would have guests “have their tennis serve, golf or baseball swing analyzed and compared with a real sports pro’s, through the magic of instant replay.” And the Met Lifestyle Revue would allow guests to obtain a computer-generated analysis of their health habits.

This was a gorgeous pavilion, with a glittery golden sheen to the dome and a 76-foot tower called the Tower of Life (made of steel-and-carbon) that was modeled after the double helix of DNA, served as the grand entrance. Inside, the high tech circus theme was warm and effective, and like much of EPCOT Center at the time, carried a mood that was both futuristic and charmingly nostalgic.

For a while, the Wonders of Life flourished. A year after Body Wars opened, a half-a-minute was edited out of the ride film, during a section where the vehicle is caught in the body’s lungs (the seesawing back-and-forth motion was too intense for some riders, like our mother), and the large archway that initially greeted visitors was taken down and a new sign erected. (The pavilion was somewhat tucked away, at least by EPCOT Center standards, and sometimes easy to simply miss.) But it moved along, entertaining and educating guests. Sklar had predicted that the pavilion “will touch people more directly and more personally than any other subject at EPCOT Center.” The space educated and entertained visitors for fifteen years. After that, the Wonders of Life pavilion was opened seasonally between January 2004 and August 2007, when the entry signs and Tower of Life were quietly removed.

But as the life cycle kept on spinning, the Wonders of Life space has been used, semi-regularly, ever since, as the main hub for both the Epcot International Food & Wine Festival Presented by Chase and the Epcot International Flower & Garden Festival, where guests can take classes, listen to lectures and have a refreshing drink. Companies can also rent out the well-maintained space (and swank, circus-themed boardrooms). And Body Wars was instrumental when the company was redesigning its Star Tours attraction; this is where early versions of the new ride would be tested out, and parts from Body Wars were often used when the Star Tours vehicles needed some extra love. In a way, Wonders of Life would live on, giving itself up for other attractions and experiences that are still wowing guests today with the same blend of education and entertainment. 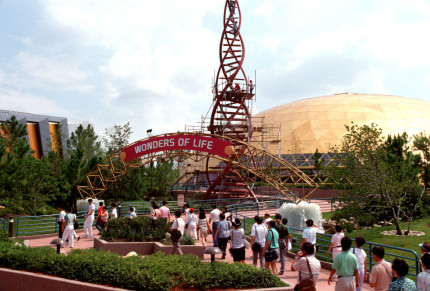 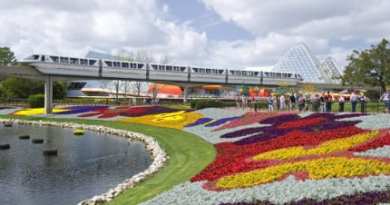 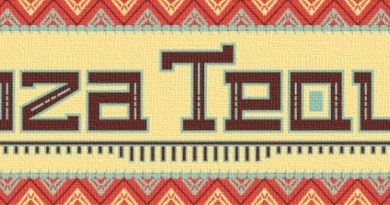 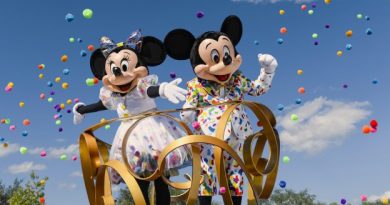 In True Disney Fashion, the Story of Trattoria al Forno at Disney’s BoardWalk

December 11, 2014April 16, 2020 Scott 0
The Main Street Mouse
%d bloggers like this:
We use cookies to ensure that we give you the best experience on our website. If you continue to use this site we will assume that you are happy with it.AcceptPrivacy Policy