I took my 7 year old daughter, Paige, on her first Disney vacation this past August. She has been a Disney Princess in her own mind ever since she was old enough to pretend. She would wear her “Princess Dresses” to school in Kindergarten. I picked her up from school one day to find her in tears because a classmate had the audacity to refer to her Rapunzel dress as a “costume”.

I have known for years that I was going to be the one to take Paige on her first Disney vacation and, as hard as it was, I wanted to wait until she was older. I wanted to make sure that she would be able to ride most of the rides, but more importantly, be old enough to remember the trip for years down the road. I also planned a few surprises for her during trip to help make her experiences magical and, in turn, her last in her memory forever.

I have to say, taking a child on her first visit to a Disney park was more than I expected it to be. I know as a man, I’m not supposed to do this, much less publicly admit it, but there were several times I had tears in my eyes watching her live the magic!

The first rise of my proud daddy emotions didn’t take long to surface. Our first day, we went to character breakfast at the Plaza Inn where she saw her favorite villain at the time, Captain Hook! After breakfast, we hustled over to Bibbidi Bobbidi Boutique (BBB) for her transition from my 7 year old daughter into the beautiful Princess Jasmine! Yes, I did get a little teary eyed when she waved her wand, said “Bibbidi Bobbidi Boo”, the curtains opened and she saw herself in the mirror for the first time! The expression on her face was priceless.

I had selected the Boutique’s Castle package, which came with a photo shoot. She was the perfect “model” since Paige has never been one to be camera shy. Once our photo shoot at BBB was completed, they took us over to Fantasy Faire to meet three princesses. What a special time that was as Paige was visibly very nervous when she saw Ariel waiting to meet her. The best part was when we got to Snow White, when she saw Paige’s BBB Magic Wand she asked to borrow it. She then proceeded to use the wand to make Paige dance and spin. Oh, how I wish I had been smart enough to capture that on video. 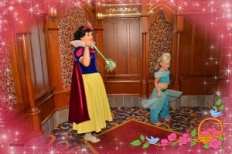 That night, we had dinner in Downtown Disney at Ralph Brennan’s Jazz Kitchen. We sat on their patio and I made Paige sit with her back to the entrance. About a half hour into dinner, Paige got her first major surprise of the trip—Grandma and Grandpa appeared behind her. She had been asking her grandparents for months to come with us and they always said they couldn’t afford the tickets, but would come if she paid for them. The whole time, we were planning on them flying in the day after we got there to surprise her. Just last night, Paige told me that memory of her grandparents surprising her at dinner has been “filed away in the never forget part” of her memory. She was so excited, she wanted to go back to the hotel with Grandma and Grandpa rather than go into the parks. We went to the hotel, swam in the pool and had an amazing view of the fireworks.

The first day at Disneyland, we didn’t get on many rides, as it was our “Meet and Greet” day. It was, however, probably one of the most memorable days we had and it was her first chance to finally experience the Happiest Place on Earth and it sure lived up to that!

The rest of the week was filled with wonderful, happy, magical moments. However, getting to enjoy the Disney experience through the eyes of a first timer was the most magical part of it all. There were some tears shed when she tried some rides and attractions that scared her, but she ended up going back and tackling those rides later in the week with just one or two exceptions.

The excitement she showed when Elsa and Anna each waved to her directly during the Frozen pre-parade are other moments from that week that I personally will never forget. Moments like that make every dime spent on the trip worth it!

There were many other magical moments throughout the week, a few more surprises brought out for her and several more character interactions, but the most memorable one came as we were entering Disneyland for the last time on Day 5. We had spent the first half of the day at California Adventure because Paige just “had to” ride the Radiator Springs Racers just one more time.

After we did what we needed to do in California Adventure, we headed over to Disneyland for our last visit there and to catch the attractions we had not yet been to.   Immediately after entering the park, I saw Cruella De Ville with a short line for a meet and greet. Paige had not seen 101 Dalmatians yet, so she had no idea what she was in for. While we were waiting, I quickly explained to Paige who Cruella was and I am glad I did.

When it was our turn, Cruella looked over at Paige and saw she was wearing her new Princess Anna shirt and quickly said “First things first! NO! I do not want to build a snowman and love is not an open door, it’s a closed kennel!” Everyone in earshot almost fell to the floor laughing-which seemed to upset Cruella a bit as she pronounced she “was dead serious!”

She spent about 10 minutes with Paige and we couldn’t stop laughing the entire time. After signing Paige’s autograph book, Cruella asked her if she wanted a picture and said “Let me take your leash so you don’t get lost” and grabbed her lanyard and held on. 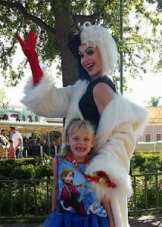 Finally, it was time to go and after the last picture was taken, Cruella flippantly said to Paige, “Well, I can’t miss you if you don’t leave, so, bye!” Paige immediately had a new favorite villain—although, I am not supposed to tell Captain Hook that as she doesn’t want to upset him. The first thing we did when we got home was watch 101 Dalmatians together!

The trip was magical. The trip was fun. The best part of the trip is I got to bond with my daughter during a week filled with one magical new experience after another.   A bond that could never be broken. And I got to visit a Disney park for the first time again myself—even if it was through a 7 year olds eyes! 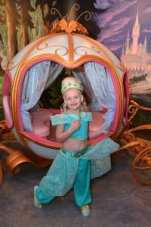 About Marc:
When Marc isn’t busy coaching soccer, cheering for Texas A&M, or hanging out with his awesome dog Lucy, he is busy talking Disney and enjoying time with his little Princess Paige. 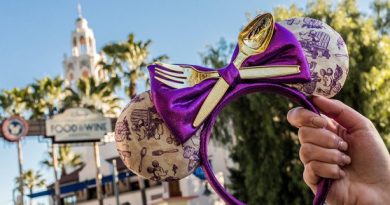 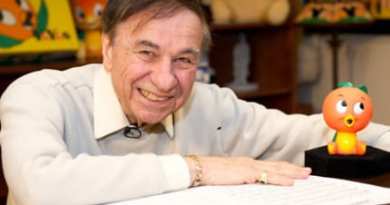 October 21, 2015April 16, 2020 Michele 0
The Main Street Mouse
%d bloggers like this:
We use cookies to ensure that we give you the best experience on our website. If you continue to use this site we will assume that you are happy with it.AcceptPrivacy Policy