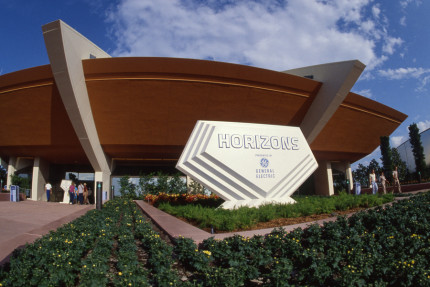 On October 1, 1983 EPCOT Center celebrated the 1st anniversary of it’s opening. It also brought along with the celebration one of the most beloved rides ever associated with Disney. A ride that a lot of people hold dear to their hearts then and now, and is also one of the most missed rides that has come and gone. I am talking ,of course, about Horizons. Horizons was the only attraction in Future World to showcase all of EPCOT’s Future World elements (communication, interaction, energy, transportation, anatomy, physiology) into one attraction and was located between World of Motion and the Universe of Energy. The Wonders of Life Pavilion became it’s neighbor in 1989.

My first experience with the ride was in July of 1983 when I was 6 years old. As a little boy looking at the building, I couldn’t help thinking how much it looked like a spaceship. Was this ride about extra-terrestrials, or about life forms different than our own? I must admit that I was intrigued. As we rode the ride, I was a little taken aback by what the ride was about. It wasn’t about E.T (which was one of my favorite movies then), but it was about what the future might look like. I remember smelling the oranges as we rode through the grove scene (an effect later used in Soarin”). I remember the theme song “New Horizons” like it was yesterday. It has been 12 long years since I last rode the ride, but since then websites have come along to where I can ride it once more.

So please sit back, relax and join me as we travel back to a time when EPCOT was called EPCOT Center, when Dreamfinder accompanied Figment, and Ellen and Bill Nye didn’t hang out with dinosaurs, because “Horizons 1 is now departing. Our final destination today: the 21st century.”

The History of Horizons

Those of you who are familiar with Tomorrowland know Walt Disney’s Carousel of Progress is an attraction that follows an American family through the 20th century as they live through the advent of electricity and other advances in technology. Horizons was proposed to be a sequel of sorts. It was to pick up with the same family a generation later with the parents now being grandparents, communicating with their children who are spread out all over the world and on into space, showing how they may live in the 21st century. Carousel’s theme song “There’s a Great Big Beautiful Tomorrow” was even part of the Looking Back at Tomorrow portion of Horizons. But the first concept was a little different than what we eventually got.

There were several working names for the pavilion early on. There was Century III and FutureProbe. Ned Landon, the GE rep on the Horizons Imagineering team said that FutureProbe wasn’t bad, but thought that it had a rather uncomfortable medical connotation. Ned was always comfortable with Horizons though, he said “There always is a horizon out there. If you try hard enough, you can get to where it is and when you do, you find there’s still another horizon to challenge you, and another beyond that.”

Although records show that the “idea germination” was in 1980, there was a first attempt at a concept in 1979 by George McGinnis, who was the project show designer for Horizons and Colin Campbell, who was another Disney Imagineer. General Electric
was the pavilion sponsor, who also sponsored The Carousel of Progress at the time. They presented GE chairman, Reginald Jones and Jack Welch (future CEO of GE) with the concept of the ride through focusing on Thomas Edison and his work along with the origins of GE. But Jones did not like the idea of having another history show, which Carousel pretty much was. He suggested to tell the story of GE’s current technologies.

Marc Nowadnick presented Jack Welch with a post show concept called “FutureFair.” It was going to be a “hands on” post show area that would have showcased GE’s range of businesses that as a conglomerate owned. But when the idea was presented Welch saw it as being too commercial, so the idea was omitted. After opening day, exit polls were showing that guests really enjoyed Horizons, but were having trouble making the connection between Horizons and GE that FutureFair would have provided. So one solution was to add GE’s logo throughout the ride on set pieces and place a lighted corridor leading to a large static electricity light bulb displaying GE’s logo.

The attraction used the Omnimover conveyance system that was used in such rides as Haunted Mansion, Journey into Imagination, and Spaceship Earth. But the Horizons Omnimover system is a little more notable. Why you may ask? It was the only attraction to use an inverted conveyance system. The ride vehicles did not rotate. They traveled sideways throughout the whole attraction to effectively place the viewer into the scene. The first full-size ride vehicle mockup built for testing was done by Gil Keppler and George McGinnis in just 13 hours.

The OmniSphere was a massive theatre that the ride vehicle rode past. Before the building design could be completed, the theatre had to be in position. The Omni-Max theatre was beneath the center of the pyramidal form of the pavilion. It was made up of two 8 stories tall and 8 stories wide Omni-Max screens. It was originally intended to be the big ending experience, but was used to tell the “Present” with all the amazing advances in science and technology. McGinnis originally designed the theatre to hold three screens, but had to cut one out due to budget restraints.

Imagineer Tom Fitzgerald was the main story writer as the Horizons project started. He added the warmth of the story to the models and designs of McGinnis’s small scale models. Tom asked McGinnis if his three children would like to pose for photos and sculpted as audio-animatronic figures for three of the scenes on the attraction. One is the little blonde toe tapper in the Undersea Classroom Scene. One of the boys has a seal attempting to lick his face, and his other son served as the model of the boy floating away from his family at the Omega Centauri’s arrival area.

Marty Sklar asked McGinnis to come up with a “weenie” (a term Walt came up with for something that draws your attention) for the ending, and the traveling screen concept was developed. It allowed four guests to “Choose their Future” by voting on touch panels in front of you. You are invited to choose your own flight path back to FuturePort, which is where you launched from. Majority ruled. All the passengers would make their decision and whichever got the most votes, a screen simulation of whichever flight path was chosen would show. The three choices were Space, Desert, or Undersea. Each one was 30 seconds long.

On September 30, 1993 GE’s contract to sponsor the attraction expired and within a few months, signs and dialogue mentioning GE were removed. Some ideas were tossed around about what to do with the pavilion. After upgrades and re-theming, the pavilion was to be turned into a space-theme pavilion in which the guest would be in individual space harnesses while viewing space stations and would be able to control the direction the ride turned. But it never came to be.

In late 1994 Horizons closed its doors to guests but not for good. It re-opened in december of 1995 by default because Universe of Energy and World of Motion were closed for refurbs. So if Horizons was closed, the only pavilion would have been the Wonders of Life pavilion on that side of Future World. January 9, 1999, Horizons closed permanently. No reason was given publicly, but there were several probabilities to why it closed. One was the lack of corporate sponsorship which probably played a large part. But the most accepted reason was a large sinkhole under the building along with structural problems. A large hole was visible at the back left of the building when the land was cleared. It’s said that the building was close to collapsing under it’s own weight. By September 10, 2000, the ground was completely clear and ready for preparation of a new pavilion, Mission: Space.

There are several references to Horizons throughout various theme parks. In Mission: Space, the center of the gravity wheel in the queue line, the Horizons attraction logo can be seen. There is also a version of it on the check out counter at the Cargo Bay, the Mission: Space gift shop. At Disney Hollywood Studios , a few of the props from the underwater city scene are displayed in one of the studio warehouses. When Space Mountain underwent a refurb in 2009, one of the bags in the post show area has “Mesa Verde” written on it. And located at the exit of Star Tours, at Tokyo Disneyland, is a kiosk featuring video of 3 other Star Tours excursions. Each tour advertised is the full 30 second sequence from the Horizon “Choose you Future” finale.
Even though old classics must sometimes come and go, they can and often do leave an everlasting impact on us. There will be other classics to come and go or be drastically changed but with today’s technology the memory of how they existed can be preserved.

Corey has 162 posts and counting. See all posts by Corey 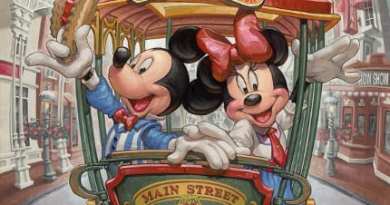 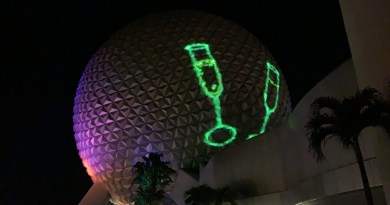 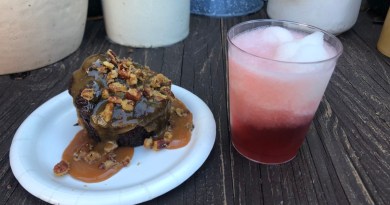 July 19, 2017July 19, 2017 Michele 0
The Main Street Mouse
%d bloggers like this:
We use cookies to ensure that we give you the best experience on our website. If you continue to use this site we will assume that you are happy with it.AcceptPrivacy Policy