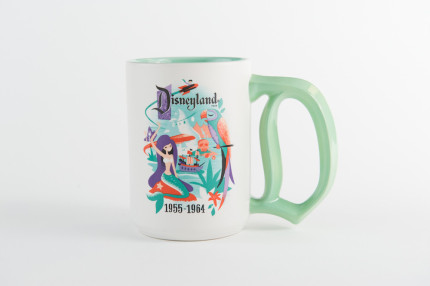 There is a lot of cool merchandise tied into the Diamond Celebration at Disneyland, honoring the 60th anniversary of the Park. But so far the coolest bit of merchandise is branded with newly created graphics celebrating the Disneyland Decades, with a unique graphic for each decade of the park. This means that, for instance, on the 1975 – 1984 poster, it features Big Thunder Mountain Railroad and Space Mountain, while the 1985 – 1994 poster (our personal favorite) has C-3PO (plus a Star Tours Starspeeder), Splash Mountain, the dragon from Fantasmic and Fuzzball from Captain EO. These graphics, which can be seen on T-shirts, coffee mugs, pins, and posters, are all highly collectible, limited edition items and they have every right to be—they’re beautifully designed, whimsical, highly stylized and capture the magic and nostalgia of each era of the park lovingly. When we first saw the Disneyland Decades designs at the Diamond Celebration preview event in Anaheim a few weeks ago, we instantly fell in love and simply had to chat with the person who designed them.

It turns out that person is Jeff Granito, a California graphic artist who has worked with Disney in the past, on everything from product lines to resort posters. But nothing could have prepared him for the ultimate assignment: creating a series of graphics for the Diamond Celebration. We were lucky enough to get to chat with Granito on the release of the first product line (celebrating the first decade of the Park) and we discussed the challenges of the project (like stretching six decades into eight designs), what his favorite graphic of the bunch is, and how he, in the spirit of hidden Mickeys, secreted a diamond into every design.

How did you come to this project?
They approached me about a year ago when they were doing work for the 60th. They had this concept for doing the Disneyland Decades and said, “We want 8 pieces of art and want to do decades and would you be interested?” Obviously I said yes. And I just went about doing concepts and worked out how there were six decades and eight pieces of art.

And how did you crack that?
The idea was that it would be released every two months because the celebration lasts 18 months. So I figured out that in that time period the holiday season comes up and there has been evolutions and changes, so I thought a holiday piece might be nice and then opening day, which is more about Walt to me than it is about the park, even though it’s about the park obviously, it’s a tribute to Walt that’s different than the park itself. [Editor’s note: This is a stunning black-and-white design that every Disney fan will be dying for.]

How do people get the special prints?
The opening day print is the going to be pretty much exclusive to D23 and the only way to get the merchandise in the parks is in a set with other items. They won’t be releasing that as its own collection in the parks.

Each print has a hidden icon, right?
It was the Diamond Celebration so while the diamond obviously doesn’t live in the decades, it was fun to stick that in there. So each one has a hidden diamond in there.

How did you decide the style and graphic approach for each decade?
They provided me a list of attractions by date. So I was given a list. Obviously not everything is going to go in there. So how I chose those and the art style, each piece speaks to its own decade. For instance, the first one is really the second one. The first one you have the whole park experience, dreaming it up, and that’s the black-and-white one. So even though the one coming out today is the first, it’s really the second. The next decade was really looking forward, so I have the perspective of Tomorrowland in the Park. It was really positive, all of the excitement and adventure that comes with a brand new Park. So the art style is taken from graphics from that decade.

Was it hard to figure out what to include in the graphics?
They gave me free reign. These were the most iconic, to me. I heard a comment today that they wanted the limo in the DCA version. Some things had gone away and some things that still exist. I didn’t need to do an inventory of everything that was gone. The Tiki Room is still really important today, so I tried to include things that made an impact beyond being a novelty of the time.

What was your relationship with Disneyland?
I grew up going to the parks. I worked with Disneyland for almost 20 years now. I’ve been involved in a lot of projects and a lot of that is reflected in my own art here. So yes I’m a Disneyland fanatic. That plays a lot into it as well. I grew up in a lot of these decades. I was there for most of them so of course my personal preferences came out too. My all-time favorite attraction is the Matterhorn.

How did you feel when you were approached to do this project?
I was honored just to be asked to do this. To have the opportunity to put my spin on 60 years of the park is really amazing. I really didn’t think that it was going to be presented as it is. It’s gained a life beyond what I expected. I really thought it was just going to be a t-shirt. I wasn’t expecting much out of it. It’s the 60th. It’s amazing. This is a tiny little piece of it. I’m overwhelmed by the response and the attention it’s gotten.

What’s your single favorite piece of merchandise?
I love the mugs. I wish I could say I had something to do with it. But I did the art and they put it on this fantastic mug. As a set, I would say the mug set is my favorite thing. The plates are really unique and they have an amazing border. But in terms of the art, the ‘80s is probably my favorite. I had season passes in the ‘80s. That speaks the most to me and my preferential style. If you look at the art it’s most similar to what I’d do on my own. I was born in 1970 so I spent that whole decade going to Disneyland. The ‘65 to ‘74 one is Mary Blair inspired and that’s what I remember as a little kid. Each one holds a little something for me. During the ‘90s, when it became a resort, I was working on merchandise there. I worked on merchandise for a lot of these attractions as they were being presented. When I started doing work with them that was before they had gotten rid of the parking lot [that would become Disney California Adventure].

What’s your favorite attraction that’s no longer there?
By far and away, it’s the skyway. I wish that was still there. It was all so symbiotic.

December 15, 2015April 16, 2020 Scott 0
The Main Street Mouse
%d bloggers like this:
We use cookies to ensure that we give you the best experience on our website. If you continue to use this site we will assume that you are happy with it.AcceptPrivacy Policy