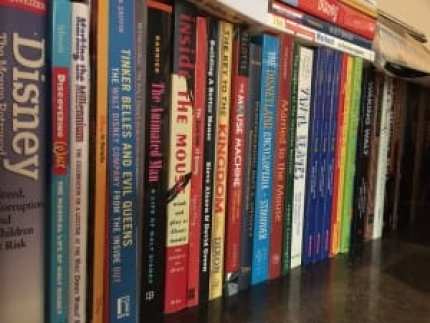 This week I decided to talk about one of my favorite Disney hobbies and that’s a good book about Disney. There are thousands upon thousands of books on the subject, anywhere from books about the parks, animators or the man himself, Walt. I only have a small collection of books and I’m always looking for a new one to read. So even out of books out there, I tried to whittle it down to my absolute favorite 10 that I own. This list could change at anytime as I add to my small but growing library. Hopefully this list will help you out if you’ve been looking for a new book and don’t know which ones you would like to check out. So here we go! 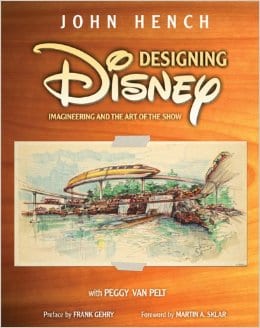 Most people have heard of the Imagineering legend John Hench and this book by him is a true delight. A must have for any park enthusiast.

“Designing Disney reveals the magic behind John’s great discoveries and documents his groundbreaking in several key areas: “Design Philosophy” examines the values, attitudes, aesthetics, and logic that went into the original concepts for Disney theme parks. In “The Art of the Show” and “The Art of Color,” Hench reveals the essence of what makes the parks work so well. And in “The Art of Character,” he lets the reader in on the how and why of the Disney characters’ inherent popularity-their timeless human traits, archetypal shape and gestures that suggest these qualities graphically, and their emotional resonance in our lives.” Barnes & Noble 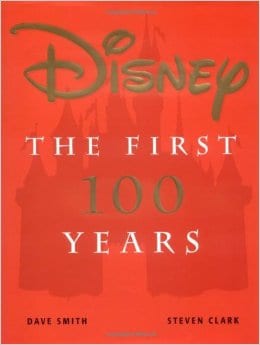 – Disney: The First 100 Years by Dave Smith and Steven Clark

The historian Dave Smith writes this book with probably just a small help from Steven Clark. Dave is a Disney Legend all to himself. This man is the absolute go to guy when it comes to anything about Disney.

“Celebrate the birth, development, and success of The Walt Disney Company year by magical year. Disney: The First 100 Years explores the Disney story — the story of a man, a family, and a company. You’ll meet the people who helped Walt make his dreams come true, see a museum’s worth of classic photos, and participate in the opening day of the most famous tourist attraction on the planet — Walt Disney World — plus just about every significant event in between. “ Barnes & Noble 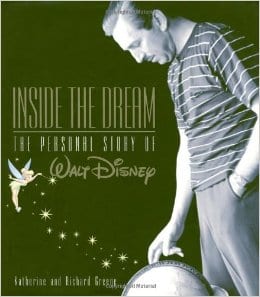 –Inside the Dream: The Personal Story of Walt Disney by Katherine & Richard Greene, Katherine Barrett

If you’re looking for the ultimate biography on Walt with stunning photos taken throughout his life, then look no further than this one.

“This timely biography, told through the captivating and vivid words of those who knew, and studied Walt Disney, provides the most revelatory portrait to date of the man who has become an icon of American culture. More than 70 men and women were interviewed, including friends, employees, and historians, adversaries and rivals, and, most especially, family members.” Barnes & Noble 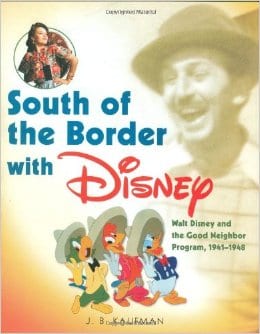 If you’ve ever wanted to know the reasons and story behind Disney and his contributions to the Good Neighbor program then this is the book you’ve boon looking for.

“Millions of viewers have enjoyed Saludos Amigos and The Three Caballeros without realizing that these Disney films were produced for a specific diplomatic purpose: as part of an initiative to foster a spirit of friendly hemispheric unity by countering Nazi propaganda efforts in South America, so that all the Americas might stand together against the Axis powers. This effort, the Good Neighbor program, was initiated and guided by Nelson Rockefeller as head of the Coordinator of Inter-American Affairs (CIAA), a new government post created by President Roosevelt in 1940. Beginning with the extraordinary research trip Disney undertook in 1941. Based on extraordinarily comprehensive archival research and richly illustrated with many images never before published, South of the Border with Disney is a fascinating study of an all-but-forgotten aspect of the American war effort that will inform and delight Disney fans, animation lovers, and World War II buffs everywhere.” Amazon 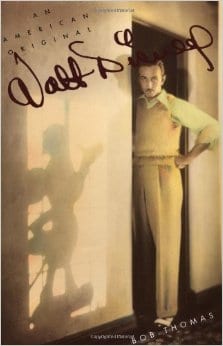 Probably hands down, (can’t tell me any different and I won’t listen if you tell me it’s not) the best biography on Walter Elias Disney. It’s the “official” biography and if there’s one book to own about Walt’s history, this is the one.

“Walt Disney is an American hero–the creator of Mickey Mouse, and a man who changed the face of American culture. After years of research, with the full cooperation of the Disney family and access to private papers and letters, Bob Thomas produced the definitive biography of the man behind the legend–the unschooled cartoonist from Kansas City who went bankrupt on his first movie venture but became the genius who produced unmatched works of animation. Complete with a rare collection of photographs, Bob Thomas’ biography is a fascinating and inspirational work that captures the spirit of Walt Disney.” Amazon

Come back next week when I’ll conclude my top 10 favorite books about Disney.

October 2, 2019April 14, 2020 Guest Blog 0
The Main Street Mouse
%d bloggers like this:
We use cookies to ensure that we give you the best experience on our website. If you continue to use this site we will assume that you are happy with it.AcceptPrivacy Policy