On Friday, the 88 second trailer of Star Wars Episode VII: The Force Awakens was released in 30 theaters around the US and also in iTunes.

As we know, the film takes place roughly 30 years after the events of Return of the Jedi.  Let’s go back a bit to remind people where we were with the Saga in 1983.  The Rebels had devised a plan to destroy the 2nd Death Star.  They knew the Emperor would be on the Death Star, so if they destroyed it like they did in A New Hope, it would deliver a crushing blow to the Empire. When the Rebels were presented with the plan, a small group would need to go to Endor to destroy the Shield Generator while others in ships were in position to blow up Death Star number 2.  Fast forward to the Rebel team led by Han on Endor.  While there Luke sensed Vader and believing he ruined the mission, he would surrender so the Rebels could carry out their mission and also use this time to talk to his Father and convince him to leave the Dark Side.

Unknown to the Rebels, The Emperor could sense the Rebels plan and has his forces on Endor to stop them.  One thing The Emperor didn’t see, the little fury creatures, the Ewoks would help the Rebels.  We all know what happened here, so back to the action on the Death Star.

Fast forward a bit to the point we see Vader taking his son Luke to his master, The Emperor in hopes of having Luke join the Dark Side.  Luke never had any intention of fighting his father again, he was there to try to convince him he was still good.  Of course a duel broke out and Luke had to defend himself as a Jedi should.  During the fight, Luke eventually began to become more powerful and then The Emperor taunted him telling him to use his anger and hate to win.  At this point Luke deactivated his saber and one activated it when Vader went to strike him.  Luke spoke to his father telling him he would not destroy his son as he didn’t when he had the chance on Bespin.  Vader told him he was wrong and the Dark Side was more powerful and that he would meet his destiny.  Vader threw his saber at Luke destroying the platform Luke was standing on.  While Vader came to the area Luke would have been in, Luke surrendered his weapon to Vader.  Now Vader was trying to located Luke, playing a game of hide and seek, Vader began to call out Luke, who was hiding in the shadows.  Vader sensed that Luke had a sister and said if he couldn’t turn Luke, perhaps he could his sister.  This sent Luke into a rage that no one expected and he attacked his father with so much power that it could only be the Dark Side in him.  Blow after blow he struck his father, till he struck his fighting hand severing it off so Vader no longer held his saber.

Appearing that Vader had been defeated by the young Skywalker, the Emperor began to laugh and praise Luke on his rage.  Luke during this time saw his father’s hand now missing and then looked at his own hand he lost in Empire and realized he was on the verge of joining the Dark Side as the hate grew in him.  After getting his thoughts together and some deep breaths, Luke deactivated his saber and tossed it to the side and expressed he would never join the Dark Side, as he was a Jedi, like his father before him.

The Emperor than announced if he didn’t turn, he would die.  The Emperor crippled Luke with such force lightning that Luke was in pain.  It appeared that the Emperor wanted to torture Luke for his disobedience to not join the Dark Side.  During this time, Vader had regained himself and stood behind his master.  He watched his son suffering and heard his calls for his father to help him.  It was somewhere here, Darth Vader essentially died and Anakin Skywalker was back just in time to save his son.  As The Emperor was about to deliver the final blow to Luke and end him, Anakin grabbed his master and at this time, all the energy of the lightning went through Vader, exposing his body through his armour.  He then hurled his former master to what we assumed was his death, but unfortunately at this time Anakin had also succumbed to his own demise.  By destroying The Emperor, Anakin had fulfilled his prophecy and brought balance to the Force.

It was after this, Luke was trying to get his father to safey.  We know that Anakin asked for his mask to be removed so he could see his son before he passed.  Luke knew removing the mask would be certain death, but Anakin insisted he was dying regardless and wanted to see his son with his own eyes once before passing.  Once the mask was removed, Anakin told his son he was right all along about his father and also thanked him.  It’s then that Vader passes.  Luke then must excape the Death Star before it was no more as he knew the Rebel forces were still coming.

We then see Lando and Wedge deliver the shots that would destroy the Death Star.  We then know, every planet celebrated the demise of the Empire.  Next we see Luke lighting a fire to burn his father’s armour and in turn ending Darth Vader as we know it.  After watching the Ewoks and Rebels celebrate their win.  Luke returns to hugs from his sister and Han amongst others.  Then in a moment Luke is looking out into the wooded area and he see’s his masters in Yoda and Obi-Wan and another Luke learned from, his father, Anakin Skywalker.

After 30+ years, Star Wars: The Force Awakens trailer debuted.  I loved the trailer and very impressed.  It appears JJ captured the feel of the original trilogy, which is what the fans wanted.  When Disney took over Lucasfilm just about 2 years ago.  They made a lot of promises that included bringing new life to the franchise.  Fans were nervous about what we would get.  I believe after this trailer, a lot of those nervous feelings maybe gone.  The trailer, to me, gave a feel for the original trilogy.

It opens up on Tattoine, which is where we first met Luke in 1977.  We hear the words “”There has been an awakening…”. Then we see someone in a Stormtrooper uniform, played by John Boyega, minus his helmet, appearing to either be running away or possibly waking up or recovering from something and wondering where to go.  Next we see a socceer ball droid rolling past what appears to be Pod racers, which gives a nod to The Phantom Menace.  Next, we see pictures of the newly designed Stormtroopers, and they look sharp.  This just proves, the Empire didn’t die after Jedi, but who is in charge?  The Master and Apprentice both appeared to die at the end of Jedi, so who took over the reigns?

Next we see Daisy Ridley, not sure what role she plays but appears to be a scanvenger and riding a sweet looking speeder of some sort. One thing I noticed in this scene, and many others was what appears to be a Lightsaber hilt on the side of the speeder.  In case you missed it, here is the still:

Next we see an X-Wing pilot flying and then see some other X-Wings flying over water, that tells us its not over Tattoine as there is no water that we know of there.  So this could be a new planet or maybe even Naboo, time will tell.

The next scene and one I watched over and over, looking for some hint was where we see what appears to be the new Sith villain.  His lightsaber is what they call a Crossguard lightsaber from the Extended Universe.  Who this Sith is and who his master is still remains a mystery.  Hopefully the next trailer will give us more explanation.

The part of the trailer that really got me though, when you see the Millenium Falcon appear.  We see it flying around, dodging Tie Fighters and then it comes across the screen.  The Falcon has always been one of my favorite ships and to see it in trailer, brought back the nostalgia of the original films.  I had always hoped we would have gotten to see the Falcon in the prequels, but no such luck.

I can still remember sitting in the theater, waiting for Revenge of the Sith to begin and then the music started and I must admit, I thought this was it.  This is the final movie of the Star Wars Universe.  Forward to the trailer yesterday, after the Falcon scene.  We then see Star Wars logo and the theme song begins to play, and at that moment I realized, the Saga continues and I’m very excited about the future of this franchise.

In case you missed the trailer, or just want to see it again, here you go: 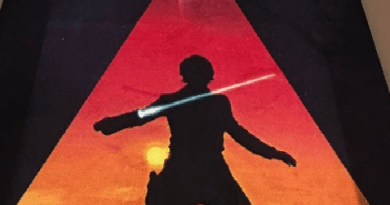 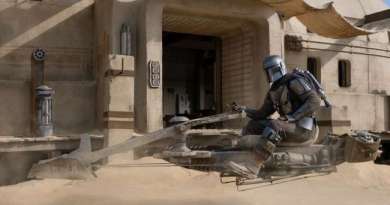 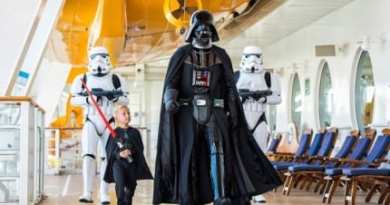 Music and Disney By John Leever

July 16, 2017April 16, 2020 Scott 0
The Main Street Mouse
%d bloggers like this:
We use cookies to ensure that we give you the best experience on our website. If you continue to use this site we will assume that you are happy with it.AcceptPrivacy Policy