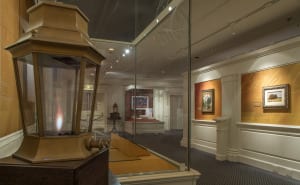 Located between Italy and Japan in the World Showcase stands the host pavilion The American Adventure. This is by far (in my opinion) the best pavilion there is. I know some people are like, “But there is no fancy sit down restaurant to eat at here.” I know that and agree 100% with those of you say that and we do pass by the Liberty Inn eatery almost every trip. But between the Voices of Liberty singers and The American Adventure show, this pavilion can’t be beat. I guess it’s the sense of American pride instilled in my bones from birth. So keeping with the theme of the World Showcase pavilion histories, sit back and enjoy this months article on The American Adventure.

Directly across from the amphitheater is The American Adventure Pavilion. The building is a 108,000 square foot Georgian styled mansion. Here is a good example of Disney’s use of forced perspective to make building appear larger or smaller than they actually are. The pavilion appears to only be two stories but in reality it’s five. In the time period the building is modeled after there were not five story buildings. Disney also decided to use actual bricks to build the pavilion. It is made up of 110,000 hand made Georgian clay bricks colored and aged to match the time period. Independence Hall, Boston’s Old State House, Monticello, and Colonial Williamsburg inspired elements in the building. Everything in the building evokes patriotism. The outside of the building has the red Georgian clay bricks, the white painted trim and the blue slate roof.

Leaving the lobby area and walking to the main theatre you’ll see what’s called the Hall of Flags. Here you’ll see a collection of flags that have flown in the U.S. including Revolutionary War flags and Colonial flags. In total there are 44 flags in all. Now it is time to enter the American Adventure theatre. The theatre seats a little over 1,000 guests and there’s not a bad seat in the house. The show is a mixture of film, audio-animatronics, and music and last 28 minutes in length. The two guides that takes you through the journey of America is no other than Ben Franklin and Mark Twain. Scenes include everything from the pilgrims coming to America to present time. And I think that given such a relatively short time to give a history lesson, Imagineers did a pretty good job touching on important parts of the past. There are a total of 35 audio-animatronics used during the show. The show also focuses on the Declaration, slavery and the Civil War, and the founding of Yosemite and other National Parks. The show closes with the “Golden Dreams” film montage.

The technical aspect of the show is just as impressive as the show itself. Backstage the mammoth device used to rotate the scenes measures 65 by 35 by 14 feet and weighs a measly 175 tons. It’s a computer-controlled device that’s nicknamed “The War Machine”.

-The audio-animatronics wigs are made from real human hair

-During the “Brother Can You Spare a Dime” portion you’ll see a sign for American Express and Coca-Cola. If I knew any better I would say that these two are sponsors for the pavilion

-Some of the furniture and set pieces used throughout the show are not replicas. They are antique pieces from those time periods.

Corey has 168 posts and counting. See all posts by Corey 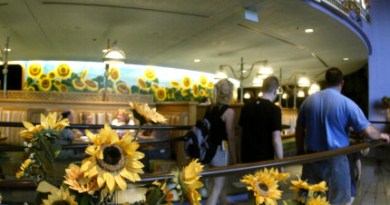 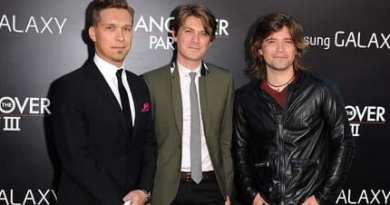 Eat To The Beat Concert Series at Epcot: Hanson 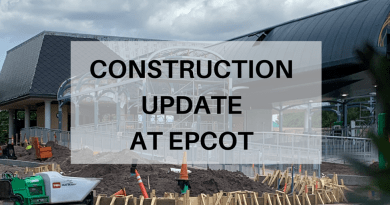 January 27, 2017April 15, 2020 Michele 0
The Main Street Mouse
%d bloggers like this:
We use cookies to ensure that we give you the best experience on our website. If you continue to use this site we will assume that you are happy with it.AcceptPrivacy Policy