Recently I was sent The Legacy Collection for the blockbuster Disney film Mary Poppins, from Walt Disney Records to review.  I was excited when I was first told I would be getting the CD to review.  Having known that the Sherman Brothers did the music for the film, I was excited to have a set that would feature that.  What I hadn’t realized is there was actually 3 different CD’s in the collection and each was wonderful in its own way. 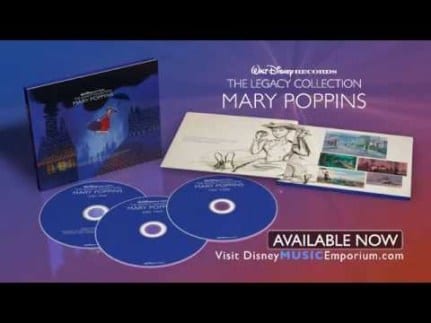 Here is Walt Disney Record’s description of this particular collection:

As I was reviewing the content of the CD’s, the first one contains the actual film versions of the movie soundtrack.  The quality is amazing, sounds like they were just recently made.  Hearing the songs so clear from Julie Andrews, Dick Van Dyke and all the other fantastic artists was great.  Listening to each song, I imagined the scene from the film.  It’s a great way to relive the film from memory.

The 2nd CD is by far my absolute favorite.  First you get the actual demo recordings done by the Sherman Brothers themselves.  It’s awesome to actually hear them singing and playing the songs that we are use to hearing from the stars of the films.  The Lost Cords are also included and allows us to hear some of the songs that were intended for the film, but didn’t make it for one reason or another.  The creators of this collection, also collaborated with Richard Sherman to record 7 of the songs today with a full orchestra so we could hear what they would have sounded like, had they made it to the film. 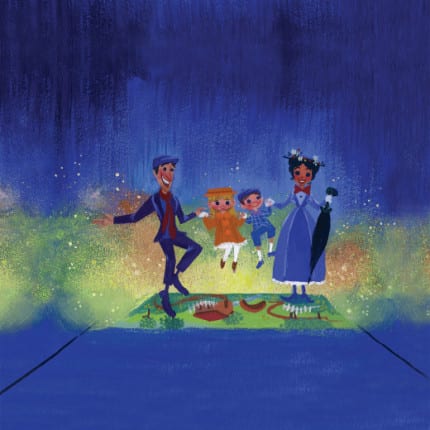 The third CD, “The Legacy Collection” includes over 40 minutes of excerpts from the seminal story meetings between Mary Poppins author P.L. Travers, the Sherman brothers and screenwriter Don DaGradi as they discussed the original outline for the movie, including the music. These excerpts are incredible to listen to once you realize who is speaking.  In the film, Saving Mr. Banks, we were shown the recreations of these moments in Disney history, but now you can actually hear what the discussions entailed at the time they happened.

Also on the third CD, they have included 17-minutes of Hollywood Spotlight Microphone interview with the stars of the film Julie Andrews and Dick Van Dyke.  We also get interviews from the Sherman brothers and Irwin Kostal (who arranged the music for Mary Poppins). The final part of the third disc ends with a interview from 1989 with Richard and Robert Sherman discussing their work in creating the music for Mary Poppins.

The CD cover and booklet, contains newly created artowrk inspired by Mary Poppins from artist Lorelay Bove.  Lorelay Bove is a visual development artist at Walt Disney Animation Studios.  She has worked on films such as Tangled, Winnie the Pooh, and Wreck-It Ralph to name a few.  In addition to Lorelay’s art, the booklet includes a sampling of the visual development art from the film and the sketches from the story meetings with P.L. Travers herself.

For any fan of Mary Poppins this CD collection is a must have.  I’m already a huge fan of the Sherman Brothers work, so this is definately something I’m proud to have in my Disney collection now.  To actually hear the writers singing the songs and the other ideas they had for the music is absolutely great.  I kept sitting there thinking, this is what Walt was hearing. This is how they would have performed the music for him.  Just for that moment, I could feel the history I was listening to.

If you would like to get this collection, go to the Disney Music Emporium and order your CD’s now.  You won’t regret this purchase.

Next week I will be reviewing The Legacy Collection for The Lion King and I’m sure I won’t be disappointed. 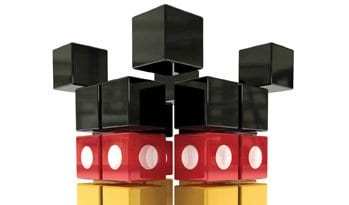 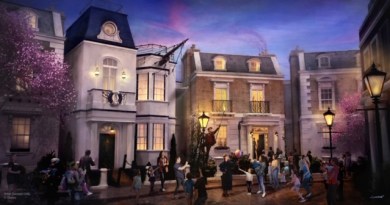 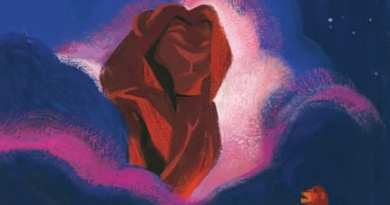 Exclusive New Art from The Legacy Collection: The Lion King

April 23, 2018April 16, 2020 Guest Blog
The Main Street Mouse
%d bloggers like this:
We use cookies to ensure that we give you the best experience on our website. If you continue to use this site we will assume that you are happy with it.AcceptPrivacy Policy