Fans of the Marvel Universe are really looking forward to Guardians of the Galaxy that will hit theaters in August 1st.  Unless you are a comic book reader or have done some research you probably know very little if anything about Peter Quill the Guadians Leader.  Here is a blog that Marvel themselves put out in regards to the history of the character. 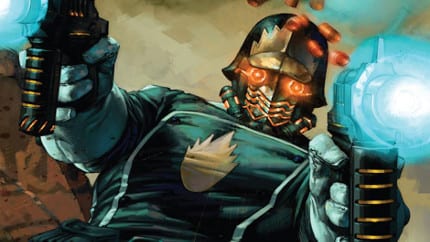 Peter Quill might just be having the biggest year of his existence.

With a huge part to play in a major motion picture hitting theaters later this summer, the Guardians of the Galaxy front man will soon be rubbing metaphorical elbows with the heavy hitters of the Marvel Cinematic Universe. In almost 40 years, Star-Lord has gone from being one of Marvel’s forgotten characters of a bygone era to a nearly ubiquitous presence appearing in titles like GUARDIANS OF THE GALAXY, CAPTAIN MARVEL, ALL-NEW X-MEN, and IRON MAN.

Pretty soon Peter Quill will enter a bold new era as the leading man of his own ongoing series. With writer Sam Humphries and artist Paco Medina steering the ship, LEGENDARY STAR-LORD will launch the titular hero out of his comfort zone and into a whole new galaxy of adventure. But for those of you who aren’t familiar with Star-Lord, have no fear; we’ve compiled a quick reading list comprised of the issues you can read before picking up the new cosmic comic this July.

Peter Quill first appeared in 1976 in the pages of MARVEL PREVIEW, a black and white anthology magazine filled with tales set far beyond the borders of the known Marvel Universe. His earliest appearances found their way into STAR-LORD: THE HOLLOW CROWN. The brash hero’s intergalactic origin story recently received a modern update in the pages of GUARDIANS OF THE GALAXY (2013) #0.1.

After a handful of other cosmic capers in the late ’70’s, recently reprinted in volumes titled TEARS FOR HEAVEN and WORLDS ON THE BRINK, Quill resurfaced as a depressed and defeated prisoner inside an intergalactic jail called the Kyln. The ex-Star-Lord’s stay got cut short, though, when the Kyln got caught up in a war between Galactus and one of his former heralds. The Shi’ar warrior called Gladiator drafted Peter into his service, thus shaking the former adventurer out of his funk.

Quill wasted no time making himself a major player in the cosmic landscape. Immediately after siding with the Shi’ar, the still-not-comfortable-calling-himself-Star-Lord found himself positioned as the right hand man to the last surviving Nova corpsman, Richard Rider. Quill played down his responsibilities by cracking jokes and calling his boss “Richie,” but he still couldn’t sway people from seeing the hero inside of him as he bravely joined the fight against the conquering Annihilus’ Annihilation Wave.

Following a catastrophic attack on the Kree Empire by the Phalanx, Peter found himself closer to death than ever before. Kree scientists rescued him and placed him in charge of a band of misfits. Quill finally took up the name Star-Lord again as he charged into battle with the Phalanx alongside new allies like Rocket Raccoon and Groot.

With the galaxy still reeling from back-to-back wars with Annihilus and the Phalanx, Star-Lord took it upon himself to form a proactive team designed for stopping threats before they get out of hand. He added brawlers like Drax and Gamora to his team, as well as powerhouses like Adam Warlock and Phyla-Vell. After much deliberation, the ragtag team eventually settled on a name: the Guardians of the Galaxy.

In case you missed it, here is the latest trailer that Marvel put out just yesterday.

Scott has 3489 posts and counting. See all posts by Scott

Awesome Eats for “Guardians of the Galaxy –Awesome Mix Live!” Returning to Epcot this Summer

July 10, 2016April 16, 2020 Michele 0
Do NOT follow this link or you will be banned from the site!
We use cookies to ensure that we give you the best experience on our website. If you continue to use this site we will assume that you are happy with it.AcceptPrivacy Policy