On this day, in 2002 President George W. Bush had a movie night at the White House.  He invited Actor Dennis Quaid, Disney Chairman Michael Eisner, and Director John Lee Hancock for a screening of the Disney movie, The Rookie. 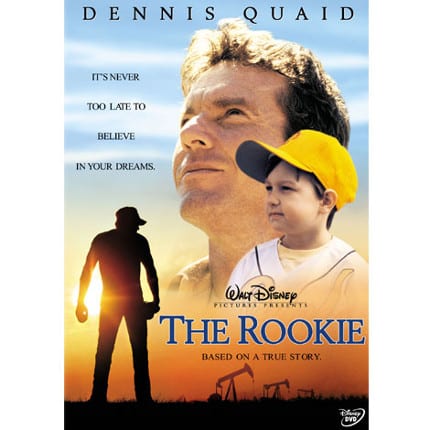 The Rookie, is a movie based on the true-life tale of Jim Morris, a 35 year-old science teacher who became one of the oldest rookies in the major leagues as a baseball pitcher.  Jim is the son of a career Navy man, who has to move his family to a small town in Texas when Jim is younger.  Unfortunately Jim’s father never approved of his dream to play Major League Baseball and never helped him with his dream.  Not only did his father not support his dream, but the town they moved to didn’t care for baseball much either and he wasn’t even able to play in high school.  He did get drafted by the Milwaukee Brewers, but tore his shoulder and ending his dream

Jim, in 1999, is married with 3 kids and a science teacher and baseball coach where he attended high school.  His team learns he can still throw hard and fast and they make a deal with the coach if they win their district, Coach Morris has to try out for the majors.  Well the team does win their district and in keeping his promise, Jim Morris tries out for the Tampa Bay Devil Rays.

Jim attends a tryout nearby for the Tampa Bay Devil Rays and with his children in tow, goes out and throws for the scouts.  After his tryout, Jim is told that his fastball is a staggering 98 mph, which is abnormally higher than it was in his younger years.  To make a long story short, he gets a shot and goes to pitch for one of Tampa Bay’s minor league teams.

As I’m sure you can guess, he does eventually get to go to the Majors and pitch.  This is where you can insert President Bush wanting to show the film.  It’s no secret, President Bush is a huge Baseball fan.  He even at one time was a partner in owning the Texas Rangers Major League team.  When Jim Morris got called up to pitch for the Devil Rays in his first game, the Rays were actually playing the Texas Rangers in Arlington Texas.  President Bush was a big part of the stadium being built in Arlington and being a lifelong fan of the Rangers this created his interest in the film.

If you haven’t seen the film, The Rookie, I highly recommend you do.  The story is really good, even if you are not a sports fan you will enjoy this film.  When you finally see Jim Morris achieve his dream and the look on his family, including his father’s face, you see that they are so proud of him and his accomplishment.  Jim Morris had a very short MLB career having pitched that first game on Sept 18, 1999 and his final game on May 9, 2000.  He only pitched in 21 games over that time, but he and his story are an inspiration to anyone with a dream they want to fulfill.  No matter your age, you can always strive to make your dream a reality.  Walt chased all his dreams and encouraged all around him to do the same.

CONTEST WINNER – ‘Twas the Night Before Meet Up

Photos from the set of “Disenchanted” are here!

March 30, 2022March 30, 2022 Michele
The Main Street Mouse
%d bloggers like this:
We use cookies to ensure that we give you the best experience on our website. If you continue to use this site we will assume that you are happy with it.AcceptPrivacy Policy