“Marvel’s Agents of S.H.I.E.L.D.” has recruited yet another special guest star with fan-favorite actor/comedian Patton Oswalt, who will join the cast as Agent Eric Koenig in an upcoming episode of the hit series. 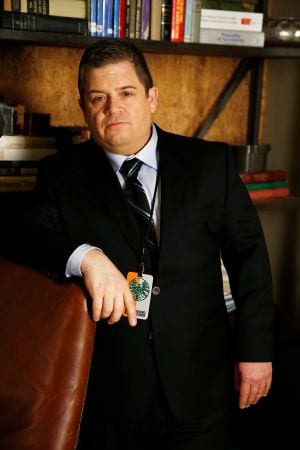 Koenig, who first appeared in SGT. FURY AND HIS HOWLING COMMANDOS #27, was a part of Fury’s original team of World War II soldiers in the comics. Oswalt, perhaps best known for his roles in “King of Queens,” “Ratatouille” and countless other films and TV series, came onto “Marvel’s Agents of S.H.I.E.L.D.” in perhaps the most straightforward way possible—he was simply asked.

“I got a call from my agent saying they want you on Marvel’s Agents of S.H.I.E.L.D., and I said ‘hell, yes,’” recounts the actor. “I’m lucky that I’m visible enough that they wanted to bring me in to play this character. I’d worked with [‘Marvel’s Agents of S.H.I.E.L.D.’ Executive Producer] Joss [Whedon] before on ‘Dollhouse,’ and I guess I wasn’t too annoying and they decided to put me on another one of his shows. So I was very lucky.”

Once he got the part, Oswalt instantly launched into some research—though perhaps not for the reason some might suspect. As a fan of the series, Oswalt has been asking the question many have posed, namely “Who is the Clairvoyant?”

“When they first told me the character’s name, I’ll admit the first thing I did is I went on Wikipedia and looked up the M.O.D.O.K. character to see if Koenig was maybe his name before he became M.O.D.O.K., but it wasn’t,” laughs Oswalt. “They keep on talking about the Clairvoyant in the show and I’m like, ‘is that M.O.D.O.K.? Am I M.O.D.O.K.?”

One thing the actor has always loved about the series even before his guest appearance was how it allowed the creators to explore the more overlooked corners of the Marvel Cinematic Universe, corners which are nonetheless very important to the big picture.

“[They’re] a scrappy bunch of agents who are sort of working on the lower tier levels of the Marvel Universe and trying to stop threats before they even get to the Avengers-level threats,” explains the actor. “It’s almost like when you watch ‘The Wire,’ and the guys like Pryzbylewski are just chasing the paper trail but that’s kind of the whole case. That’s where they can bring these guys down, is they’re doing the kind of brutal grunt work. There are these people doing the day to day that keeps the world from spinning into chaos. [They say,] ‘no, we don’t have the shiny Tony Stark, Hawkeye, Black Widow stuff, but we are in it up to our necks and we’re doing it. I really like that. There’s a great sense of camaraderie.”

As the series has progressed and introduced more elements from the Marvel comics such as Deathlok, John Garrett, Sif, Lorelei, or Eric Koenig himself, Oswalt feels the creators have remained incredibly faithful to their source material—and he couldn’t be happier to see one character in particular debut.

“They introduced Agent Garrett, who’s one of my favorite Marvel characters, and I kept asking them on the set, ‘is he going to be an android [like in the comics]?’” says Oswalt. “They’re just like, ‘you’ll have to wait and see.’ They clearly have plans. This is not the mid-‘90s anymore where they just handed comic book properties to anybody, they’re thinking I’m making a comic book [TV series] in this awesome universe and I don’t want to mess it up. And that’s a different motivation than what was happening in the ‘90s, and that’s real cool. I’m glad that changed, that they’re giving them to guys that welcome the tension of, ‘how do I make popular entertainment that still acknowledges this big fanbase that cares about this universe? And if I’m going to change things, can I do it in a way that makes them go oh wow?’”

Oswalt also feels the tone of the series has begun to shift.

“They’re using the Jonathan Hickman model of wheels-within-wheels,” explains Oswalt. “It’s getting into that John Le Carre, ‘Tinker, Tailor, Soldier, Spy’ world now, which creates even more tension because you don’t know, is someone lying to me, and are they doing me a favor by lying to me? That’s really great stuff to play as an actor.”

When Oswalt walked onto the soundstages for “Marvel’s Agents of S.H.I.E.L.D.,” one thing in particular impressed him instantly.

“For a TV show, the practical sets that they built are more elaborate and more of a 360 sandbox environment than a lot of movie sets that I’ve been on, and that really blew me away,” recalls the actor. “You could do almost West Wing walk and talk sequences on set. I was like, this is the set for a very brief arc of the show, and the level of detail that went into it was pretty stunning.”

Finally, as a fan of not only the series but all things Marvel, Oswalt’s experience on the show did have one slightly bittersweet component to it.

“When you’re in something, now you know what’s coming. A big part of me is still a big consumer of this stuff. I have friends now that write some of the comics, and they’ll send me issues, [but] I like having to wait until every Wednesday and get it once a month. That’s sort of part of the story for me. It’s that push-pull of, I want to know stuff now, but I also like the waiting is part of the fun. [Marvel’s] doing so much stuff [though], and now with the Netflix [deal], there’s always going to be enough to wait for and rub my hands together for. That will never be a problem.”

Scott has 3489 posts and counting. See all posts by Scott

April 19, 2016April 9, 2020 Michele 0
Do NOT follow this link or you will be banned from the site!
We use cookies to ensure that we give you the best experience on our website. If you continue to use this site we will assume that you are happy with it.AcceptPrivacy Policy