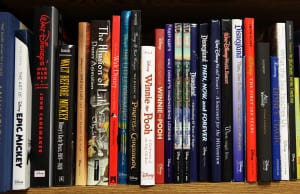 This week I decided to talk about one of my favorite Disney hobbies and that’s a good book about Disney. There are thousands upon thousands of books on the subject, anywhere from books about the parks, animators or the man himself, Walt.  I only have a small collection of books (over 200 to be exact, I counted) and I’m always looking for a new one to read.  So even out of 200+ books I tried to whittle it down to my absolute favorite 10 that I own. This list could change at anytime as I add to my small but growing library.  Hopefully this list will help you out if you’ve been looking for a new book and don’t know which ones you would like to check out. So here we go! 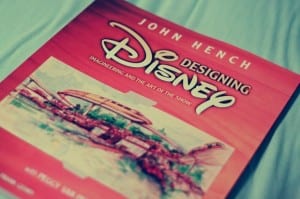 Most people have heard of the Imagineering legend John Hench and this book by him is a true delight.  A must have for any park enthusiast.

“Designing Disney reveals the magic behind John’s great discoveries and documents his groundbreaking in several key areas: “Design Philosophy” examines the values, attitudes, aesthetics, and logic that went into the original concepts for Disney theme parks. In “The Art of the Show” and “The Art of Color,” Hench reveals the essence of what makes the parks work so well. And in “The Art of Character,” he lets the reader in on the how and why of the Disney characters’ inherent popularity-their timeless human traits, archetypal shape and gestures that suggest these qualities graphically, and their emotional resonance in our lives.” Barnes & Noble 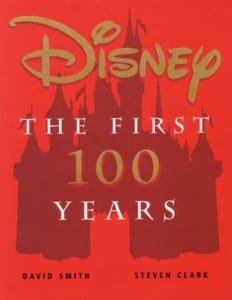 – Disney: The First 100 Years by Dave Smith and Steven Clark

The historian Dave Smith writes this book with probably just a small help from Steven Clark.  Dave is a Disney Legend all to himself.  This man is the absolute go to guy when it comes to anything about Disney.

“Celebrate the birth, development, and success of The Walt Disney Company year by magical year. Disney: The First 100 Years explores the Disney story — the story of a man, a family, and a company. You’ll meet the people who helped Walt make his dreams come true, see a museum’s worth of classic photos, and participate in the opening day of the most famous tourist attraction on the planet — Walt Disney World — plus just about every significant event in between. “ Barnes & Noble 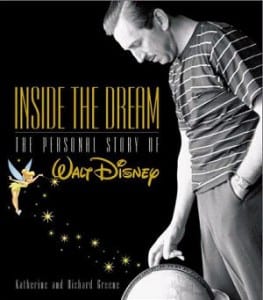 –Inside the Dream: The Personal Story of Walt Disney by Katherine & Richard Greene, Katherine Barrett

If you’re looking for the ultimate biography on Walt with stunning photos taken throughout his life, then look no further than this one.

“This timely biography, told through the captivating and vivid words of those who knew, and studied Walt Disney, provides the most revelatory portrait to date of the man who has become an icon of American culture. More than 70 men and women were interviewed, including friends, employees, and historians, adversaries and rivals, and, most especially, family members.”  Barnes & Noble 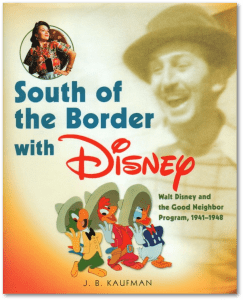 If you’ve ever wanted to know the reasons and story behind Disney and his contributions to the Good Neighbor program then this is the book you’ve boon looking for.

“Millions of viewers have enjoyed Saludos Amigos and The Three Caballeros without realizing that these Disney films were produced for a specific diplomatic purpose: as part of an initiative to foster a spirit of friendly hemispheric unity by countering Nazi propaganda efforts in South America, so that all the Americas might stand together against the Axis powers. This effort, the Good Neighbor program, was initiated and guided by Nelson Rockefeller as head of the Coordinator of Inter-American Affairs (CIAA), a new government post created by President Roosevelt in 1940. Beginning with the extraordinary research trip Disney undertook in 1941.  Based on extraordinarily comprehensive archival research and richly illustrated with many images never before published, South of the Border with Disney is a fascinating study of an all-but-forgotten aspect of the American war effort that will inform and delight Disney fans, animation lovers, and World War II buffs everywhere.” Amazon 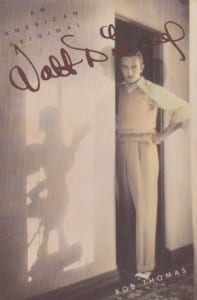 Probably hands down, (can’t tell me any different and I won’t listen if you tell me it’s not) the best biography on Walter Elias Disney.  It’s the “official” biography and if there’s one book to own about Walt’s history, this is the one.

“Walt Disney is an American hero–the creator of Mickey Mouse, and a man who changed the face of American culture. After years of research, with the full cooperation of the Disney family and access to private papers and letters, Bob Thomas produced the definitive biography of the man behind the legend–the unschooled cartoonist from Kansas City who went bankrupt on his first movie venture but became the genius who produced unmatched works of animation. Complete with a rare collection of photographs, Bob Thomas’ biography is a fascinating and inspirational work that captures the spirit of Walt Disney.” Amazon 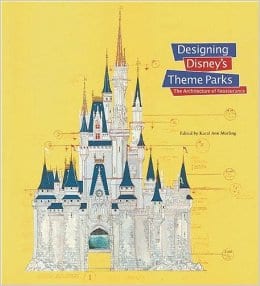 This book is pretty much a masterpiece in for any Disney Theme Park enthusiast.

“Uniting a roster of authors chosen from wide-ranging disciplines, this study is the first to examine the influence of Disneyland on both our built environment and our architectural imagination. Tracing the relationship of the Disney parks to their historical forebears, Designing Disney’s Theme Parks: The Architecture of Reassurance charts Disneyland’s evolution from one man’s personal dream to a multinational enterprise, a process in which the Disney “magic” has moved ever closer to the real world. This is a unique perspective on one of the great post-war American icons.” Barnes & Noble 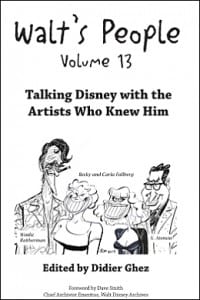 Walt’s People: Talking Disney with the People Who Knew Him by Didier Ghez

Not a single book but a series of 13, these books include some of the best-collected interviews with those who worked with Walt personally. 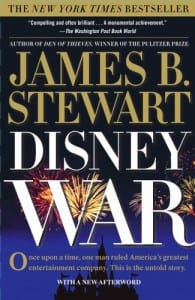 Disney War by James B. Stewart

This is the book to get if you want to read about the rise and fall of Michael Eisner within the Disney Company.

‘When you wish upon a star’, ‘Whistle While You Work’, ‘The Happiest Place on Earth’ – these are lyrics indelibly linked to Disney, one of the most admired and best-known companies in the world. So when Roy Disney, chairman of Disney animation, abruptly resigned in November 2003 and declared war on chairman and chief executive Michael Eisner, he sent shock waves throughout the world. DISNEYWAR is the dramatic inside story of what drove this iconic entertainment company to civil war, told by one of America’s most acclaimed journalists. Drawing on unprecedented access to both Eisner and Roy Disney, current and former Disney executives and board members, as well as hundreds of pages of never-before-seen letters and memos, James B. Stewart gets to the bottom of mysteries that have enveloped Disney for years. In riveting detail, Stewart also lays bare the creative process that lies at the heart of Disney. Even as the executive suite has been engulfed in turmoil, Disney has worked – and sometimes clashed – with a glittering array of Hollywood players, many of who tell their stories here for the first time.” Amazon 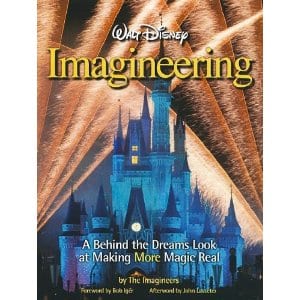 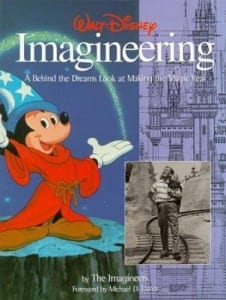 Walt Disney Imagineering: A behind the Dreams Look at Making the Magic Real by The Imagineers

These 2 books are jewels within themselves. They both include never before seen documents, photos and stories told by Imagineers.

“How can you make dreams come true? Or transform a fantasy into a colorful, exciting world that visitors can move through, touch, and enjoy? Such fabulous work is the daily business of Walt Disney’s Imagineers, a core group of creative and highly skilled professional wizards who combine imagination with engineering to create the reality of behind the dreams that comprise the Disney theme parks. In this sequel to the best-selling Walt Disney Imagineering: A Behind-the-Dreams Look at Making the Magic Real, the Imagineers serve up another dose of magic with an even closer look at who they are, what they do, and how they do it, illuminating their theories and explaining the tools they use, and where and how they use them. Contained within this deluxe tome are rough drawings, conceptual models, and behind-the-scenes stories showcasing Disney’s newest attractions and innovations from the inside out. There’s also an exclusive peek inside the Research and Development Lab to see what new magic will soon be appearing.  The Imagineers tell their own stories, as well as how they got there, what they do on a daily basis, what they show their friends in the parks, and how you can learn what it takes to become an Imagineer.  Presented in a large, lavish format, this book is sure to be a must-have for every Disney collector.” Barnes & Noble 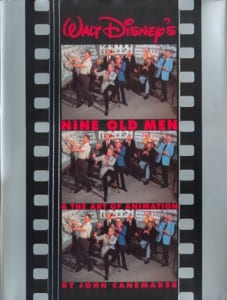 This is a pure treasure for Disney enthusiast. If there was anything you wanted to know about the 9 Old Men, then look no further than this book.

“Noted film historian John Canemaker brings to life the team whose combined individual genius defined the art of character animation. Think of your favorite moments and characters in Disney films from the thirties to the seventies and chances are most were animated by one of Walt Disney’s “Nine Old Men.” Through the span of their careers, these nine highly skilled animators exhibited an unparalleled loyalty to their employer. This book explores their artistic breakthroughs, failures, and rivalries, and their individual relationships with each other and with Walt.” Barnes & Noble

TMSM Meet Up Shirts! Time is Running Out!

May 21, 2017April 9, 2020 Guest Blog
The Main Street Mouse
%d bloggers like this:
We use cookies to ensure that we give you the best experience on our website. If you continue to use this site we will assume that you are happy with it.AcceptPrivacy Policy