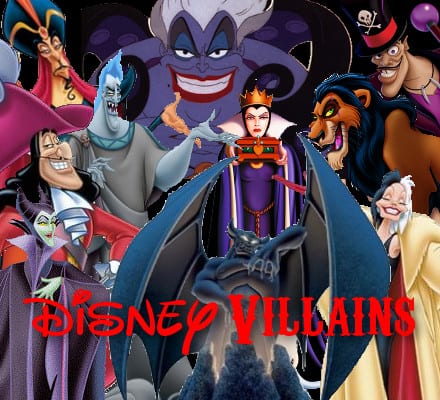 It’s the Halloween season, at this time of year we seem to look to the evil villains a little more. I’m sure they are evil every day of the year but we always talk about or see them more in October.  I decided to share my list of my top 10 Disney Villains.  First wanted to decide if the list should be any Disney Villain or just animated ones.   The live action villains like Davy Jones, Loki, Queen Larissa, and the Queen of Hearts are all evil. The actors who play these characters all did an amazing job and I’m sure Walt would be very happy with the portrayals.  The live actor villains are great, don’t get me wrong.  Well after much deliberation I decided to go with just the animated or stop motion villains.   I’m not saying the animated ones are better or worse,  I just wanted to stick with one particular type.   The characters can be from any film released by Disney owned property.   Pretty much as long as a live actor didn’t portray the villain on the screen, then it can be counted.

January 6, 2020April 14, 2020 Guest Blog 0
The Main Street Mouse
%d bloggers like this:
We use cookies to ensure that we give you the best experience on our website. If you continue to use this site we will assume that you are happy with it.AcceptPrivacy Policy