There are many things within the Disney universe that people collect. Some love to collect and trade the thousands of different kinds of pins that are offered. There are those who enjoy buying the one of a kind lithographs that can cost thousands of dollars. Don’t even get me started on the t-shirts, bags, hats and other soft goods that are offered. There are those who like to get the newest big fig or the newest miniature diorama. A lot of these items can get pretty costly very fast, but there are many items that can be collected relatively cheaply. So if you’re looking for something to buy within the park that can become somewhat of an obsession, look no further. In this month’s newsletter we’re going to discuss “elongated coin pressing” or “penny pressing” as some call it. A pretty cheap hobby that is easy to start and fun to collect. So sit back, check your pockets and couch cushions for some spare change and enjoy this week’s article on “penny pressing”. 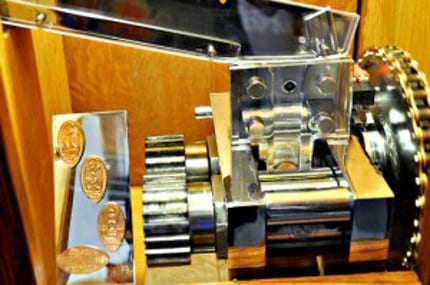 So what pennies should you use? Yes, that can make a difference on how the coin looks after it has been pressed. It is best to use pennies that are dated before 1982. Why? Because pennies older that 1982 were solid copper, unlike 1982 or newer which are copper plated zinc coins. When you press the penny the zinc will show through giving the coin silver streaks throughout the coin. But finding pre-1982 coins is alot easier to find that most would believe. It make take some work, but by going to the bank and buying rolls of coins and going through them all, you will find more than you could probably spend on one trip down to the “world”. The problem with pennies 30 years and older is that most of them will be really dark and dirty. I’ve found that by soaking the coins in a bowl of cola for a day or two will do wonders for a dark coin. It won’t sparkle like a newly minted coin, but you won’t have to worry about silver streaks.

Building the Dream: The Making of Disneyland Park – Floral Mickey

All About The Country Bear Jamboree

One thought on “A little info on Pressed Pennies”

Great Selection of #AlexandAni Bracelets at Hollywood Studios! (They have Snow White too!)