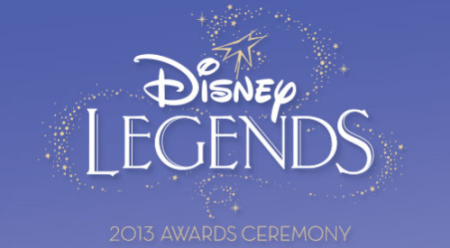 On Saturday, August 10, 2013 at 2:00pm at the D23 Expo, the newest class of Disney Legends will be inducted into the elite group.  This years inductees are an extraordinary class.  Like a Hall of Fame induction in sports, the Disney Legends are the best of the best.  These are the people who are responsible for bringing Disney Magic that will last forever.  The Disney Legends Awards program is a 26 year old tradition of The Walt Disney Company and will be hosted this year by Tom Bergeron, the host of Dancing with the Stars and America’s Funnies Home Videos.

“The Disney Legend Award is our highest and most coveted honor,” said Disney Chairman and CEO Bob Iger. “It’s reserved for the extraordinary visionaries and artists behind the Disney magic, the men and women who push the limits of innovation and creativity to ensure Disney remains truly special. The eight Legends we honor this year helped create some of our most beloved characters along with exciting new worlds and thrilling attractions.  They also entertained millions of people and expanded our definition of what’s possible. They are all indelible parts of our legacy, and we are proud to recognize them as true Disney Legends.” 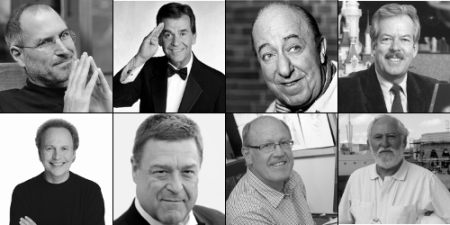 Steve Jobs changed the way the world uses electronics and technology today with his company, Apple.  He was such an amazing innovator and to this day is a inspiration to so many people.  Steve was one of the early investors and chief executive in a little company called Pixar.  When Disney acquired the Pixar Animation Studios in 2006, Steve became the Walt Disney Company’s largest shareholder instantly.  Steve Jobs also beginning in 2006 served on the Disney board of directors where he was a valuable member till his passing in 2011.

Dick Clark, what could be said about America’s oldest teenager?  When Dick broke into the entertainment industry in 1958 with his show American Bandstand, who would have seen him having such a impact on the television industry.  In addition to American Bandstand, he produced game shows, award shows including the Golden Globes and the Academy of Country Music Awards.  Dick is also remembered as the host of ABC’s show Dick Clark’s New Year’s Rockin’ Eve which he started hosting in 1973 until 2011.  Dick passed in 2012 but will always be remembered by millions for his contributions to television.

Ed Wynn was a comedian who started his career in the early 1900’s.  He’s featured in numerous Disney classics frpm the 1960’s , such as Mary Poppins, Babes in Toyland, That Darn Cat, The Absent Minded Professor, and Son of Flubber.  Fans of Disney Animation would recognize Ed as the voice of the Mad Hatter in the original Alice in Wonderland.  He also was used as the physical likeness of the Hatter. Ed had an amazing career and worked until his passing in 1966.

Tony Baxter is someone you may recognize from his countless appearances in Disney specials on Travel Channel to Disney documentaries.  In his 43 year career with Walt Disney Imagineering, Tony has brought some of the most beloved attractions to the parks, including Big Thunder Mountain Railroad, Splash Mountain, Journey into Imagination, and many many more.  Tony is an excellent story teller, his attention to detail, and ability to develop new ideas and attractions by combining time-tested design practices with modern technology makes him a fan favorite.  In my opinion, one day Tony will receive his Window on Main Street also.

Billy Crystal is an acclaimed actor who lends his voice to be the fan favorite Monster Mike Wazowski in Monsters Inc. and Monsters University.  Also Billy’s voice can be heard on the Laugh Floor as the MC in Tomorrowland.   Best known for his memorable roles in When Harry Met Sally, The Princess Bride, and City Slickers.  Billy has won six Emmy Awards and one Tony Award, has also been a fixture on ABC television, where he hosted the Academy Awards broadcast nine times.  Billy’s breakthrough role as Jodie Dallas on Soap from 1977-81.

John Goodman is the voice of  “Sulley” from Monsters Inc. and Monsters University and the partner to Mike Wazowski.  John is also a celebrated actor of stage and screen.  You will also know John for his career as Dan Connor on the Rosanne show that was on ABC 1988 till 1997.  Some of his big films are The Big Lebowski,  The Flintstones,  and most recently Argo and Flight. John’s appearances in Disney-produced films include the Hollywood Pictures films Arachnophobia and Born Yesterday, as well as Touchstone Pictures’ Stella,  Coyote Ugly,  O Brother,  Where Art Thou, and Confessions of a Shopaholic.

Glen Keane has brought to life many of Walt Disney Animation Studios’ most popular characters.   Since becoming a Disney animator in 1974, he has animated classic Disney characters such as Penny in The Rescuers, Elliott in Pete’s Dragon, Ratigan in The Great Mouse Detective, the Beast in Beauty and the Beast, and the title characters in The Little Mermaid, Aladdin, Pocahontas, and Tarzan. In 2010, Glen served as executive producer and animation supervisor for movie Tangled, a story he developed for more than 10 years.

Congratulations to all the inductees of the 2013 Class.

Do You Have A Million Dollar Arm?

August 25, 2019April 16, 2020 Scott 0
The Main Street Mouse
%d bloggers like this:
We use cookies to ensure that we give you the best experience on our website. If you continue to use this site we will assume that you are happy with it.AcceptPrivacy Policy