As The Hunchback of Notre Dame turns 25, makers recall their struggle and triumph against ratings board. 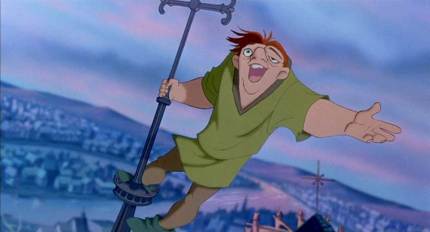 From the New York Times-

“That’s the most R-rated G you will ever see in your life,” said Tab Murphy, a screenwriter of Disney’s animated The Hunchback of Notre Dame, which was released 25 years ago this month.

“Thousands of dollars must have changed hands somewhere, I’m sure,” joked Gary Trousdale, who directed the film with Kirk Wise.

However it came about, a ratings board made up of parents decided that a film with a musical number about lust and hellfire and a plot that involves the threat of genocide against Gypsies was appropriate for a general audience.

Maybe the reason had to do with the studio: Nearly all of Disney’s hand-drawn animated movies had been rated G up to that point. Maybe it was the marketing, which presented “Hunchback” as a complete departure from the dark Victor Hugo novel on which it was based, reframing it like a carnival with the tagline “Join the party!” Maybe the higher-ups at Disney exerted pressure, convinced a PG rating would hurt the box office take. (“It was a G rating or bust,” Wise said.)

But the fact that what is arguably Disney’s darkest animated movie earned a rating on par with Cinderella reflects the subjectivity of the rating system — and how much parents’ tastes have changed over the years.

Trousdale added, “Nowadays, you can’t even smoke in a G film.”

But one scene, in particular, defies explanation.

“That ‘Hellfire’ sequence?” Murphy said, referring to the Stephen Schwartz-Alan Menken song sung by Judge Claude Frollo about his conflict between piety and lust for Esmeralda. “Come on, man. Come on.”

Murphy had long wanted to adapt the 1831 Gothic story of Esmeralda, a beautiful Roma girl who captures the hearts of several Parisian men, including Quasimodo, a bell-ringer with a severe hunchback whom Hugo describes as “hideous” and “a devil of a man.”

But then he realised what he’d gotten himself into.

“I was like, ‘Oh, God, I don’t want to write a singing, dancing, watered-down film that turns this amazing piece of world literature into a typical Disney movie,’” he said.

But, he said, it was to the credit of Walt Disney Co. executives at the time, Roy E. Disney and Michael D. Eisner, that they took a hands-off approach.

“I was never told to stay away from this or that or you can’t do this,” he said. “They were like, ‘You write the story you want to tell, and let us worry about our brand.’”

Of course, the Hugo novel, in which many major characters die at the end, was “too depressing” for a Disney film. So Murphy had to get creative.

He decided the story would focus on the colourful fantasy world Quasimodo imagines while stuck in his bell tower. There’d be a festival. Talking gargoyles. A hero to root for.

Instead of Quasimodo (voiced by Tom Hulce) being whipped on the pillory, he’s pelted with vegetables and humiliated at the Feast of Fools. Hugo’s troubled archdeacon, Claude Frollo (Tony Jay), became an evil magistrate. Disney did not want to take on the church, Trousdale said. Unlike in the novel, Esmeralda (Demi Moore) is saved by Quasimodo and the dashing Phoebus (Kevin Kline), the rebel captain of the guards. All three live happily ever after instead of dying, as both Quasimodo and Esmeralda do in the book.

But, Wise said, there was always one looming issue they had to deal with: Frollo’s lust for Esmeralda.

“We knew that was going to be a really delicate topic,” he said. “But we also knew we had to tell that story, because it’s key to the central love rectangle.”

At first, Murphy tried to tackle it in words.

“I’d originally written a monologue for that scene that was filled with lots of subtext showing that his anger was all about his forbidden lust for her,” Murphy said. “But then Stephen and Alan said, ‘We think that can be a great song.’”

Six months later, a small package from Schwartz, who wrote the lyrics, and Menken, who composed the score, arrived at the Walt Disney Studios in Burbank, California. Inside was a cassette with a new song.

Murphy, Trousdale, Wise and Don Hahn, the film’s producer, gathered in an office, popped the tape into a cassette player and pressed play — and realised what they were hearing.

In a crashing percussive number, Frollo, backed by a choir chanting in Latin, agonises over his lust and his religious faith and his hatred of the Roma.

“This burning desire,” he sings in the film, rubbing her scarf sensuously against his face, “is turning me to sin.” (Schwartz sang the part on the demo.)

“I swear to God, everyone’s jaw slowly started to drop open,” Murphy said. “At the end of it, Kirk reached over, clicked off the cassette player, sat back, crossed his arms, and said, ‘Well, that’s never going to make it into the movie.’ And it did!”

Though it was never stated explicitly, Wise said a G rating was the expectation.

“The studio felt anything above a G would threaten the film’s box office,” he said. “This was before Shrek, or movies that made a PG rating in animation commonplace.”

A G-rated film, according to the Motion Picture Association of America system, which was introduced in 1968, “contains nothing in theme, language, nudity, sex, violence or other matters that, in the view of the Rating Board, would offend parents whose younger children view the motion picture.” Some snippets of language, it says, “may go beyond polite conversation but they are common everyday expressions.”

“We never thought we’d get away with the term ‘hellfire,’” Trousdale said.

The first cut of Hunchback indeed didn’t pass muster for a G — but it wasn’t the use of the word “hell” or “damnation” that the board took issue with.

It was the sound effects.

In the Hellfire number, imagined as a nightmarish, hallucinogenic sequence, Frollo is tormented by hooded, red-robed figures that reflect his slipping grip on reality.

“This burning desire,” he sings, gazing at a dancing Esmeralda figure in his fireplace, “is turning me to sin.”

The ratings board was uncomfortable with the word “sin,” Trousdale said. But the sequence was already animated, and the soundtrack recorded, so they couldn’t change the lyric.

Then Hahn came up with a solution: Make the “Whoosh!” when the hooded judges rush up from the floor a little louder so it would drown out the “sin.” It worked, Trousdale said.

But what ultimately got the film its G rating, Wise said, was a change so tiny that “you’ll never believe this.”

In the scene where Frollo sneaks up behind Esmeralda and sniffs her hair, the ratings board thought the sniff was “too suggestive,” he said.

Neither the posters nor the trailers hinted at the darker themes.

“There was definitely a huuuuuge effort to emphasise the lighthearted aspects of ‘Hunchback,’” Menken said, laughing.

When the film, which cost $70 million to make before marketing, opened on 21 June, 1996, it was a bit of a disappointment at the box office, grossing about $100.1 million domestically. Trousdale said they did get some pushback from parents’ groups about the G rating.

“They were saying ‘You tricked us; you deceived us,’” he said. “The marketing was all the happy stuff and ‘Come to the Feast of Fools; it’s a party!’ with talking gargoyles, confetti and pies in the face. And then that wasn’t the film, and people were really pissed off.”

Tom Zigo, a spokesman for the Classification and Rating Administration, which administers the rating system, said that he could not speak about the specifics of the Hunchback G, but that it was “very possible” that a movie rated 25 years ago would receive a different rating today.

Hahn, Menken, Murphy, Trousdale and Wise all agreed there would be no chance of the film getting a G rating today — or even, Murphy suggested, being made at all.

“Disney was willing to take some chances in that movie that I don’t think they’d take today,” he said. “That’s a PG-13 in my book.”

Yet the movie has stood the test of time — Frollo, Wise noted, feels like a “very contemporary” villain in the #MeToo era — and remains a favourite among young adults who rewatch and discover references they missed the first time around.

“I’ve read posts on fan pages from a few fans in their mid-20s and 30s who were pretty young when they saw this,” Trousdale said. “They’re like, ‘Yeah, this just messed me up when I saw it as a kid, but I still love it.’”

Menken said Hellfire pushed the envelope more in terms of what Disney does than any song he’s ever written.

Follow Me
Michele
Michele Atwood is the Owner/Editor of The Main Street Mouse and it’s subsidiaries and author of the books “Moving to Main Street U.S.A.” “How Many Sleeps Till Disney?” and “How Many Sleeps Till Disneyland?” Michele also contributes Disney news to the Joe Kelley Morning Show on 107.3 WDBO in Orlando. She and her family made the move from Michigan to the Orlando area to pursue their Disney dreams. Michele is a life long Disney fan, and has two sons who have followed suit, each going on their first Disney trip before their first birthday’s. Part of the goal Michele has for The Main Street Mouse is not only to keep members informed, but to create somewhat of a Disney Family by relating to others through personal experiences and opinions. Also, Michele is making it a priority to share stories of inspiration and hope to other Disney Fans in an effort to share the Magic and hopefully make a difference in the lives of others.

Michele Atwood is the Owner/Editor of The Main Street Mouse and it’s subsidiaries and author of the books “Moving to Main Street U.S.A.” “How Many Sleeps Till Disney?” and “How Many Sleeps Till Disneyland?” Michele also contributes Disney news to the Joe Kelley Morning Show on 107.3 WDBO in Orlando. She and her family made the move from Michigan to the Orlando area to pursue their Disney dreams. Michele is a life long Disney fan, and has two sons who have followed suit, each going on their first Disney trip before their first birthday’s. Part of the goal Michele has for The Main Street Mouse is not only to keep members informed, but to create somewhat of a Disney Family by relating to others through personal experiences and opinions. Also, Michele is making it a priority to share stories of inspiration and hope to other Disney Fans in an effort to share the Magic and hopefully make a difference in the lives of others. ~ I enjoy writing personal perspective blogs, doing TMSM Meet Ups for our readers, and keeping the constant interaction going with others, sharing the Disney Magic to people when they can’t be at their Happy Place.

Michele has 6514 posts and counting. See all posts by Michele

April 8, 2020May 20, 2020 Guest Blog 0
The Main Street Mouse
%d bloggers like this:
We use cookies to ensure that we give you the best experience on our website. If you continue to use this site we will assume that you are happy with it.AcceptPrivacy Policy