>Most everyone who comes to World Showcase at EPCOT has a favorite pavilion that they must visit during their trip. To some it may be taking in the romantic atmosphere of the France pavilion while sipping wine and eating a pastry. To others it may be a trip down south to Mexico listening to a Mariachi band, drinking tequila and playing with some maracas. For others it may be heading straight to one of the original concepts that were designed in the planning phase of World Showcase. This weeks article is going to be about the European nation of Germany. 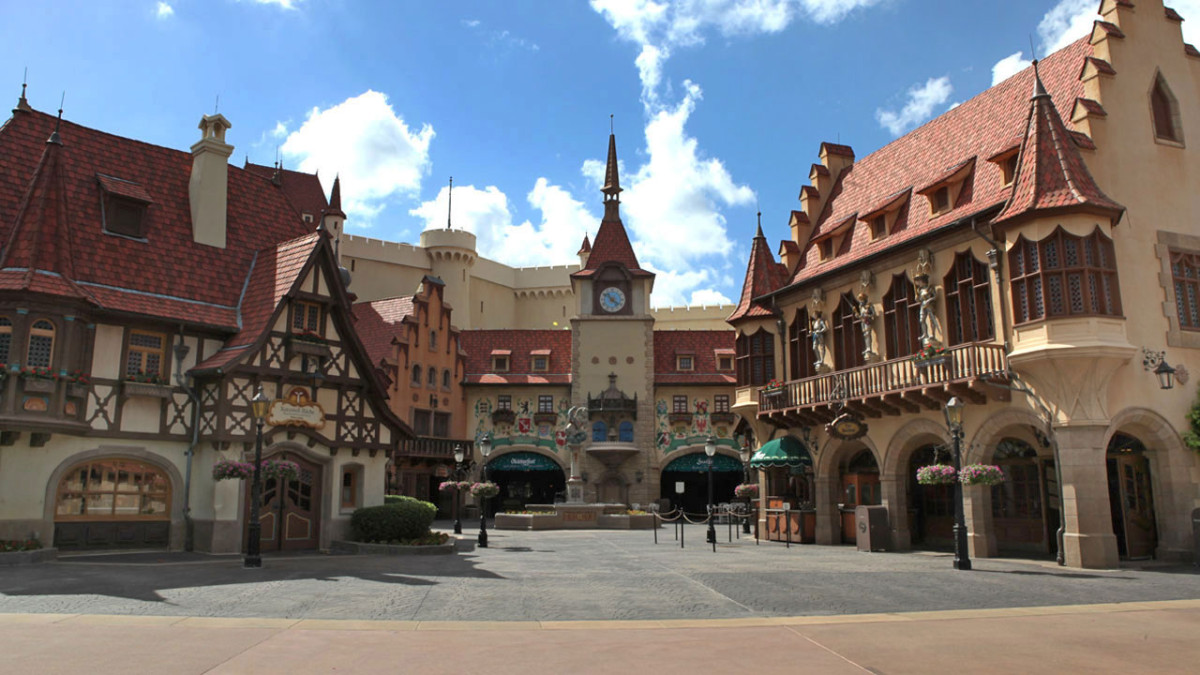 Germany is modeled after a German town set between the 12th and 17th century, with the architecture of the pavilion being modeled after different regions such as Bavaria and North Germany. Walking up to the pavilion one of the first things to catch your eye is the statue of St. George and the Dragon.

Statues of St. George can be found throughout many villages across Germany. The story of St. George dates all the way back to the Middle Ages. Not much is known about the real St. George and there are many variations to the St. George and the Dragon story. In the Golden Legend the story takes place in the country of Libya, within the town of Lasia a dragon has began living in the local lake. Everyday the townsfolk offer the dragon a sheep or two to appease it. When the sheep do not satisfy it they feed it their children, which are chosen by a lottery. One day the lottery fell on the King’s daughter. He offered half of his kingdom and riches to the townspeople if they would spare his child but they would not go along with it. So the day came when his daughter was to be fed to the dragon. Dressed as a bride she was sent to the lake. While waiting for the dragon, St. George came riding by. She tried to send him away but it was to no avail, when the dragon arose from the lake St. George did the Sign of the Cross and charged at the dragon giving it a heinous wound with his lance. He then led the wounded dragon back to the city. Everyone was terrified of the dragon but St. George told them that if they would become Christians and be baptized he would slay the dragon. Everyone converted to Christianity and he killed the dragon. The King built a church on the place where the dragon was killed and soon after a spring began to flow from the alter with water that would cure all diseases.

St. George left the village; sold everything he had, abandoned his knight raiment and went into the midst of pagans dressed as a Christian brother. He began to pray among the pagans and one day the head of the pagans, named Dacian, came in him asking who he was. St. George answered that he was a knight, a gentleman and a servant of God. Dacian then tried to convert St. George but when he refused Dacian had him beaten and thrown into prison. While in prison the Lord appeared to him and comforted him. Dacian then had his sorcerer prepare a strong poison made and it was given to St. George. He drank it and nothing happened. The sorcerer then made a stronger version; St. George turned it up and swallowed it down. Nothing happened. The sorcerer then knelt down before St. George and begged for him to make him a Christian. Seeing that his sorcerer had converted, Dacian beheaded him. Dacian then tried other means of torture on St. George but all failed miserably. St. George then prayed for God to destroy their temples and idols and fire fell from the heavens destroying the temples, idols and priests. Then the ground opened up and swallowed what was left of the ashes. After St. George converted Dacian’s wife to Christianity he had St. George beheaded. Then fire came down killing Dacian and his servants and the ground opened up and swallowed what was left. So next time you see the statue at EPCOT, quiz your friends and family on whom is depicted on the statue.

Something else that’s quick to catch the eye in the Germany pavilion is the clock tower. It is based on one that is located in Rothenburg and has two boy and girl Hummel figurines that appear each hour on the hour. Another attraction that was originally planned but was never made was a boat ride similar to Maelstrom or the Grand Fiesta Tour. In the 1982 book “Walt Disney’s EPCOT: Creating the World of Tomorrow” by Richard Beard it was described as “The future River Ride promises to be as enjoyable as it is informative. An early concept has visitors boarding a “cruise boat” for a simulated ride down the Rhine and other rivers, the ride affording a visual impression in miniature of the cultural heritage of Germany’s past and the highlights of the present. Among the detailed models envisioned are scenes in the Black Forest, the Oktoberfest, Heidelberg, the industrial Ruhr Valley…the possibilities are limited only by the planners imaginations” 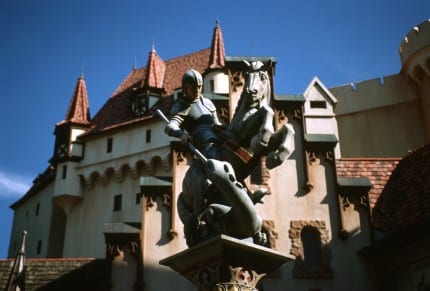 In the 1976 Walt Disney Annual Report it described the River Ride as “a cruise down Germany’s most famous rivers – the Rhine, the Tauber, the Ruhr and the Isar. Detailed miniatures of famous landmarks will also be seen, including one of the Cologne Cathedral.” The building that was going to house the ride was built in time for opening day but it was later announced that the ride would open for Phase 2 of the park expansion. In the beginning the pavilion was a disappointment to the public so Disney later decided that any expansions were to be funded by the country itself and all plans for the ride were scrapped. The ride building is located right behind the Biergarten. The entrance to the restaurant would have been the entrance to the attraction.

The pavilion is also host to two eateries. One is a sit down restaurant, the Biergarten and the quick service, Sommerfest. The Biergarten is a buffet style restaurant that celebrates Oktoberfest year round. Here you can feast on traditional German foods and jam out to a live band. You can also check out some of the German beers if you’re over 21. Do you know how much bratwurst the restaurant sells? It’s said that they sell 13 miles of brats a month in the restaurant.

When you’re in commando mode and don’t feel the need to have a sit down meal, try out Sommerfest. This quick service offers some of the lighter fares such as Bratwurst, a Frankfurter or one of the newer items such as the Currywurst or the Leberkase Reuben. If you’re one of those that have a sweeter tooth then look no further than Karamell – Küche or Caramel Kitchen in English. This shop is sponsored by Storck USA who are the makers of Werther’s Original Caramels. It is the only Werther’s freestanding location in the world. Not only can you get Werther’s candy but you can also get caramel and chocolate pineapple, caramel dipped Strawberries, caramel apples, or caramel popcorn along with other kinds of calorie free foods smothered in chocolate or caramel.

If shopping for German goods is more of your fancy, then look no further than several of the stores located here. Maybe you are looking for an original Steiff teddy bear, if so head on over to Der Teddybär Toy Shop. A seamstress by the name of Margarete Steiff founded the company in 1880. She began with elephants, dogs and cats. Her nephew is credited as creating the first teddy bear. Volkskunstis is another store, in the past they sold crafts and art but has now transitioned to more general German souvenirs such as CD’s and clothing. But they also have a large selection of cuckoo clocks available. If you’re looking to get your drink on with some German wines, then head over to Weinkeller. Here you can choose from over 50 different kinds of wine and you can also sample over 20 different types for a price of course. Das Kaufhaus is the shop to go to if sportswear such as Puma is what you are looking to buy. There is also Die Weihnacts Ecke, a year around Christmas shop that sells the Pickle Ornament and Kunstarbeit in Kristall which sells crystal and jewelry.

Das Kaufhaus is modeled after the Historical Merchants Hall found in Freiburg im Breisgau. Outside the shop on the second story are three monarchs. Who are they you ask? From left to right they are King Phillip I, Emperor Charles V and Emperor Ferdinand I.

To the right of the pavilion is the ever-popular railway garden. This beautifully landscaped attraction showcases LGB trains that are built to run in rain or snow. During the International Flower and Garden Festival, LGB reps have a booth selling some of their trains.

If meeting characters is always on your list then this is where you need to be to see Snow White. On the left side of Karamell – Küche is her wishing well. The Snow White story is known in many cultures but it is the Grimm Brothers German version that is the most popular version. This was the version Walt Disney used for the 1937 masterpiece.

There you have it, the Germany pavilion in a nutshell. As I’ve always said, there is always more to the story here in Walt Disney World and the pavilions are no different. Most of the time there is a reason behind the things you see. So always take time to meander through the pavilions and see what all is involved in the designs of the buildings and statues.

It’s Your Last Chance to See ‘IllumiNations: Reflections of Earth’ at Epcot

These Sleeping Beauty Vinylmation are a Fairy Tale Come True

August 9, 2014April 16, 2020 Scott 0
Do NOT follow this link or you will be banned from the site!
We use cookies to ensure that we give you the best experience on our website. If you continue to use this site we will assume that you are happy with it.AcceptPrivacy Policy