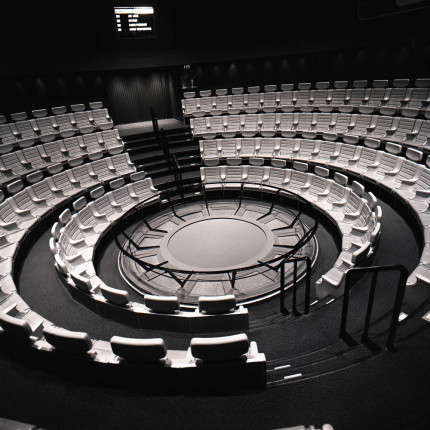 If there’s one film that exemplifies the Disney theme-park-attraction-to-major-motion-picture conversion, it’s Pirates of the Caribbean: Curse of the Black Pearl. Released in the summer of 2003, the movie was a surprise smash and went on to spawn a hugely successful franchise (the fifth film, Pirates of the Caribbean: Dead Men Tell No Tales will be released on July 7, 2017). But there were others: the same year Pirates of the Caribbeancame out, the Eddie Murphy-led horror comedy The Haunted Mansion was released and a full year before The Country Bears, based on the popular Frontierland show, stormed into theaters. But way back in 2000, a film was released into theaters based, in part, on a forgotten Disney attraction. And what’s more—it helped inspire an all-new attraction. It is the ouroboros of movies based on Disney theme park attractions. It is Mission to Mars.

In 1973, as part of a major overhaul, the Flight to the Moon attraction (a staple, in various forms, of Disneyland since 1955) was changed to Mission to Mars. This was necessitated by the fact that, after more than a decade of fantastical moon landings, in 1969 we actually achieved the impossible and visited the moon. The original version of the attraction had guests entering a large, circular auditorium with two screens: one on the ceiling showing you where you were going and one on the floor, showing you where you had been. According to a pre-recorded spiel, the room had been “carefully designed by scientists and engineers to look like a real passenger space ship of the future.” What followed was a precursor to the simulator rides like Star Tours and the new defunct EPCOT attraction Body Wars, with pseudo-scientific narration, projection effects, and in-theater jostling.

As you entered into Mission to Mars, you were greeted first with a control room, featuring then cutting-edge animatronic figures that talked about what the first manned mission to Mars would be like. While footage ran on screens, a robotic scientist talked about things like “the way crystals form in zero-G.” After that you were ushered into that circular theater that had been used from the Flight to the Moon days, which did have the feeling of looking a lot like the inside of a modern airplane. “Side screens” showed the diagnostics associated with the trip, including how far away you were from earth and how close you were to the red planet. Narration would play about the nature of the voyage, with phrases like “Mars acquisition velocity” and “hyperspace penetration commencing” being used without much context. Given the placement of the ride in Tomorrowland, there were also references to how this kind of space travel is now “routine” but that “back in the ‘70s and ‘80s would have seemed like science fiction.” Dangers like meteors and black holes were detected and barely avoided. You’d travel in space and live to tell the tale. 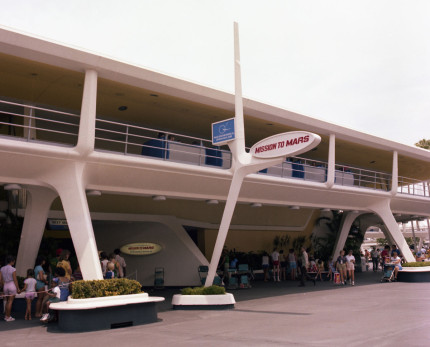 By the fall of 1992 though, Mission to Mars, flanked by more high tech attractions like Star Tours and Space Mountain, quietly closed its doors. (The Magic Kingdom version of Mission to Mars, which also opened in 1975, would close almost a year later, in the fall of 1993.) At one point the space in Tomorrowland was allocated for a brand new attraction, part of the ambitious Tomorrowland 2055 project. But, thanks to extreme costs associated with the EuroDisney project (later renamed Disneyland Paris), most of the ideas planned for Tomorrowland 2055 were scrapped. Instead of a daring, colorful vision of the future, the Imagineers instead leaned on a Jules Verne-esque version, full of muted colors and vaguely steam punk-y designs. In 1998 the former Mission to Mars space reopened as … a quick-serve pizza joint. (At least in Florida the space was re-appropriated for the ahead-of-its-time ExtraTERRORestrial Alien Encounter attraction.) But that wasn’t the end of the Mission to Mars story.

In the early 2000’s, Chairman of the Walt Disney Studios Dick Cook began an initiative to turn theme park attractions into films. There was some waffling as to whether or not these productions would wind up on the big screen (as Pirates of the Caribbean eventually did) or be relegated to direct-to-video or cable premiere status (as Tower of Terror, based on the new ride at the then-Disney-MGM Studios, did in 1997). One of these projects was Mission to Mars. While only tangentially connected to the ride, the movie featured themes of heroic space exploration in matter-of-fact, scientific terms. As directed by Brian De Palma, one of cinema’s premiere visual stylists, Mission to Mars featured the filmmaker’s flair for dramatic, unbroken shots and a robust musical score (its organ-heavy music predated Interstellar by more than a decade). But, as anything based on a Tomorrowland attraction should, the movie eschewed the director’s typically nihilistic penchant for sad endings and instead featured a more optimistic, forward-thinking conclusion, in which discovery and hopefulness prevail. It also marked the end of a decades-long attempt by Disney to make a movie set on Mars; in the late ‘80s an adaptation of Edgar Rice Burroughs’ John Carter of Mars was mounted with Die Hard filmmaker John McTiernan directing Tom Cruise. (The company would finally make the film in 2013 with Finding Nemo director Andrew Stanton and Friday Night Lights star Taylor Kitsch.)

In the film Gary Sinise played Jim McConnell, an astronaut who goes to rescue a colleague (Don Cheadle) who has been stranded on the red planet. Much of the film is devoted to the actual space journey, which mirrors the attraction’s combination of real-life science and fantastical scenarios. When they reach the planet, it goes into all-out science fiction territory, but it all works. It might not exactly line up with the philosophy behind the original attraction, but it still feels mightily Disney (even if it was, due to the film’s intensity, released by Touchstone). In spirit alone Mission to Mars more than paid its dues. 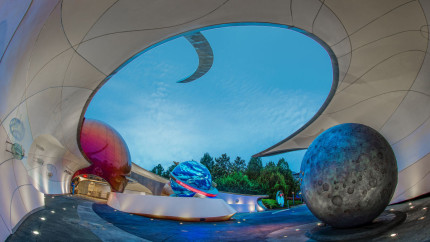 A space-themed pavilion had always been planned for EPCOT. Back in the ‘70s work began in earnest on a sprawling spaceport and adjacent ride. Illustrations from the period show a glittery, prismatic building that would probably make your jaw drop as soon as you entered it. When EPCOT Center struggled financially after opening in 1982, the plans were put on hold. But in 1991, on a prime time special devoted to the history and future of Walt Disney World, that same space port was mentioned as being in the works for EPCOT’s Future World (presumably in the not-too-distant future). Instead, a space-themed attraction, much smaller and more manageable than the Imagineers’ original plans, would open in the summer of 2003.

Mission: SPACE stood in the spot once occupied by Horizons, an attraction dedicated to the promise of tomorrow that ended with a choose-your-own adventure mode that saw you picking your future home underwater, in deep space, or in the desert. Mission: SPACE featured an interactive centrifuge that had visitors perform tasks connected to a manned mission to Mars. Each person in your four-person pod has to do something to insure that the mission is a success. Like the original Mission to Mars, it is, more than anything, a simulator attraction with screens that you look at and sensations that make it seem like you’re traveling through space. Of course, this was a much higher tech variation, with actual weightless simulation that feels thrilling and bizarre all at the same time. This was Mission to Mars for the next generation. And not only was it connected, thematically and through the actual attraction-type to the original Mission to Mars but it also tied back to the Mission to Mars movie.

Well, the host of the attraction is Gary Sinise, who starred in Mission to Mars. He’s playing the same character, more or less, although his name is never uttered. And the same kind of rip-snorting sense of scientific adventure that was the heart of Mission to Mars is very much present and accounted for in Mission: SPACE. The same sentiment that started in 1973 in Disneyland is still wowing guests in Florida today. Even though the attraction and film built around the concept is notably futuristic, this is a story that is, at its heart, simply timeless. 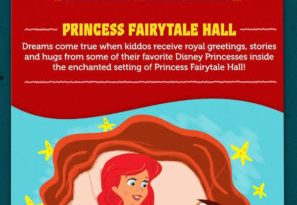 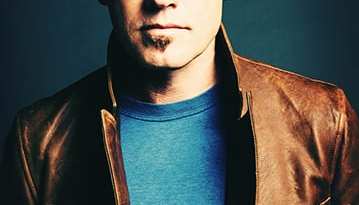 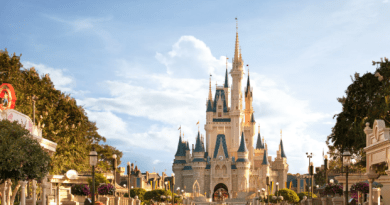 Does it Lose its Magic? My Thoughts!

The Schedule for our Big Annual Meet Up on November 12th is here! #tmsmmeetup

April 29, 2022April 29, 2022 Guest Blog 0
The Main Street Mouse
%d bloggers like this:
We use cookies to ensure that we give you the best experience on our website. If you continue to use this site we will assume that you are happy with it.AcceptPrivacy Policy