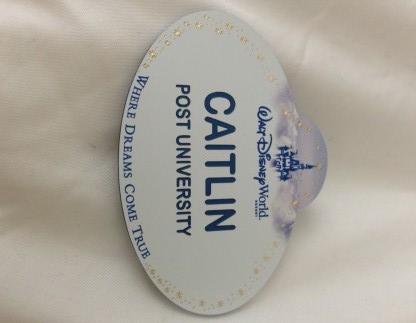 I finally got to go to Walt Disney World for the first time when I was 19, my mom wouldn’t take me and if I wanted to go I’d be paying for myself. So I went and I was hooked on the magic. When I decided to apply for the Disney College Program I was bored of my life in the NorthEast and needed some adventure, what’s more adventurous than moving across the country? I was told that the application and interview process for the DCP (as I would come to refer to it) was really tough and selective. Some how I got through everything in less than two weeks and was assigned my start date. I had joined some groups on Facebook and made friends wit other young adults who were going to work at Walt Disney World for 4-8 months. I obviously signed up for the eight month program- I had no intentions of moving back north anyways. 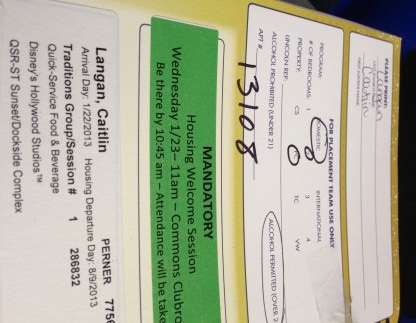 January 30th took forever to come, I arrived in Orlando the afternoon before check-in and was staying in a hotel room with one of my new roommates. She was from the West coast and had never even been to Florida before. We met up with our other two roommates for dinner and you could tell we were all excited but more so nervous. I did my college program in 2013, mine was the last program in which you had to line up to get your apartment and work assignments. We went to one of housing complexes at 3am! There were already about 50 other students there waiting for sign-in, which wasn’t until 8am. The next hours involved running to the 24 hour gas station and spontaneously singing Disney songs with my 300 new best friends. Then FINALLY 8am came and we began the long process of beginning our new lives as Cast Members. 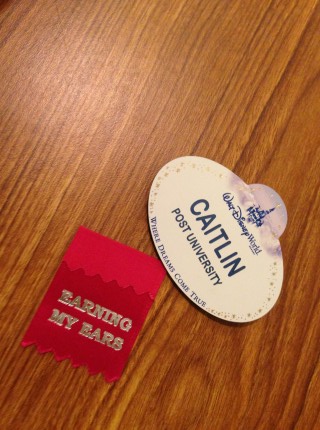 First we waited in line to get our work assignments. I already knew that i’d be working in Quick Service Food and Beverage, but that could be anywhere really. I really hoped I’d be working in the Magic Kingdom, anything really except a resort! I just wanted to be where the people are…. I got Hollywood Studios! I would be working at Sunset Ranch which encompassed almost every restaurant on Sunset Boulevard including Min & Bills boat. The next few hours included getting our apartment and keys, getting all of our dates and times for the magic to begin happening. The energy was electric and I couldn’t get to the rest of Disney World life fast enough! 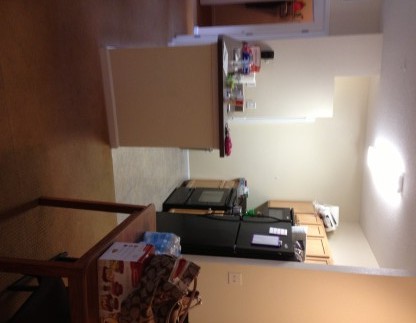 All of the apartments come fully furnished with everything you could need, sized from one bedroom all the way up to four. We chose a 2 bedroom in the most expensive complex, Patterson Court. (Expensive being relative of course, I believe it cost $92 bi-weekly) We had heard that it was really nice and quiet, none of us are really into partying. After we got all moved in and did our grocery shopping we just left our front door open and it was just like living in a dorm! People from all over came over to visit, we wandered around and visited with all sorts of new people. We had spent the afternoon going to meetings and learning about all the do’s and don’ts of living in College Programming housing, so it was nice to just hang out with all our new Disney obsessed friends. 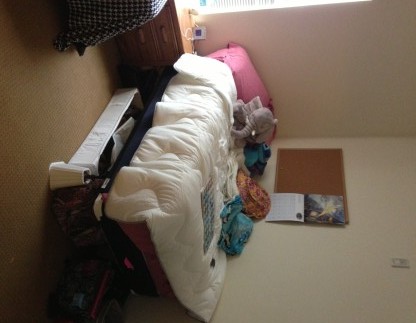 Move-in day was a Tuesday and my day for Traditions was Thursday morning, all of my roommates had different classes and times on the same day. Traditions was nothing like I expected. Yes, it was long, but it was also like being welcomed into a new family. Everyone was so nice and I learned so many interesting things. My group won a contest for who could write down the most Disney characters in 60 seconds, as you can imagine the lists were quite long. Then came time to go into the Magic Kingdom… the back way! We came onto Main Street from a side gate, on the side street just after the Bakery. Anyone who had never been to the Magic Kingdom got to enter first (I had been once before so there I was in the back…) We toured for about an hour and then went back to the classroom to get our name tags and ID cards. There were tears all around the room and it felt like all my dreams were coming true. I didn’t have to start work until Sunday so I was able to spend the next two days visiting the parks and living the dream! 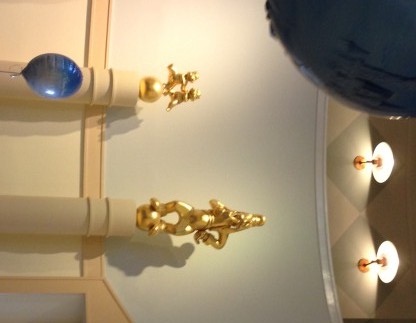 When Sunday finally rolled around I had to be at work at 7am, and I had decided to take the bus there rather than my car because I wasn’t quite sure where I was going. Housing is less than 10 minutes away from the parks, but the buses make many stops so I was on the bus at 6am. I hadn’t been up that early since high school. When I finally got to costuming I found a group of new cast members that were working where I was and we waited for our trainers. The most bubbly cast members came moments later and showed us how to find our costumes and how to check them out. I could not believe that I had to wear this costume. Honestly though, me being me, I had wanted a ridiculous costume.. life is just more fun that way. As time went on I would discover that my costume was actually one of the more comfortable ones. 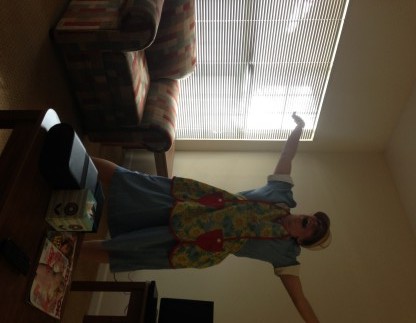 A week of training later I was able to work in any position within my complex and I had already made tons of friends. I felt like I was finally with my people! We were all goofy, Disney loving young adults, we worked hard and played harder. Work was hard though. I had worked in many restaurants before, but this was on such a grand scale. I had worked as late as 3am for special parties and as early as 6am for special projects. The hours were long, the work was hard but I got to meet some amazing guests from all over the country. Some even from hometown! I met people the nicest annual pass holders and had lines and lines of cheerleaders and Brazilian tour groups.

The months flew by, I could write for days on all the amazing things I did and people I got to meet. Before I knew it, it was May and graduation day was here. I had said good bye to many friends already who had left their programs early, or who had left at different times than me. Ultimately I just couldn’t stay on as a college programmer, even though I could have extended for another 6 month stay. I just couldn’t afford it financially. I wasn’t ready to leave Florida quite yet. I went and got myself a studio apartment, a serving job at a local restaurant, a job at Universal Studios and an Annual Pass to Walt Disney World.

I had lived my dream in Florida for nearly a year before I had met my boyfriend and fell in love with someone other than Mickey Mouse. Now here I am, two years later, in upstate New York dreaming of my next trip to the sunshine state.

Internships & Programs for WDW and DL Canceled for Fall