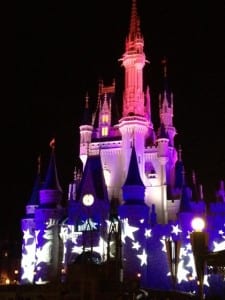 Hello Main Streeters! My name is Kyle and I’d like to share my experience of Disney during the Fourth of July. Let me introduce myself a little further though, I’m 29 years old, have lived in Florida for almost 20 of those years, and didn’t visit Disney until I was 28. That, of course, was only in January of this year when I became an Annual Passholder.

I started out my day with a trip to Animal Kingdom (AK) to ride Everest. Since I was staying at Pop Century, I hopped on the bus and headed over. I got to the park with about 20 minutes left until the it opened. While waiting, I saw a CM walking down the lines with a small basket. I wasn’t able to see what he had in the basket until it got to me. They were small American Flag pins! Since I already had my The Main Street Mouse button on, I put the flag right next to it.

After Everest, I headed over to Hollywood Studios (HS) to complete my FastPass selections. For those of you who are wondering why I would go to HS instead of Magic Kingdom (MK), the answer is simple. I like the attractions at HS. Don’t get me wrong, I like the attractions at MK just fine, but the ones at HS are just more to my liking. After I got done there, I headed back to Pop to cool down. I had a reservation at Rose & Crown in Epcot for lunch so I changed shirts and walked out to the bus stop.

I got in the queue and waited for the bus, stealing a glance at my watch every few minutes. The bus did not come. I looked up at the sign and it read, “Before 2 pm use Downtown Disney(Transfer required).” I looked at my watch and determined that I did not have enough time to wait on the bus, get to Downtown Disney, transfer to the bus for Epcot, and then ride there. So, I got in my car and just drove.

Once there I was able to get in and find a close place to park. Seeing that it was almost two O’clock in the afternoon, I was pleasantly surprised. I walked from my parking spot to the front ofthe park and got in. After making almost a mad dash back to the United Kingdom Pavillion, I got a pager and was told it would go off whenever they were ready for me. While I waited, I walked around in the shops, trying to keep as cool as you can in Central Florida in July. My pager went off and I headed back to Rose & Crown. I got seated and my fellow TMSM Member, Mair é ad(pronounced like parade with an M), came and served me. She was great. I got the fish and chips and she was able to stop by several times before my food was ready. She brought my food out and it was really good.

After I was done, she came back and asked if I’d like some desert. I didn’t have any room left,but she said that she had a desert menu for me anyway. When she handed me the menu I turned it over to see what was on the other side and was pleasantly surprised to find a note that read, “Kyle, Thank you for visiting the Rose & Crown! from Parade with an ‘M’ ! :)” Then, she reached in her pocket and pulled out a light up Buzz Lightyear clip-on. I gave her my TMSM Button because she said that she wanted to get one when we were talking earlier but wasn’t sure if she would be able to since she was leaving so soon. She thanked me and gave me a hug and a refill to go. We got a picture of me and her with her new button and I went back to Pop.

While at the resort, I walked around and took photos of the grounds. I shot some of the things in the main lobby, the courtyard, and the pools. It was about 5:30 when I began to head over to the bus stop. The bus came, I hopped on board with the other people in the queue, and we were off to MK. While on the way, I met a woman named Linda and she was having difficulties with her iPhone but had left it in her room. I said that I would be glad to take a look at it, if she didn’t mind. She said that would be great and that she would buy me breakfast in exchange for looking at her phone. She continued to describe the issue to me just so I could get a better idea of what was going on with it. Once we got to MK I was busy texting Janel Adani and her family. They said that they were going to be in MK for the fireworks and she would like to meet up. I got there and was waiting for them to finish up there FastPass with Anna and Elsa. While waiting Janel suggested to put a shout out to the Fan Nation on Facebook and invite anyone who was in MK at the time, to join us for the fireworks. I put the post out and waited for any responses. Nobody showed. Janel and her family got done with Anna and Elsa and joined me behind Prince Charming’s Regal Carousel. From there we met up with Donna Sosa and her family. We all stayed together to watch the fireworks.

As the time for the fireworks drew closer, the crowd around the carousel became thicker. Pretty soon, you wouldn’t have been able to move if you had wanted to. The time came for the fireworks and they were spectacular. It was an immersive experience as it was a 360° display. The crowd erupted in cheers as the Grand Finale completed. Then, the flood started. We stayed where we were for a good 10-15 minutes after the fireworks had completed. After we were able to move we headed out towards Fantasyland and rode Under the Sea ~ Voyage of The Little Mermaid.

Once that ride was finished, we went into Tomorrowland and got some waters to refresh ourselves. Once we were refreshed, we got in line for Buzz Lightyear’s Space Ranger Spin. While on the ride, it stopped and we were able to rack up some serious points. Mike, Janel’s Husband, maxed out the counter with all nines across the board. After we done with that, we all decided it was a good time to head back to our respective hotels and get some rest for the next day.

The Tropical Hideaway Discovered in Adventureland at Disneyland Park

August 23, 2021August 23, 2021 Scott 0
The Main Street Mouse
%d bloggers like this:
We use cookies to ensure that we give you the best experience on our website. If you continue to use this site we will assume that you are happy with it.AcceptPrivacy Policy