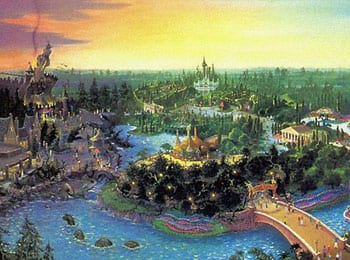 I’m going to write a small disclaimer about this article. This is my opinion. I’m one of the people that doesn’t mind change or looking forward to something new in the parks. I will rarely say anything that I disagree with Disney and their decisions, but this time it’s different. As most Disney fans know, the Avatar themed land is coming to Animal Kingdom in 2017. Now Avatar was a huge film, at the box office. There are sequels already planned for the franchise. James Cameron is a great filmmaker, there is no doubt.

We are all fans of Disney and the new land might just be amazing and a great area to visit, Disney doesn’t make many mistakes. They will do research as they always do and they will make it a fun place for sure. I’m sure they are going to have areas to educate guests on the Earth and how to not have happen what did in the movie to our planet. I know my opinion on this will not change Disney’s mind on the land. They are moving forward on this at Animal Kingdom as Camp Minnie Mickey is already set to close in 2014 for construction to begin. That brings up my first point, why are they closing a land to build a new one? Isn’t there plenty of room already on property so that they could just expand the park? Our family loves Camp Minnie Mickey. It’s a great place to meet characters for sure and see The Festival of the Lion King. Now I could be wrong, but I believe “Festival of the Lion King” is one of the best shows on all of Disney property. Its one I always make sure to see. We love the performers, the music and the show.  The “Festival of the Lion King” is moving to Africa, so I’m glad its not going away for now. Disney created “Festival of the Lion King” for Camp Minnie Mickey. They even used floats from Disneyland’s “Lion King Celebration” parade. Camp Minnie Mickey was never suppose to happen, that land was originally going to be “Beastly Kingdom”. Disney knew it was going to be expensive to build that land so they waited. They created Camp Minnie Mickey quickly and didn’t spend a lot of money as they thought one day the Beastly Kingdom would come to be and all would have to be torn down and built for more of a permanent land. Granted there isn’t a lot in Camp Minnie Mickey but I’m going to miss it, as now it seems the permanent land is going to be Avatar.

Now as a Disney fan, are you looking forward to seeing this land? From the comments I’ve seen the majority of fans don’t seem to be interested in this at all. Some are even downright upset. I understand the reason that Animal Kingdom was chosen for the land was because the premise of the film deals with the environment and the natural resources of Earth being depleted.

Animal Kingdom is a park where the animals and the environment are given priority. Disney has made every effort to make sure things are done to never harm the animals. From the paper straws so that plastic isn’t available to harm the animals, to closing the park early to allow the animals a time to relax and not be on “stage”. There are no fireworks to bother the animals and they are allowed to freely roam in their environments. If you are on the Kilimanjaro Safari you have heard them say they won’t beep to move an animal. They let them do what they want. We go into their environment and as humans who are we to move them? If you have stayed at the Animal Kingdom Lodge, you have seen the animals roam up close to the rooms. But what about Avatar makes it fit into Animal Kingdom?

The other lands in Animal Kingdom all relate to real lands of the world or real times on Earth. Its true no one on Earth has rode a ride to go back in time and hunt down a dinosaur, but dinosaurs did exist. We can’t go to Mount Everest and find the Yeti as no one has seen it for real, but thousands of people have searched for the mysterious animal for hundreds of years. There is even a carnival, which in the summer months you can find one in any state. But why Avatar in Animal Kingdom? To me this sounds more like something that is a fantasy. Now would it fit into the Magic Kingdom? How about Epcot as this deals with the future and might fit into Future World. What about the Studios? They are already planning the Star Wars Land which alone will bring more people to the studios everyday, maybe this would help to get even more people to spend time there. To me and others I have talked to, Animal Kingdom is the park that is “real”. There is fantasy in the rides, but not a full land of fantasy.

I’m sure there are many people who are looking forward to Avatar Land. I haven’t looked but I would be willing to bet there are fan sites talking about the film. I’m sure there are fans that loved the movies so much that they dress as the characters for a comic book convention or costume party. It just seems to me the majority of people who are the Disney loyal are not happy about this. Something else bothering me is Disney has always talked about protecting the animals, but now with Avatar they are going to be open later and have a nighttime spectacular? Is this suppose to be the time that the animals are resting? I’ve always applauded that Disney put the animals first and it wasn’t about making more money to stay open later or have more evening events. Now it seems part of that is going out the window with the change all of a sudden for a new land that isn’t getting much positive opinions.

As we all know, Disney puts a lot of thought into what they do. As die hard Disney Fans, I guess we just have to wait and see what happens, and have faith, trust, and pixie dust that Disney will make the new Avatar area just as great as other attractions on property. TMSM has received so many complaints regarding the new land, and how unhappy the Disney Community is because of the plans. I wish we could say we had a way to fix it, but we don’t. We will all just sit back together, and watch and wait. Let’s hope the Disney Magic shines through once again!

One thought on “Avatar is coming, but why Animal Kingdom?”

April 3, 2014April 16, 2020 Scott 0
The Main Street Mouse
%d bloggers like this:
We use cookies to ensure that we give you the best experience on our website. If you continue to use this site we will assume that you are happy with it.AcceptPrivacy Policy