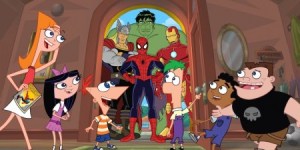 If you started to sing those lines you may have realized it was the opening to the hit Disney show Phineas and Ferb. But the title of the article is Mission Marvel so why are we talking about Phineas and Ferb? On Friday August 16, 2013 the Disney channel will have a crossover special when Phineas and Ferb join forces with Spider-Man, Hulk, Thor, and Iron Man to save the world.

The story line has the Marvel super heroes existing in Phineas and Ferb’s universe. They are fighting crime in New York and the comic books reflect the real lives of these heroes. One of Professor Doofenshmirtz’s inventions accidentally zaps the Marvel characters’ powers. In a effort to get their powers back the Superheroes go to Danville. Things do get confused a bit when their super powers get mixed up, and Phineas and Ferb must help save the world. The Marvel villains Red Skull, Whiplash, Venom and M.O.D.O.K. make their way to Danville also.

You maybe thinking where is Agent P? Well the crimefighting platypus will be included. He will be in his own superhero costume and on a motorized surfboard.

Because the Marvel heroes are drawn a lot different than Phineas and Ferb the artists had to change the appearance of the characters a little bit to have them blend in better. What they did was just increase the size of the Marvel characters heads to fit in the show’s world. The writers though had to stick to some rules Marvel has on their characters. One big rule they had to take into account was that the heroes always had to seem heroic. Even if the joke is on them they had to be doing something that was not uncommon for their character.

Dan Povenmire, who created Phineas and Ferb with Jeff Marsh said, “We made sure we had enough time to do it right. We worked with Marvel and made sure all the humor worked without belittling their characters. It turned out really great.” He also said “It’s a great Phineas and Ferb episode and it’s also a great Marvel episode. You can look at it either way.”

Jeph Loeb the head of Marvel Television said “This is a real Marvel superhero operation” and “It’s an extraordinary opportunity for these two franchises to come together and create an adventure never before seen in the world of Marvel and Disney.”

There is already talk within the Phineas and Ferb team of a second Marvel special. Some of the inventions that Phineas and Ferb come up with intrigue Tony Stark enough that he offers the boys internships and that would bring the framework to creating another special.

In bringing the 2 universes together the voices behind Marvel’s animated TV series will also voice the characters for the special so the voices will be familiar to fans of that series. You will even hear from Stan Lee in the episode.

Viewers will get their first glimpse of the special on Monday August 12th. Disney has also devoted a new online game to this special which will go live on July 26 at DisneyChannel.com/MissionMarvel

Maybe a hint at another future crossover, Povenmire after learning of Disney acquiring Lucasfilm and Star Wars drew a picture of Doofenshmirtz as Vader and texted it to the head of Disney TV.

Scott has 3516 posts and counting. See all posts by Scott

New Cash Registers and Floor Plan at the World of Disney Store!

April 28, 2019April 16, 2020 Scott 0
The Main Street Mouse
%d bloggers like this:
We use cookies to ensure that we give you the best experience on our website. If you continue to use this site we will assume that you are happy with it.AcceptPrivacy Policy